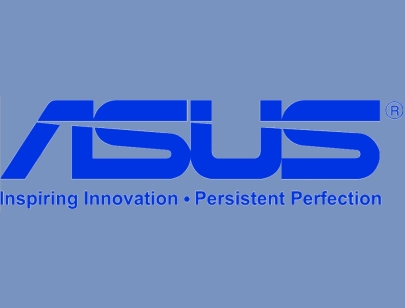 As said previously, to make the most of Asus DIP, you must install a piece of software known as AI Suite II. Here you will be able to access all features pertaining to the EPU and TPU. To start off, we will have a look at the EPU

The Asus EPU is a stand alone unit that aims to reduce power consumption under various circumstances. Without installing AI Suite, you have access to the "Lite" features, which actively enables/disables motherboard power phases and CPU frequency/voltage on the basis of system load. After all, the less components enabled, the greater the efficiency.
With AI Suite II, you gain access to a wider feature set as the table below shows.

For many, features such as HDD and Fan spin down may seem quite petty but when your wallet is as tight as ever, those pennies will count towards the day your energy bill arrives. 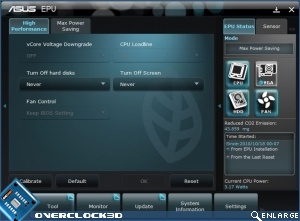 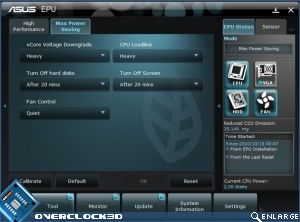 The Fan Xpert portion of EPU allows you to set a variety of fan speed profiles as well. The tool calibrates itself to determine the rotation frequencies of your fans at given percentages of duty speed. Unfortunately it didn't appear to work all that well with our low speed Noctua fan. 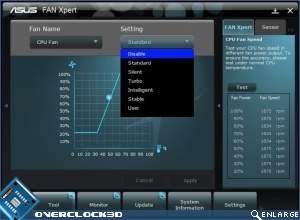 EPU offers three presets. Max Performance, Max Power Savings and Auto. It is also possible to customise those settings by changing the extent to which your system powers down HDDs, Fans and Monitors.

The program itself is intuitive and easy to use for novices. Furthermore, the application itself has a very low memory footprint. This is all great but does it really deliver?

The results are quite self explanatory really.

To break things down, we saw a 7-9% decrease in power consumption by enabling Active Power Phase Management. After installing AI Suite II and applying the "Maximum Performance" profile, we saw near identical results.

Next up, we found a further 2W (idle) and 20W (load) decrease in power consumption by enabling Maximum Power Savings. This was achieved by dropping CPU voltages from 0.88V to 0.80V and fixing the processors frequency to 1200MHz. Obviously this is of little use when running applications that need plenty of CPU grunt, but this is a great option for day to day system usage.

Finally, the Automatic profile function offered the best of both worlds. Under this mode, we were able to leverage the EPUs ability to further drop idle voltages, while enjoying a fully fledged processor once system load peaks.

There was a minor limitation in our testing procedure in that our Radeon HD 5670 graphics card was not of the Asus variety. If it were, the EPU would have also been able to reduce GPU power consumption as well.

Impressive stuff. Let's take a look at the TPU division of DIP.