The ASUS Prime series is about one thing, providing a rich feature set at a low price point, coming with its iconic white aesthetic and a minimalistic design.
Today we will be looking at ASUS' Prime X370-Pro, a motherboard that makes up the company's low-end X370 lineup and is currently available for around £154.99, making it one of the most affordable motherboards with AMD's new X370 chipset. 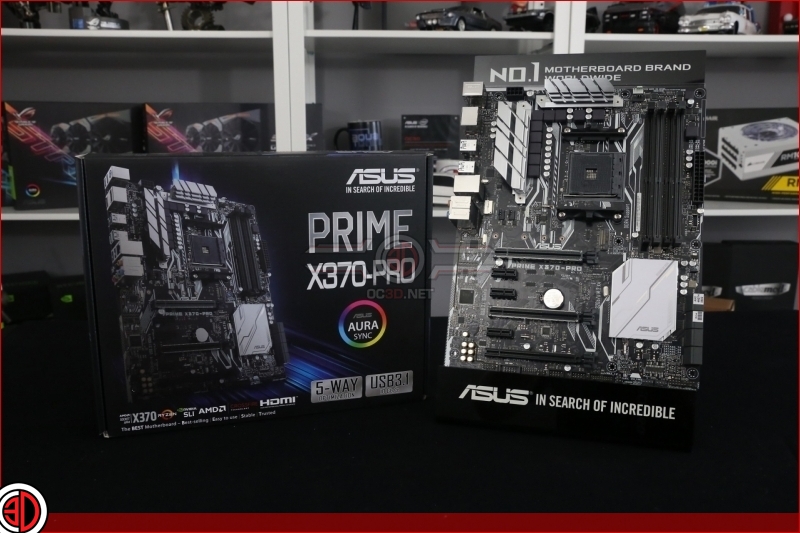 From the first glance, we can see that the Prime X370-Pro is no slouch, coming with a beefy 8+2 VRM configuration, two reinforced PCIe lanes and support for modern M.2 storage devices, features which are key to getting the most out of AMD's new Ryzen architecture.

This is not a motherboard where users will find an excessive use of plastic coverings, an abundance of RGB LEDs and fancy, but practically useless features like U.2 and SATA Express support (name a manufacturer that makes a consumer U.2 SSD apart from Intel?). This board is designed to perform where it matters, with a great power phase design, support for SLI and Crossfire, enhanced ASUS Realtek audio and support for plenty of USB 3.0 and 3.1 Gen2 devices. 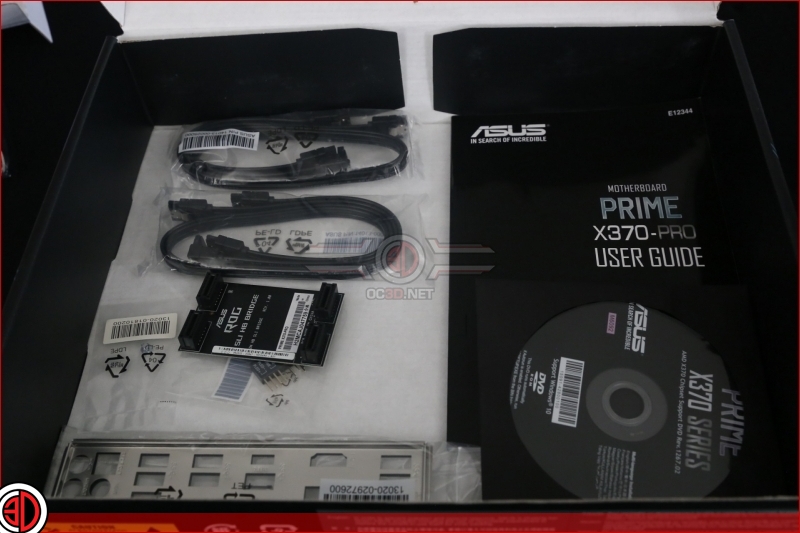 In the box, the Prime comes with everything that the user will need, coming with a plain IO shield, four SATA cables, a Nvidia high bandwidth SLI connector, a driver CD, an M.2 screw/standoff kit and the board's instruction manual.

Looking at the motherboard itself we can see that there is an abundance of 4-pin fan headers, with six coming on the motherboard. These can be expanded upon by using fan splitters, easily allowing the user to install up to 10 fans and power an AIO liquid cooler on a dedicated 4-pin connection. 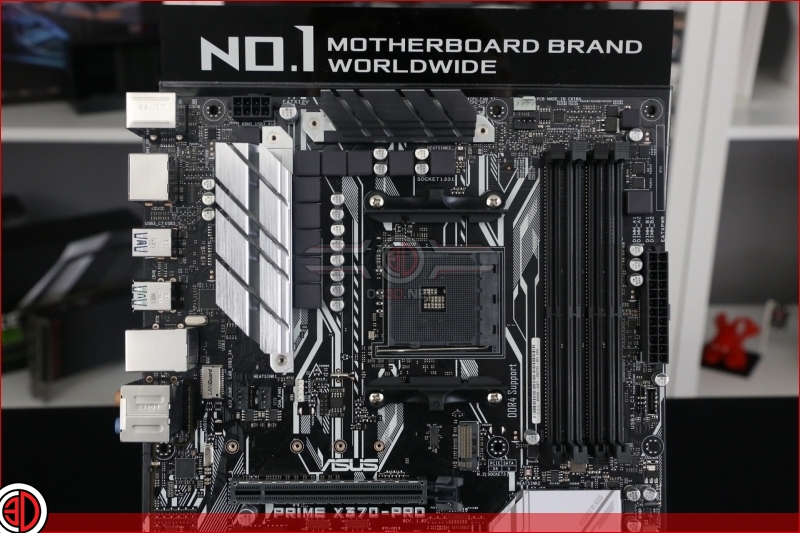 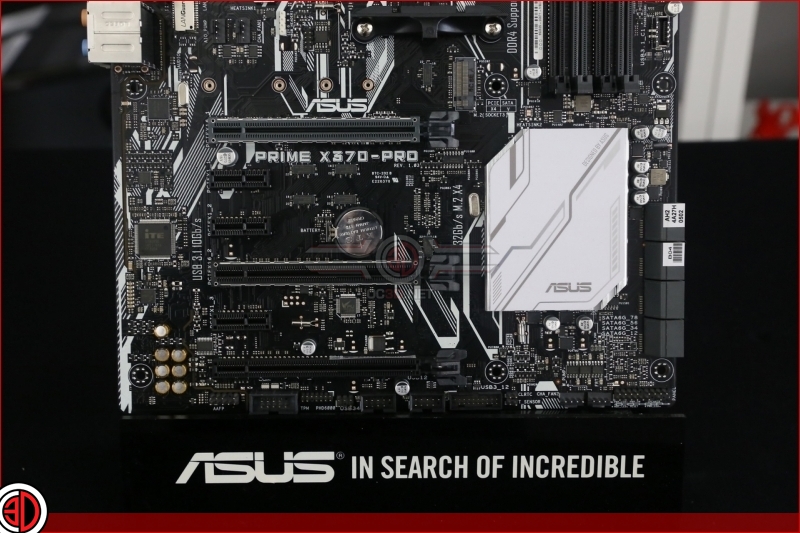 At the top of the X370-Pro, we can see that there are 4 DDR4 DIMM slots, which ASUS states can support up to 64GB of memory with speeds of 2133,2400 and 2666 out of the box, with support for 3200MHz memory in OC mode.  In our review we will also be testing of this motherboard is capable of even higher memory speeds with our Ryzen 7 1800X, though you will have to wait for our full review to see those results.

We can also see that under the CPU socket that this CPU supports an M.2 device, with this motherboard supporting PCIe 3.0 4x speeds when using a Ryzen CPU. Just above the M.2 slot, there is an RGB header, which can be used with AMD's Ryzen stock coolers and other RGB devices to provide users with a custom lighting experience. 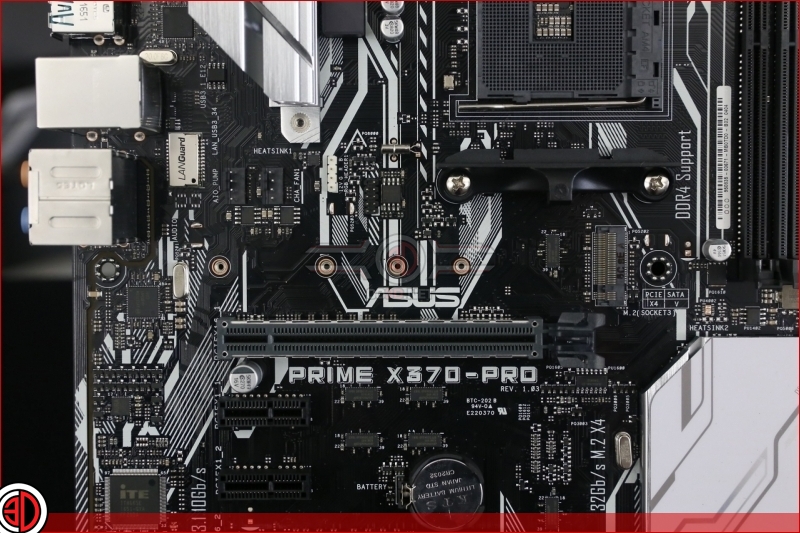 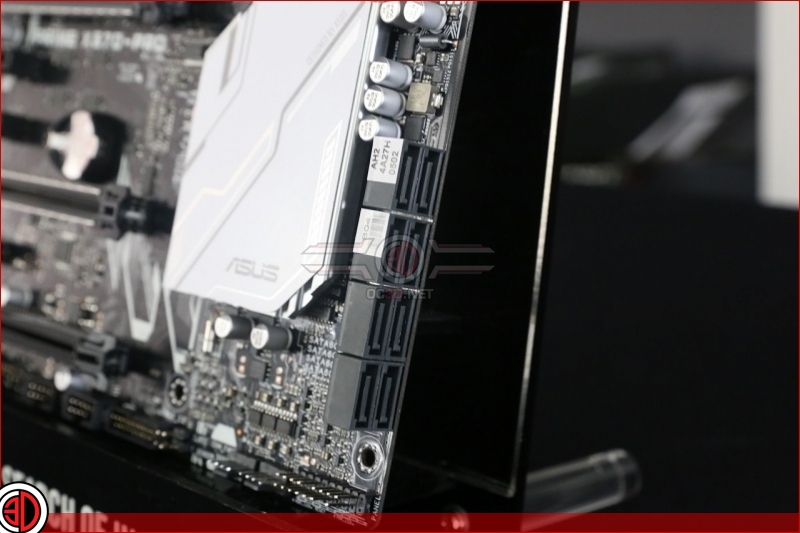 This X370-Prime has two PCIe 3.0 16x lanes, with a single PCIe 2.0 lane (4x speeds), with the first PCIe lane running at 16x speeds and the second lane running at 8x speeds. These two PCIe lanes share bandwidth, so when both are used they run in an 8x,8x configuration, which is the same has how Intel's current gen Z170 and Z270 motherboards operate.

Storage wise this board supports an M.2 storage device and up to eight SATA devices, which should be enough for all but those with the most advanced storage requirements. ASUS have opted not to add support for SATA Express on this motherboard due to the simple lack of SATA Express devices on the market, slating it as a useless feature that no storage manufacturer plans to adopt. 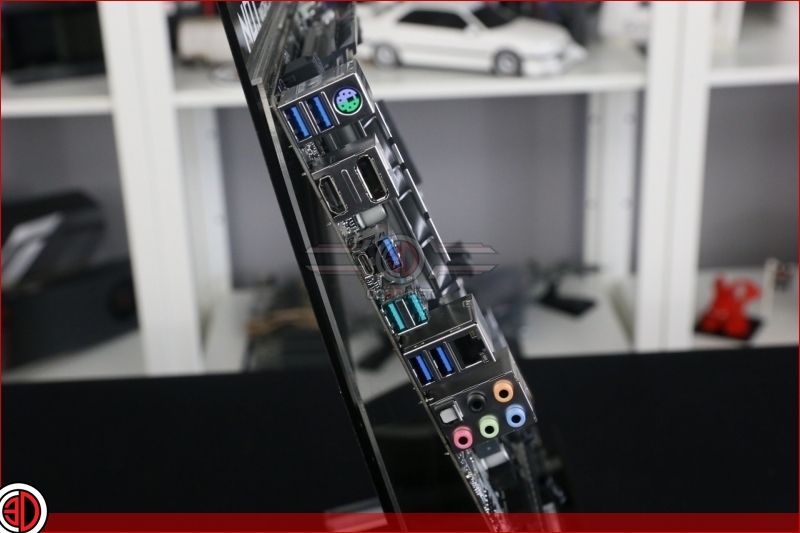 On the rear IO, this board comes with a total of four USB 3.0 ports on the back panel with 4 USB 3.1 ports (three Type-A one Type-C). You can also see that this motherboard comes with an Intel Gigabit LAN port and all of the standard audio connections that you would expect.

The prime also comes with two display connections on the rear IO, with a single HDMI and DisplayPort connection, which should support most modern displays. These outputs are for AMD's future AM4 APUs, which will share the same platform as AMD's new Ryzen series CPUs, allowing users to start small with an APU and have room to upgrade to AMD's flagship 8-core 1800X without changing their motherboard. This offers users unparalleled upgrade room, which is great for consumers.

When we look at the ASUS Prime X370-Pro, what we think of is simplicity and affordability, coming with all of the most important features than a high-end AM4 motherboard requires like a powerful 8+2-phase power design, Crossfire/SLI support, M.2 support and an abundance of SATA connections and fan headers.

The X370-Pro is what we see as the minimum that PC builders should expect from an X370 motherboard, coming with plenty of USB 3.0/3.1 ports, support for fast DDR4 memory and enough SATA connections to satisfy the needs of almost any PC user.

To come at the ultra-affordable price of £154.99 the Prime did need to make sacrifices, though many of these won't affect end users like the lack of U.2 and SATA Express support. Some will see the lack of multiple RGB headers, or the location of the existing RGB header as a downside, though non-RGB fans could also call this a feature.

With the X370-Pro we see what looks like a great baseline for AMD's X370 platform, making it the easy choice for our initial Ryzen CPU testing, which means that you will see our first Ryzen CPU review coming from this very motherboard.

The ASUS Prime X370-Pro is currently available from Overclockers UK for £154.99

You can join the discussion on ASUS' AM4 Prime X370-Pro on the OC3D Forums.

Thelosouvlakia
I end the watching the first video, just as soon as the second pops up, and now a third Ryzes....

The AMD fanboy in me is happy

NeverBackDown
Can't watch since I'm on mobile, but idk if I like this board or not simply because of design. It just makes me feel indifferent towards it. Like the white looks fine as it is sleek but then you get a fat blob of white on the chipset.. just looks odd to meQuote

Greenback
at the price range there's some nicer MB'sQuote

Dragon_Orb
Thanks for the preview, I'll be looking forward to the full TTL style review and the other upcoming x370 reviews to see what Ryzen can bring.

The long term depressed AMD fanboy in me is going proper mental!Quote
Reply