As we said on the BIOS page, the fact ASRock have gone a bit old school in their approach to the Taichi is either fantastic or frustrating depending upon how involved you like to be in the overclocking process. It reminds us of the old DFI Lanparty motherboards in that you had to put an awful lot of time and effort in to achieve the best results. This is undoubtedly not a 'change two settings, reboot, enjoy' motherboard. But naturally if you have put in the time then the rewards are greater. For the Taichi we were somewhat disappointed at the low maximum BCLK, but we needn't have been too disheartened as it achieved the highest DDR4 speed we've yet seen from a Ryzen based motherboard. Our final overclock - in the second screenshot - didn't quite hit the 4.1 GHz we've seen from some other motherboards but wasn't far off. Ally this to the memory speeds and the Taichi should have some fierce performance in its armoury.

It's worth noting all of this was3on version 2.20 of the BIOS.

With everything else low we did manage to get a screengrab of 3580MHz memory, this was no way stable but does show that the board is capable and would probably get something close with a few more bios updates. 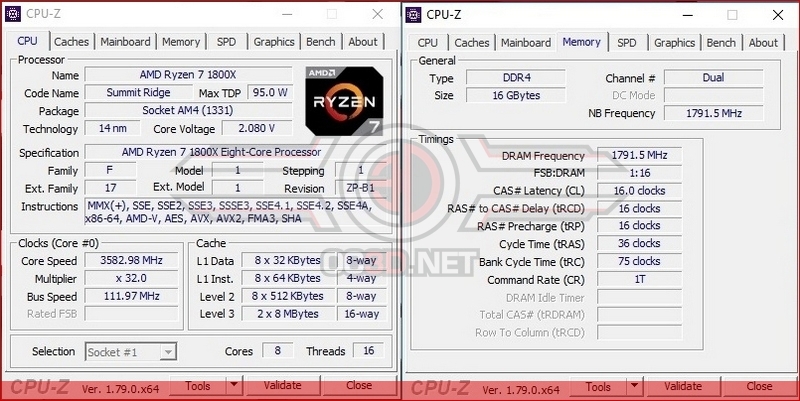 So with 105 BCLK tie in we got 4068.75Mhz as our final clock with 3360Mhz memory, this could be finicky and took some tweaking between benches to keep it all singing the same tune.

Speaker
Since now you've got all the top boards from the major brands I think it would be interesting to do some boot time comparisons. See which board is the fastest.Quote

Excalabur50
Shame after all the effort you took to get it running in the first place that it was mostly underwhelming for you, and really bad they released a board with a bios you can't update, totally boggles the mind really, thanks for your efforts in reviewing it though and considering how many people pestered you for the review I would have expected more comments TBHQuote

Avet
Quote:
Boot time has no value in testing. It is so dependant on component combination, OS junk, etc. It is irrelevant in motherboard benchmarks.

Another great review Tom. You kept it nice and touched all the important aspects. As you pointed out, this board is so good on one end, and so lacking in the other. It got hyped because it's component quality, and price point. But... Bios is a very long way from optimal. Also very hard to navigate. Lack of candy in the box is not that of a problem, because you end up not using half the stuff you get. I would call it adequate.

I think in the end it could be a top contender if they get BIOS to utilize all that sweet hardware. Without that it just gets outshined by competition. Just if they could iron out that UI in BIOS, and get the code right we could have one of the best enthusiast overclocking board. And it would be massive to beat more expensive boards in overclocking.

As with all Ryzen it is not quite there. Competition is still ahead in BIOS. I hope future updates will be fruitful. But until then...

Excellent potential, but if only... that pretty much sums it up.Quote

11:14
First of all I have the Graphics card about 2 days ago. Since then I have been on it. I agree with most of what you said in the video but what disturbs me the most is the fact that there is no tutorial for it. You have to teach yourself to fly a plane. No instructions what so ever. I am a total novice when it comes to overclocking and I watched a load of tutorials of how to do it and luckily i got a video from Brian at techcity - that helped alot. But I have a problem with the M.2 Drive. I bought a Samsung M.2 960 Evo 250 gb. Now the motherboard does not recognize the slot no matter what I did. It just does not see the drive in the UEFI. Is it something like a prayer that I need to do? I looked on Asrocks site and I saw that only the 500 gb Samsung 960 Evo is listed and I am confused... like hell. In the video you say something about overclocking the PCI E lanes for the M.2 to work with the OS installed already on the M.2... that made it even more confusing. any help would be appreciated.
Greetings from Copenhagen. Love your videos and I am amazed of how you can talk for 30 minutes without montage

Avet
You won't find any single overclocking tutorial. I am not aware of it yet. You need to collect info from many sources, and work it out your self, because every CPU is different, and you need to find it's sweet spot.

It is recommended to install OS before you overclock your BCLK. But you would already do that, because you don't have a way to test your overclock.Quote
Reply