ASRock have really upped their game of late, shuffling off the cloak of averageness that somewhat followed them around like a shadow. With the X370 Taichi we saw the dawning of a new day for ASRock that was only slightly tempered by a few issues with the early BIOS releases.

Now ASRock have got the difficult first new product out of the way and ironed out the kinks, it's time to see how the X399 Taichi compares to the other models rapidly appearing on the market.

With a price equal to the MSI X399 Pro Gaming Carbon AC there is tight competition for your money if you're wanting something to squeeze your Threadripper CPU into, but the folks at ASRock have picked up the gauntlet of high performance and rich feature sets and seen about planting themselves firmly in the group of companies at the top of the motherboard chain. Are they successful?

The Taichi is replete with high end features ticking off all the wants and needs of the power user. Eight DIMM slots and four PCI Express 3.0 slots provide the majority of expansion card supports whilst the blend of eight SATA 6Gb/s ports, three M.2 ports and a U.2 connector keep even the most demanding storage-heavy user sated. Particular attention has been paid to the power phase design so let's look at the motherboard itself to go over those. 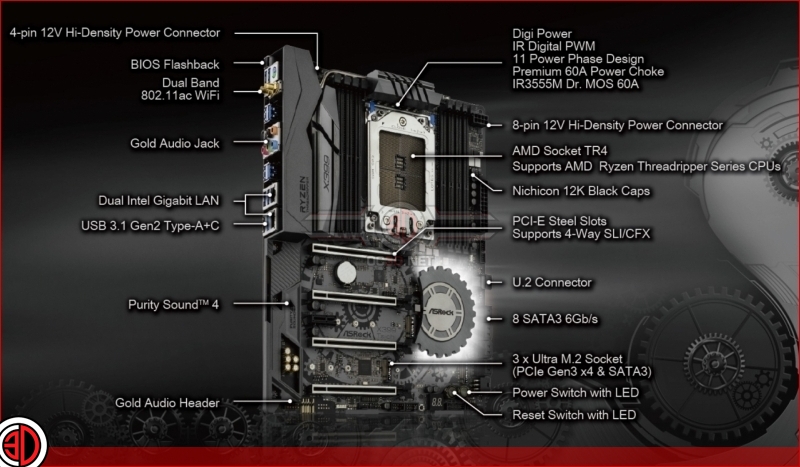 Avet
ASRock is seriously ramping up. I am following their stuff more and more in the recent times. As you have said Tom they could work on the design, but if they are competitive with the price many people that use X299/X399 really don't care how their PC looks. Just price/performance.Quote

Bartacus
I hope Asrock keeps on this track! I'm an Asus fanboy, but I'd love more options. MSI seems to always make rather huge mistakes, so I wouldn't touch them with a 10 ft pole, and Gigabyte is ok I suppose, but not in Asus' league. Options are good!Quote

tinytomlogan
Quote:
They are using the AMD offset voltages so if you want to overclock Id actually say in this rare instance they are not the best. That and the VRM fan is far too annoying.

Everything else about the Asus is epic though and sadly they could fix it all with BIOS - doubt they will because they havnt with normal Ryzen yet :/Quote