NB - 20/04/22 This review has since been updated following the discovery of a flaw that occured during our testing. Such in the nature of pre-release review testing. The games and rendering results have been retested and graphs updated. In the interests of transparency the original results remain, as does the vast majority of our wording. An updated summation will also appear at the top of the conclusion.

If you've been in the hardware world for any length of time then you'll have come across Moore's Law, which states that transistor count will double, or prices halve, roughly every two years. This appears to be a mindset that manufacturers of anything you care to name have taken to heart. Every time a new product gets released the blurb is all focused upon how much more of something there is, or how much faster the something that was already there now is. Or even, rarely, both. If it's neither faster nor more, then it's now more affordable. 'It's the same as that thing you love, but now within the reach of people who haven't got a trust fund'.

When was the last time something was released that didn't attempt to do everything better by just chucking core count or MegaHertz at the problem but instead put all its efforts in to fulfilling a specific niché? Yes, if you are interested in some esoteric enterprise solutions it is possible that some products are all aimed at doing one thing well, but the standalone PhysX cards are the last mainstream release we can think of that had such a singular focus. Yes, we're very old. The newest CPU from AMD, the Ryzen 7 5800X3D, is one such release. It doesn't pretend to be bigger than the current 5800X, it doesn't pretend to be faster than it in every application. Indeed the AMD literature goes to great lengths to explain that it won't make your renderings faster nor improve your encoding speed. This is a processor that doesn't look to build vertically on what has come before but, instead, looks to build sideways. How so?

The early Ryzen processors were a huge change for the fortunes of AMD but, perhaps, had a slight weakness in gaming. The 2nd Generation solved that problem, the third expanded upon it and the current 5000 series of processors are brilliant at all they do. AMD though felt that Intel still had the upper hand in gaming and sought to rectify that issue without necessitating a total redesign of the underlying qualities of their Ryzen processors. To that end they have taken their Zen 3 architecture and bolted some super capable L3 cache literally on top of the die so that the random requests you get when gaming - as opposed to the more "do this for ages" nature of rendering - happen significantly faster. How much faster? AMD claim that in gaming the Ryzen 7 5800X3D will match their Ryzen 9 5900X. A bold claim.

To answer your immediate question first, just because it has extra technology on top of the die doesn't mean that the Ryzen 7 5800X3D is taller than the Empire State building and will require new cooling, because AMD have thinned the die to ensure that current AM4 cooling solutions are instantly compatible.

Enough preamble, let's look through some slides and then check out the performance. Onwards! 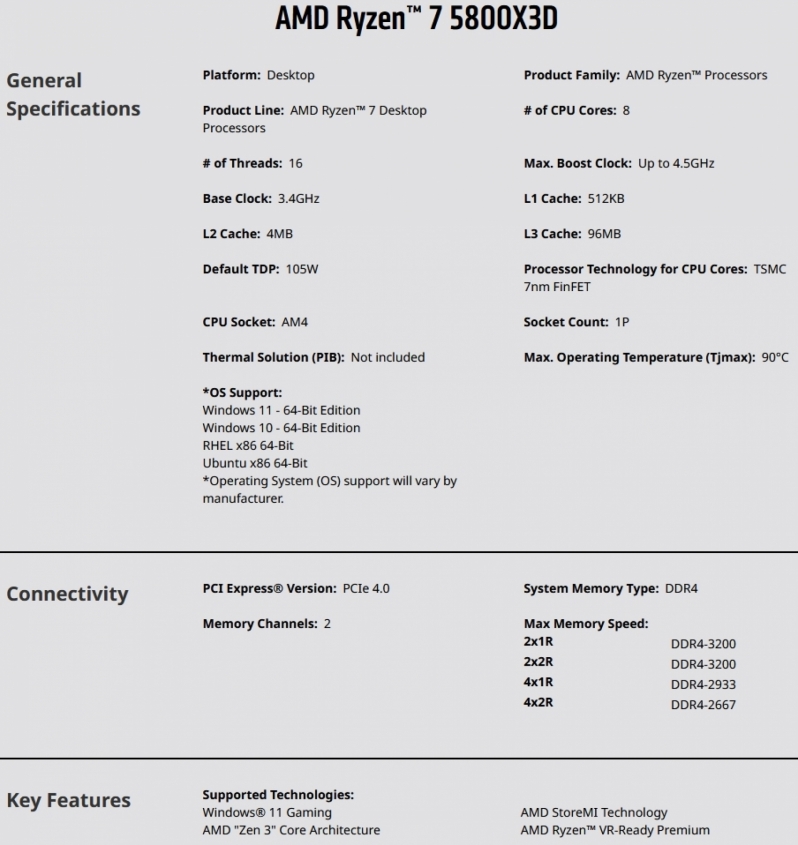 Dawelio
Am I missing something here, maybe they are different things, but in the review it says


Quote:
Interesting that Gamers Nexus pointed out in their review that the Infinity Fabric and memory can still be tuned?...Quote
Reply