Since the launch of the FX8 series of processors AMD have fallen into the sector of the market that is best described by the old "good value for money" adage, which is usually a pejorative way of saying that the performance wasn't all that but they're cheap.

With the release of the Zen architecture, and the Ryzen 7 CPU range, such cliché expressions were consigned to history because they might have been aggressively priced but they had performance out of the wazoo, easily matching up to the Intel models AMD were targeting.

However, despite the Sunnyvale CPUs being much cheaper than their Santa Clara counterparts, we know that the high end Intel CPUs are way beyond most of us, thus the Ryzen 7 CPUs were still reasonably pricey, despite being cheap. Which is where the Ryzen 5 CPUs we are testing today come in. We've got the 1400, the 1500X and the 1600X on hand, and can't wait to discover whether the Quad and Hexcore versions of the Ryzen CPUs are as impressive as their big brothers.

If you only looked for the specifications of the Ryzen 5 on the AMD website you would come away being none the wiser. Apparently they all have performance gaming and lots of processing power, but 66% of the facts are the low TDP - something that is meaningless to the majority of customers - and what cooler it has in the box. The cooler part is equally pointless because there are hitherto undiscovered tribes in the Amazon who know not to use a stock cooler on their CPU. So what we're left with is clock speeds, which generally follow the "the more you pay the faster it is" rule that applies to all of life.

Hardly shouting from the rooftops there, AMD. So for the rest of you, the 1400 and 1500X are quad-core CPUs with threading, whilst the 1600 are six-core with threading. There, that wasn't too complicated now was it. 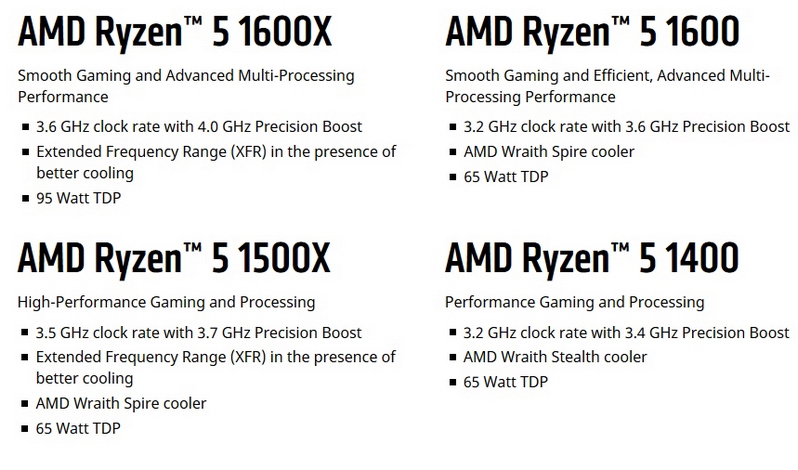 Of course we all want to know how they overclock and perform, so let's get down to brass tacks.

AngryGoldfish
So much to read from everyone all at once. It's gonna be a busy afternoon. Thanks a lot for the hard work as always.Quote

Avet
Great review Tom. So many angles on this one. Keep on the good work.

I am building new system for a friend, and i am undecided between Intel, or AMD which is the good thing. Last year it was go with intel... No brainer.

1500X could be the next AMD best seller.Quote

Thanks for the review/s. Only site I've found so far with all of the 5 range.

Greenback
I feel sorry for tom even though in the video he says if you play games that need frequency then go Intel otherwise the 1500x is great for gaming he is still a biased AMD fanboy going by FB comments because Intel was better by 5 fps in other games.

Thanks for the review Tom you gave all the info needed and I had a big enough coffee cup to watch it all in 1 sitting. They just need some better looking B350 motherboardsQuote

AlienALX
Quote:
MSI have a couple coming. Tomahawk and Grenade or something stupid.

TBH if you only do gaming on a PC and nothing else then I guess it's worth buying Intel. Anything else? AMD have it covered