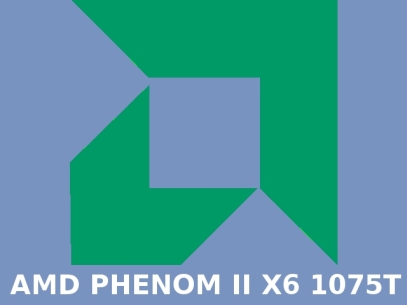 Quite predictably, yes the new 1075T is slower than its 200MHz more frequent sibling but barely by much if our results are anything to go by. Not only is the 1075T as much as £30 more affordable than the flagship 1090T, it also overclocks similarly and is no less/more of a power hog.

Really, the sole pitfall of the 1075T is the lack of an unlocked CPU Multiplier range. However, its multiplier of 15x means that motherboards are less likely to hold this particular processor back. On the basis that most Phenom II's overclock sweetspot is around the 4.00GHz mark, you would hope to be able to heighten its base HTT from its nominal 200MHz to the region of 270MHz. A large number of motherboards can achieve this with ease, but as always there is a risk that it will not. That would be disastrous...

Let's just assert for now that the 1075T is the pick of the bunch. Is AMD a worthy route to follow in favour of a similarly priced Core i5/i7 system?

At around £185, the new 1075T sits just £30 above the recently reviewed Core i5 760 processor and £20-30 cheaper than the hyperthreading enabled Core i7 950. On the basis that both this processor and the 1090T perform in a similar ball park to the Core i7 930/950 and boasts lower platform costs than the mighty X58, then yes the Socket AM3 platform continues to represent great value for money. Of course, this argument is more or less void if you were to go out and drop upwards of £175 on an ultra high end 890FX motherboard.

Ultimately ones ideal processor will depend heavily on the programs they use. So long as you use a variety of heavily multithreaded programs, then the Phenom II X6 can hold its own against much of the Core i7 range with relative ease. However, nothing escapes the sad fact that its K10 architecture has a fair performance deficit (clock per clock) when compared to the Core i7 range and thus will fall behind in less multithreaded applications.

We believe the 1075T offers great performance at a competitive price point. The processor's locked multipliers mean that it is more likely to attract those who don't intend on heavy overclocking, but we have already determined that with the right motherboard it will see frequencies just as high as the 1090T.

All in all, a solid product. Great performance, great price, but if you want to guarantee a large overclock, then you will need to either invest in a trusted motherboard or perhaps the 1090T Black Edition instead.

Thanks to AMD for sending us the 1075T today, you can discuss our thoughts in the forums.