Introduction
AMD have been playing catch-up with Intel ever since Intel's Core architecture reared it's not so ugly head. With the X2 range of processors lagging behind their Core2 counterparts and Intel releasing a Quad Core, AMD had to get a chip out and fast.
Unfortunately, they didn't manage fast, but they did manage to get one out. Phenom is a native Quad Core chip which is fantastic, but it's launch was marred by reactively low clock-speeds. The Phenom 9600 we have here today kicks us off at 2.3GHz and there is a 2.4GHz Phenom 9700, a 2.6GHz par - Phenom 9900 as well as a 2.22GHz Phenom 9300. 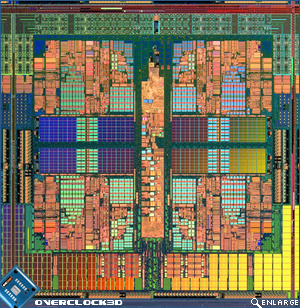 What's new?
Well the thing is, not a whole lot is actually new with the new CPU. AMD "enthusiasts" will point out the fact that pipeline can cope with about 33% more traffic and that some of the SSE4 (AMD call it the SSE4a), instruction set is now able to be handled by Phenom.
AMD have gone with a three tiered cache level for their Phnom processors with the L3 being labelled "Smartcache", with 512K per core adding up to a total of 2MB L3 cache. This would be hunky-dory, except for the fact that (in very extreme circumstances), there is a bug called the L3 cache Translation Lookup Buffer (TLB) erratum which can cause a system crash. There's a BIOS fix for this, but this means a 10-15% performance drop. Seeing as we didn't use the BIOS fix in this review and during use of the CPU and never once experienced the error I think your fairly safe not worrying about it....unless you need 100% total stability all of the time.
AMD have also pumped up their HyperTransport bus to 2.0GHz from 1.0GHz seen in their previous CPU's.
Some pretty cool new virtualisation features have also been added, which we went through in our Barcelona Article.
Pretty in...Black...
The Phenom AMD supplied us with was the "Black Edition" 9600 with an unlocked multiplier. By all accounts it's a good thing too as rumours are circulating that Phenom's don't overclock too well. 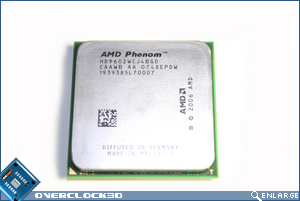 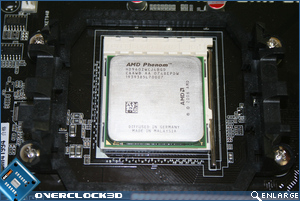 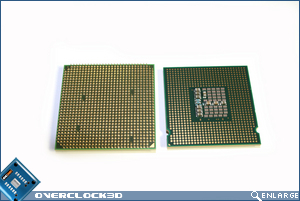 I think really what you all want to know is: how does Phenom get on in our testing?
Features
Some official specs: 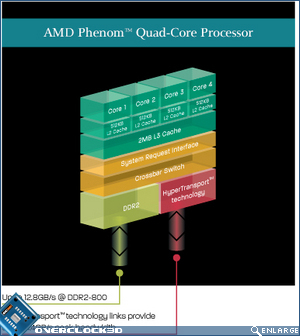 * True quad-core designed from the ground up for better communication between cores.
o BENEFIT : Cores can communicate on die rather than on package for better performance

* Shared L3 cache
* In addition to the 512K L2 cache per core, up to 2MB of L3 cache shared by up to 4 cores.
o BENEFIT : Shortened access times to highly accessed data for better performance.

* Silicon feature-set enhancements designed to improve the performance, reliability, and security of existing and future virtualization environments by allowing virtualized applications with direct and rapid access to their allocated memory.
o BENEFIT : Helps virtualization software to run more securely and efficiently enabling a better experience when dealing with virtual systems

* Reduces processor energy consumption by turning off unused parts of the processor. For example, the memory controller can turn off the write logic when reading from memory, helping reduce system power.
* Works automatically without the need for drivers or BIOS enablement.
* Power can be switched on or off within a single clock cycle, saving energy without comprimised performance.
o BENEFIT: Helps users get more efficient performance by dynamically activating or turning off parts of the processor.

Bungral
Not a chance I'd buy one.

I used to be quite loyal to AMD but that was Athlon XP days.. It came to building a new rig and very nearly bought a X2 6000 but just couldn't ignore the gains I'd get from switching.

Point is until AMD drastically improve they aren't gonna get anyone building a new rig jumping over to them or even sticking with them.

Good review as ever Matt

Oh yeah and I agree it should have been run without the fix if 2 days of testing gave you nothing to actually fix.Quote

1 slight point though: "socket AM2 users"---shouldnt that be am2+ users

somehow this makes me think that AMD are rushing things so they dont fall too far behind intel.the interesting fact is that the phenom is not far behind the q6600 in the benchies(well at stock,anyway),so maybe amd are heading in the right direction after all,roll on the AMD 8 core(as per your news post the other day)maybe they are not as far behind as we all thought?Quote

Hatman
They have the revised ones out soon though and then 45nm ones later this year.

Aslong as they keep on track anyway. A big advantage for AMD would be to release 8core cpus on their AM2+ socket, as for intel you would have to buy a new mobo for nehalem.Quote

PV5150
Quote:
I don't think the B3 revision will offer anything special performance-wise, but it may allow for a lower TDP (hopefully) and a fix for the TLB issue. In my opinion AMD won't be able to squeeze that much out of the Phenom architecture in the bid to reduce the performance deficit by means of the new revision. Nahalem will mean a socket change because the memory controller will now reside on-die. It'll be interesting to see how much of a difference that makes in memory bandwidth next time around.

Good review Kemp, but unfortunately AMD doesn't have the goods this time to warrant a purchase. Hopefully the new 45nm procs will provide a much closer performing alternative.Quote

PV5150
Quote:
I don't think the B3 revision will offer anything special performance-wise, but it may allow for a lower TDP (hopefully) and a fix for the TLB issue. AMD won't be able to sqeeze that much performance out of it's current deficit by means of the new revision. Nahalem will mean a socket change because the memory controller will now reside on-die. It'll be interesting to see how much of a difference that makes in memory bandwidth next time around.

Good review Kemp, but unfortunately AMD doesn't have the goods this time to warrant a purchase. Hopefully the new 45nm procs will provide a much closer performing alternative.Quote
Reply