Introduction
In June of this year, AMD launched it's budget/mainstream line of processors named Athlon II. Asleep already? If so, I urge you to try and tune in once more as it is a rather important product family. As the name may suggest, no it certainly won't set the world on fire with it's performance but who would it expect it to do so? The main criteria of a successful mainstream processor is to offer a very high level of performance given it's retail price. Whether you're someone who is looking to buy a budget system prebuilt from a high street retailer or whether you're a DIY Systems Builder who simply has to build to a budget, these releases are very important indeed. This combined with AMD's typically lower ownership costs as well as the decline of DDR3 pricing could make for some rather interesting results. Let's take a closer look at the Athlon II X2 250 processor
The AMD Athlon II X2 250, is currently the fastest processor of it's product family. As you may have observed, the Athlon II sports a new core. While it has many similarities with the AMD Phenom II "Deneb" core, it has absolutely no Level 3 cache but instead has two dedicated banks of 1024kB Level 2 cache, an increase from the 512kB per core found on Phenom II. While the loss of so much Level 3 cache would surely hamper the processor's performance in certain applications, the increase in Level 2 cache does compensate somewhat. The main advantage of this arrangement means that the size of the core has decreased, making it cheaper to produce and also allows the processor to sit in the lower 65W TDP envelope. The only other advantage is from AMD's point of view, in that they don't have to speed bin and cripple perfectly good Deneb Quad Cores in order to meet a quota of lower end stock. Speaking of price, this 3.00GHz unit weighs in at just £55. On paper, this sounds like a fairly reasonable proposition but with this comes our testing theory...
It's all well and good that this processor is designed to be a somewhat no frills, cheap and cheerful unit compared to it's more powerful siblings. But how close does this processor get to popular, proven but more expensive units such as...let's say the Core 2 Duo E8400? This could be argued as a rather unfair test and I'm sure that some of you might well be raising an eyebrow about now. Nothing is impossible however and even though this particular processor may resemble an AMD Athlon 64 X2 processor due to it's lack of Level 3 Cache, one would be tempted to say that it'd be a rather interesting battle. Interesting it shall be and on that bomb shell I shall say no more until our testbeds are spooled up and ready to go!
Overclocking
Overclocking the AMD Athlon II is not particularly difficult but there is more to think about when compared to the equivalent Core 2 Duo setup. Overclocking a Core 2 Duo would usually involve reducing the initial memory speed and simply ramping up the Front Side Bus speed until it can't take anymore, at which point you may consider voltage increases to push further. On the AMD Phenom II platform, we have a Hypertransport Base Frequency, which acts as the variable that you raise to overclock. Then we have a multiplier that derives the overall Hypertransport Link Speed, which you may need to regulate in order to reach a higher clock speed. Then finally, we also have a multiplier that derives a Northbridge Frequency, something that you want as high as possible to get the most out of your processor. Unlike AMD's "Black Edition" CPU's, standard processors such as the Athlon II have CPU Multipliers (the multiplier that derives the overall core frequencies) that are only unlocked downwards but not upwards. The implication of this is that there is a larger dependence on the motherboard to reach a higher Hypertransport Base Frequency.
Our particular AMD Athlon II had a default core voltage of 1.3500V. AMD K10's are particularly fond of lower temperatures and thanks to a simpler core (relative to the Phenom II) low temperatures were indeed what we were gifted with. 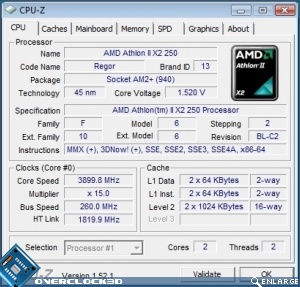 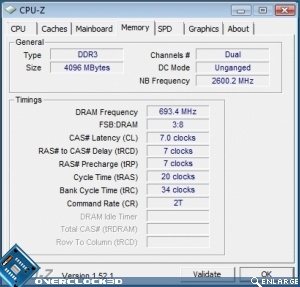 tinytomlogan
Much cheaper than the 8400 but still just pipped to the post in benches. Makes me wonder if its FSB related though. Nice clock for a cheap chip though

I think this Athlon is very good value for the weight it's punching at.Quote

Its a CPU like this that I think I'll put in that new Linux box for the parents.Quote

Mul.
Quote:
You are indeed onto something there. While higher HTT Base Clocks or even the HTT Link Speed has little bearing on performance unless ran well under 1.0GHz, high Northbridge Frequencies, such as an increase from 2.0GHz to 2.60GHz makes a notable difference. Perhaps some official testing with regards to Northbridge Frequency would be an interesting read?

Diablo
For the price of a pentium 5200, I would be tempted to use one of these, especially if I was building a budget machine for a (non-overclocking) relative. It looks like a pretty good punch for its price, even if it is beaten by the 8400.Quote
Reply