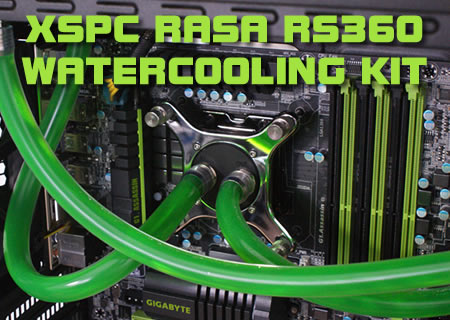 Water cooling kits.... they were once a much avoided option by most in the favour of a custom loop. Times and technologies have moved on and the XSPC kit on test today is worlds away from what was once the easily available "Big Water" tacky kits that flooded eBay just a few years ago. The thing is, technology had moved on everywhere, now we have air cooling heat sinks that easily out-perform water cooling kits from a few years back.

So when speaking to the guys at Specialtech recently and hearing that you can get a 360mm radiator based kit for £139.99 we thought it was about time for us to take a fresh look at what water cooling has to offer. Being compared to the class leading heat sink of today the NH-D14 the bar has been set very high.

The only thing you would need on top of this kit is to choose the coolant you wish to use. This is just to give you the option to pick the exact brand and colour fluid you'd like to use in your loop. Anyways enough chit chat lets move straight on to the important bit..... temperature results.

The third test is complicated so I'll try to explain. The Noctua results are 200x22 @ 1.45v and it's the only heat sink to have ever passed this since we started testing in our new format. The water cooling loop was in fact run at 215x21 @ 1.465v which was the maximum clock we achieved on the G1. So even though the water cooling was much cooler it was in fact still at a disadvantage of being run with a higher Vcore and CPU clock. The only factor stopping us pushing further is actually the CPU itself!

Seems quite conclusive to me, the graphs really do speak for themselves. Let's get the slightly negative parts out of the way first. First of all the price if we say £150 by the time you have bought your coolant that is more than twice the price of the D14. We should also mention that many will doubt their own abilities to fit the kit themselves as it requires more time and effort than just fitting a normal heat sink.

Now the positives, of which in my eyes there are many. Starting with the obvious temperature across all tests were a minimum of 8°c delta lower than the best air heatsinks we have tested to date. This margin only widened the higher the clocks and the volts were pushed, as the air coolers were on their limits the water cooling was still giving delta temps below 50c!

So the temps are amazing, we did run our tests with the fans at 12v making it much louder than the air coolers. However, dropping the fans back to 9v the noise dropped right back as well with only a marginal increase in temps. It would be well worth thinking about a fan speed controller or some resistor cables to slow the fans down should you think about purchasing this.

Next we move on to something I personally think is water coolings ace card - customising. There are so many things you can add or change on these kits apart from the obvious coolant colour to make it your own and add that extra special angle to your new rig build, or for that matter sprucing up an old one. You just can't get away from the fact a rig with a well built water cooling loop will always demand more respect on forums and at LAN's than someone that has just taken the easy option and fitted a heat sink, no matter how well it performs!

So the final paragraph, yes you're right it's not cheap but water should never be. If it's not done right it will be worse than air cooling, so if you are not willing to spend that bit extra you already know what you should be buying. For those with the confidence to fit it and the wallet to take the hit then you'll end up with cooler temps no matter what overclock you plan on pushing too, a better looking rig for all the forum hardware licker's and the most important thing the fact you can sit back after it all and say "I built that".

If I was to compare this to air now it would get silver because of the price, but looking at other water cooling kits that have similar specs its an absolute bargain. So as far as water cooling kits go this deserves nothing less than the coveted OC3D gold award.

We would like to thank Specialtech for sending the kit in for review, you can discuss any questions you have in our forums.

What fan speed did u use for tests?Quote

sources95
Tom how would you compare this to a a fully aftermarket setup?Quote

Junglerog
That is quite awsome. I've been asking a while back about a 240 rad (thickness to be exact) on the forum not succesfuly and here is my answer. Thin rad can perform quite well, well enough for my needs for sure. I have checked specialtech website and they also have a 240 rad set. I will most deifnately be getting it for my tiny case built. Thanks!Quote

tinytomlogan
Quote:
I say in the video quite a bit and explain why - 12v.


Quote:
Slightly loose in the question there dude, ie thats like asking how good is a stick or ram compaired to this one.

Loops will perform differently compaired to the parts inside wont they

This kit blatantly keeps the temps low, bigger/thicker rads will allow larger overheads for GPU's, and better pumps will allow a higher head for more restrictive or just more blocks. Its not rocket science to work it out tbh.Quote
Reply