Introduction
In the air cooler market today, there is a vast amount of competition. For a specific product to stand out amongst the crowd, they either need outstanding performance or to bring something new to the table. The latter seems to be the objective of Titan's monstrous heatsink, the Amanda.
What makes this heatsink different from the others? Well, Titan seem to believe that numerous heatpipes, twin fans and a huge array of fins, as most other high-end sinks have, aren't enough. So they decided to strap a Thermo-Electric Cooler (commonly known as a TEC) to the bottom of the unit so that it's got that little extra kick. Here we have a few of the promotional images from the Titan homepage. 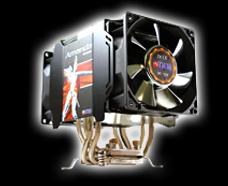 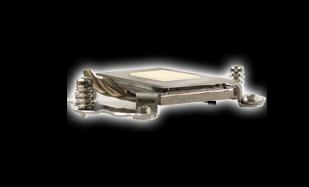 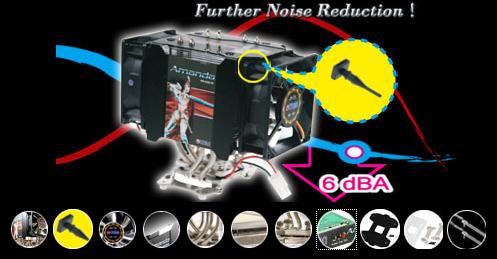 The Amanda boasts low temperatures at even lower noise levels. So without further ado, on with the review.
Packaging
The Amanda arrived in a surprisingly large cube-shaped box, decorated up to advertise the product it contained.  It sports a little window on the front so that you can catch a glimpse of the cooler inside and a plastic handle on the top. While this is such a simple thing, I felt it was a nice touch. 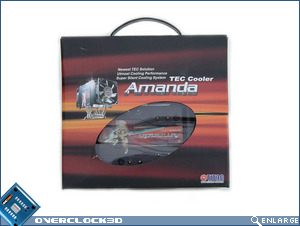 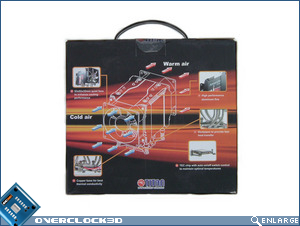 The left and right sides of the box were riddled with info about the product, with one side being a features list in several languages plus a few graphs showing its 'thermal resistance' levels and the other listing the specifications of the cooler plus the masses of awards it has been given. 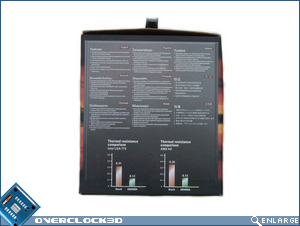 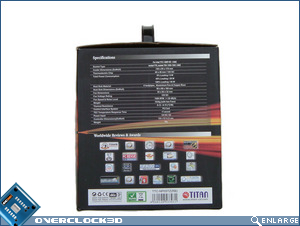 Upon opening the box, you are presented with a smaller box sitting safely, along with the cooler, inside a moulded plastic carrier that did a fantastic job of protecting the contents. The Amanda should be well-protected from the roughest of couriers. 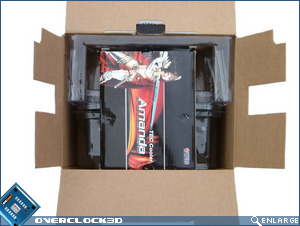 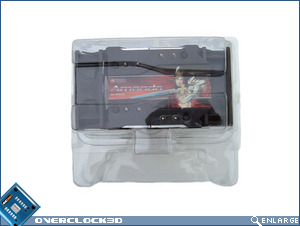 Package
As you saw, the Amanda's extras came all stuffed inside a little box. This TARDIS-like box contained a lot more than I expected and, once taken out, I had no idea how Titan managed to fit it all into the space it occupied.  The package consisted of: 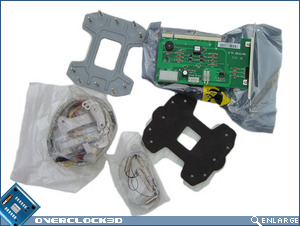 There are a few interesting things bundled with the cooler. The first thing that struck me was the inclusion of a PCI card. Although it was apparent that the card was needed, there was no real explanation for it. It has 3 status LEDs on the back that inform the user about the status of the TEC and temperature of the base. However, this card came with no drivers whatsoever and didn't need any to operate.
The next inclusion that was a little different was what Titan called a 'Weight Reduction System'. This basically consisted of a few pull cords with which you strapped one end to the fans and the other to a vacant hole in the case, taking the weight of the fans off of the rubber brackets holding them on.
All in all, there is a decent package combined with the Amanda: a lot more that comes with the average cooler at least.
On the next page we will take a look at the cooler itself...
«Prev 1 2 3 4 5 Next»

Mullet
Nice review - that is one beefy cooler....Quote

TonyG
Good review, but to me looks abit top heavyQuote

Rastalovich
Good read, but I`m not impressed with the TEC at this point.

Price vS established air coolers, I don`t think it`s "good-enough" for something that is riding on the back of being more-special than just an air cooler.