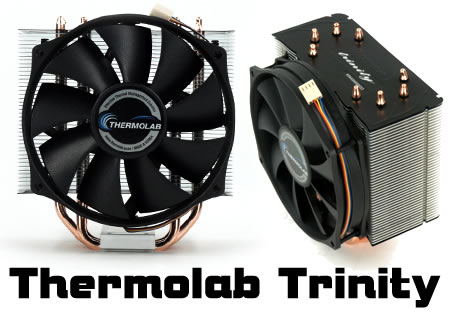 EDIT 04/03/2011 When this review was first published one of our main concerns was the Trinity's pricing, £5 either way would have swung our views quite considerably about the coolers value. We have finally received some news on the coolers UK pricing though thanks to the guys at www.quietpc.com - go down to the conclusion for more information.

This one is easy but hard... Yeah great start Tom. This is my first time testing any of ThermoLab's products both professionally or back in the days of me wearing 'L' plates. The difficult part arises when the information about ThermoLab as a company is very limited on their own website. All I can really tell you is they have released several CPU coolers over the years and the Trinity is the latest and is aimed at a compact, quiet, yet well performing cooler with a custom designed 130mm fan.

We were sent the Trinity as an early sample from the guys over at Quiet PC because they wanted it to be put through the OC3D heat sink torture testing! I know you really don't give a monkeys anyways so lets just move on to the specifications! 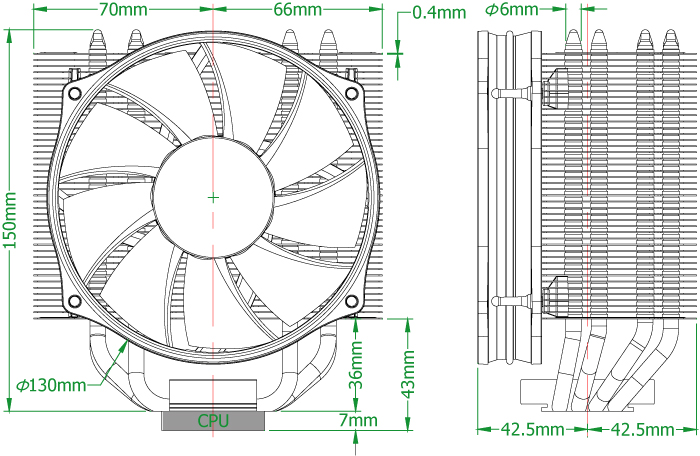 We would normally at this point test at 4.2GHz but within minutes of starting the tests even with the fan on 12v the temperature on two cores had exceeded 90c so I decided to abort the test as we had obviously reached the limits of the cooler.

The Trinity is a surprisingly small cooler and shouldn't cause any ram, motherboard, heatsink or case issues on pretty much anything that has a 120mm exhaust fan. Considering its size it performs very well. Normally at this point I would harp on about the fact that due to its small size it needed an industrial leaf blower to keep the temperatures down. I did say normally because not this time. Even with its compact size and quiet fan it still managed to perform very well in our 4GHz testing. 4.2GHz @ 1.35v was a step to far for this cooler sadly so its definitely not designed for serious overclockers.

At the time of testing we had no official idea on price, but comparing it to other Thermolab coolers available at Quiet PC we would hope that it comes in around £35 to £40. Saying that if this did come in at £34.99 when QPC do finally get stock this would be an absolute cracker, for a stock or reasonably (1.25v max) clocked 1366 system or because of the lower heat output on 1155 chips we would bet that this would probably keep any sandy system up to 1.4v perfectly happy and in the low 70c's at very worst.

The long and short of it is if the price is right, for its size and how quiet it is this would come with a heavy OC3D Silver Award endorsement with the only draw back being the mounting which if it was better would have meant it got an easy gold. Its really down to how the price looks when Quiet PC finally get stock.

Edit 04/05/2011 - I have just heard from QuietPC about the price for this cooler, but let me recap some of the points I mentioned above originally. We were hoping for a £35 to £40 RRP, with a rough price of £34.99 we said it would be a solid Silver award. The good news is the cooler is now available in the UK for an amazing £29.99! Because of the mount I cant let this slip through with a gold award, but its definatelly getting a 10/10 for price so we have decided to give it the VFM award aswell.

Its also worth noting that the boys at QuietPC could have easily just listed this at £34.99 and they still would have got their silver award, the fact they drove the price down even further really does deserve a tip of the cap in respect.

Thanks to Quiet PC for the sample on test today, you can discuss the results in our forums.

SieB
This cooler looks like it could be king of the mid range coolers especially if it does end up going up for sale at £35. For anyone looking to do a bit of overclocking for normal use and a bit of gaming this would be perfect.

UkGouki
its a good looking little cooler but i think would do a hell of a lot better with push pull fans..Quote

in a middle of the road sort of way

again, middle of the road

if priced in the middle of the road, looks set to be goodQuote

Arthur Hucksake
Could push out the Frio and such. That thing was noooooisy.Quote

tinytomlogan
Thing is this performs well but is quiet and yet its still small.....Quote
Reply