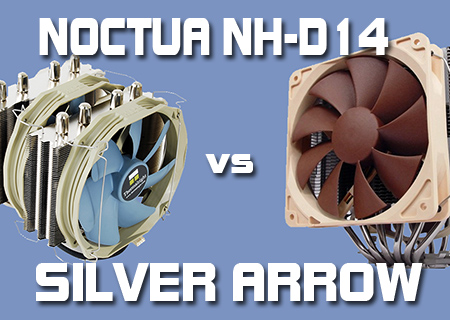 Thermalright pretty much rewrote the blue-print on what a CPU Cooler should be when they released the TRUE 120. This was a monster tower cooler that quickly became the cooler of choice for the Intel socket 775 processors.

With the release of the Core i7 series though a new solution was required to tame the heat that these put out, and eventually it settled upon Noctua, with the NH-D14, to stand atop the mountain and take over the number one slot. Many companies have tried to knock it off its perch without success.

Thermalright have re-entered the battle with the immense Silver Arrow, a cooler than follows the Noctua trend of twin towers and twin fans. Can it really take over the premium position?

We're here to find out in the battle of the Heavyweight champions. Please put on your best Michael Buffer...

In the Blue corner weighing in at 825g, hailing from Taiwan, the challenger, the Thermalright Silver Arrow.

In the, erm, Brown corner weighing 1070g with fans, the Austrian Powerhouse, the Champion of the World Noctua NH-D14.

Of course we're all familiar with the Noctua NH-D14 as it's been our reigning Best In Class for some time now. If you're unfamiliar with it then you can catch up by clicking here. As for the Thermalright Silver Arrow, let's take a look at what the Challenger is bringing to the party.

And I think that's why it fails. With the Noctua as you crank and crank the temps just don't seem to change. My 940 didn't refuse to boot due to heat I was just scared of blowing it up.

I might have missed the actual price of this but if it's around £50 why are they charging the same for that stupid shaman GPU cooler? This thing has two fans on and is bigger.

Nothing to worry about there for Noctua then. It'll be a bloody long time before any one can beat the NH and by the time they do it'll be too late.

Was talking to Stepy about this last night. The Noctua was just pure American right from the start. I could just visualise two yanks (Cleetus and Bubba) saying "Holy sheep sh*t, let's make the biggest dog garn cooler we can fit on a motherboard !" and then speccing it out like a V12 Aston. Once you reach that level all others can merely copy you, but with little chance of beating you. I mean, how the hell do you make a bigger cooler than the NH?

I wouldn't mind but TR seem to have simply stolen the NH and made a poorer cooler. I mean look at them

I do like the look of the fans on the TR tho, would look cool on a Gigabyte

Noctua threw the first punch. So it was game over. It really was hard to appreciate just how enormous the NH was until I had one in my PC.Quote

Todd
I don't like the look of the silver arrow :/ It's too damn angular for me to like it.Quote

Delusion77
I actually thought the noctua was going to loose this one. but i guess another1 bite the dust!Quote

SiLo
What case is that? it looks badassQuote

And I now hate Tom more than ever

You did that on purpose didn't you?Quote
Reply