Keeping in mind that the Silver Arrow ITX is not intended to compete with the likes of the D-15 or D15 we think it makes a reasonable fist of this entry level test.  We of course run all tests at the full 12 volts, which for the ITX translates to a very quiet 24.9dB(A).

At the higher levels of heat generated by the increase in voltage required for the 4.0GHz overclock, fan performance, although still a factor becomes less critical, replaced instead by a coolers ability to conduct the heat up the heat pipes and more crucially the total surface area of the fins enabling convection to the atmosphere.  In the case of AIOs and water cooling the surface area of the radiator and the efficiency of the contact plate begin to play more of a role.

The ITX has slipped down the charts a bit, most noticeably giving up some places to the brace of bequiet coolers.  bequiet by name and by nature, but we'd have to say not nearly as quiet as the Silver Arrow.

The Silver Arrow isn't quite bottom of the pile, but it's not far off.  But again let's remind ourselves that this cooler has a single 140mm fan, is very quiet and won't cause you any RAM encroachment issues.  The same can't be said for the coolers above it in the charts. 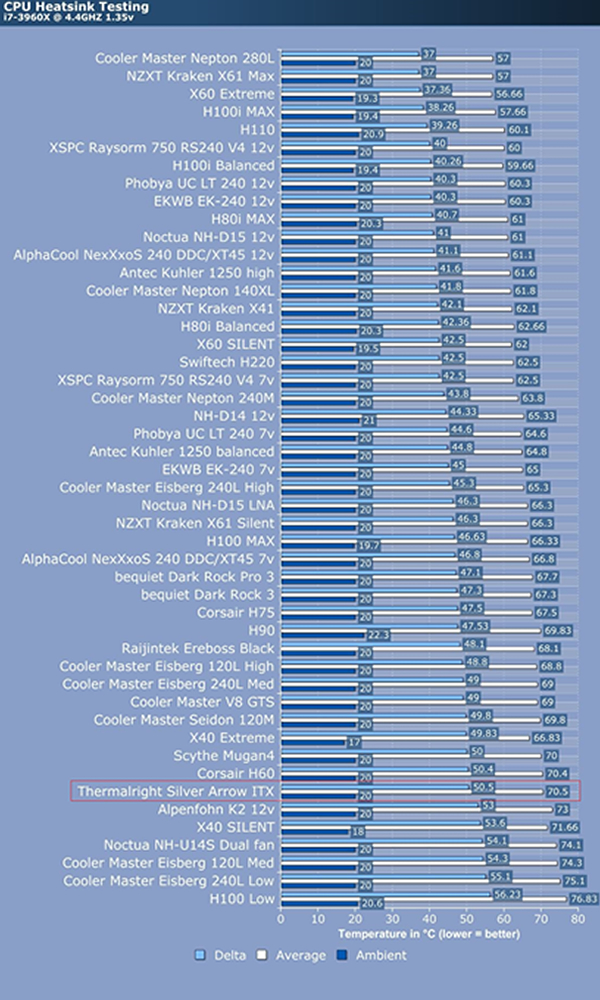