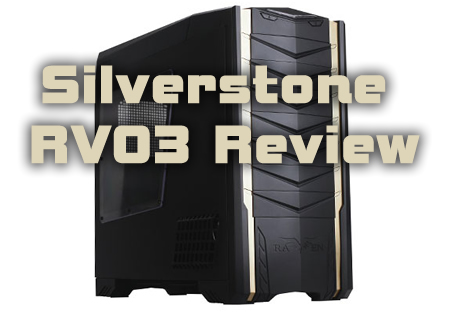 Recently Silverstone have been on a roll with the staff here at OC3D, there's not really been a chassis they have produced we haven't liked. Even the quirky FT03 went down well with all of us, we did however worry that the RV03 may have been a step too far towards the wacky. So it's with bated breath that we have the Raven RV03 in for a full strip down build up review to see if all the new design ideas work or wane. So in an effort not to give too much away before the video review and conclusion let's head straight into the specifications.

When I first heard that Silverstone were to release a Raven with the window on the correct side my initial reaction was 'finally, that's going to be awesome!'. Then the details emerged that they had put the PSU in the front and the hard drives behind the back panel I became slightly concerned that had taken the design that step too far and ended up with a novelty case like the Tt Level 10 that's utterly pointless.
So the question you are all thinking is did it sink or swim? Well after an epic journey across the channel covered in Vaseline the RV03 emerged as an incredibly good swimmer. Infact if it had taken part in Dunkirk it would have been one of the vessels that safely returned with a hoard of rescued soldiers. A slightly weird analogy but think about it.

So let's start at the front with the PSU. It does seem very strange but that's because we are all so used to having them at the back. If you look at it objectively the intake is dust filtered, the exhaust is free flowing straight outside, cable routing options are great and with a bit of imagination could even tame a non-modular PSU. The extra fan options on the optical bays are yet again another quirky addition. I did wonder at first where the air was meant to come from and was very impressed with the optical bay cover design which allows some airflow in and is still dust filtered. This is never going to be the most free flowing part of the case by any means but the option is there should you wish to use it. I however probably wouldn't bother, I didn't in the testing at all and never felt the need to add any extra noise to the case just for the minimal airflow it would deliver.

Airflow with the two 180mm fans in the bottom that are yet again dust filtered is as you would expect with the Raven / Fortress family, I said that the RV02 was one of if not the best air cooled chassis on the market - the RV03 is no different. Excitement was raised when I noticed the 120mm fan options in the base were perfect for a water cooling radiator but due to their placement these just not the room there to squeeze one in. Silverstone could have easily designed this in without an issue though so maybe this could be something they bring out in a later revision or with the next style case as there is definitely room in the bottom for a 360mm rad and the smaller your graphics card is the thicker the radiator you will be able to use. This could be the first of the RV's or FT's that actually could be a viable case to modify for water. Hey if I think it can be done and built in a way that would be tidy that has to say something....... Right?

I was initially worried about hard drive temperatures but I can happily report I have tested other cases even with direct fan cooling that have performed worse than this. The drives are slightly warmer than the RV02 but not to an extent that needs to raise any concern. The hard drives are actually easier to work with than a normal case in some respects as you only need to remove one of the side panels not both to work on them. Another bonus is any unused hard drive bays will be perfect ways to keep the cables tidy on the back of the case.

First of all a tip of the cap for yet again trying something different, with a brand that was lets face it working very well as it was. The FT03 was an innovative design and the RV03 although very different followed in its wacky footsteps. Wacky as those footsteps may have been they have won 2 awards, wacky got them the OC3D Innovation Award, for the performance, build quality and the shocking good price of just £114 that is easily a winner of the OC3D Gold Award.

Thanks to Silverstone for the RV03 on test today, you can discuss your thoughts in our forums.

SieB
I like this case and at £114 it's a bargain, I think the RV02 does look better though just a shame it's the wrong way around.Quote

Taurus
Nice review as always, I wish the case manufacturers would spend a few pounds more on the window and have it recessed or even on the inside to make it look better.Quote

cerbrus2
Cant recomend this case enough. I was unsure about it initially. But I absolutly LOVE IT.

And yeah the top light glows red in the centre to act as the HDD led.

Also you get a large double side sticky pad with the case. So if you DO run a optical drive. you can stick the front panels to the drive tray. So the front of the case is not ruined by a optical drive.Quote
Reply