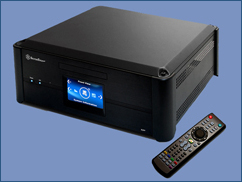 Home Theatre PC's were going to be the next big thing a few years ago, if Microsoft were to be believed. When they released XP Media Centre Edition, a new breed of PC's appeared, which aimed to bring the PC into the lounge, and to unify the whole PC / home media experience from one central PC. Sales of these systems were very slow, partly due to the initially high prices, and partly because the consumer was slow to pick up on the new technology.
With the growth of home built PC's, the HTPC has seen a resurgance in popularity amongst enthusiasts. Also responsible was the falling prices in the required hardware. Most major PC case manufacturers offer some HTPC cases within their product range. Some are no more than a reduced sized enclosure, whilst others offer true HTPC friendly features. Today we are reviewing Silverstone's latest offering, the Grandia GD02-MT,  and we aim to see which catagory it falls into. But first, a little information on Silverstone.
About Silverstone
Silverstone Technology Ltd. was founded in 2003, and since then have consistantly brought to market attractive PC cases, both in terms of design, functionality and aesthetics. They have also generated some innovative solutions and gained a respectable reputation amongst PC enthusiasts. The SilverStone Technology’s philosophy is based on their recognition that merely having innovative expertise within the industry is not enough. Their objective is to ensure that their expertise is delivered to all products with consistency, in response to user’s needs, and with maximum user satisfaction.
So let's now move onto the subject of our review, the Grandia GD02-MT, which is classified as a Micro-ATX HTPC case. It features some welcome additions, which are ideal for HTPC use and we will be putting the case through it's paces. Firstly, let's take a look at the case's specifications, which we obtained directly from the Sliverstone website's product page.
Let's see what Silverstone have to say about their new offering on their product page:
Grandia represents brilliance, and SilverStone’s Grandia GD02 is certainly a brilliant chassis that seamlessly integrates innovation and aesthetics. For the first time, a unique optional 4.3 inch touchscreen makes a debut in a home theater PC enclosure along with a brand new multimedia interface. Its friendly interface allows users to easily control onscreen actions while also providing a dedicated media player right on the front panel. An HTPC enclosure also has never been so powerful yet so compact like the GD02. With a depth of only 360mm, it will comfortably fit inside home theater cabinets but still accommodate a regular sized power supply, Micro-ATX motherboard, and even high end graphics cards up to 11.5 inches. With exquisitely finished hair-brushed aluminum front panel and organic spherical appearance, GD02 is not only designed brilliantly but also looks brilliant.
So there are some big claims there, and we aim to see if they hold true or not.
Moving swiftly on to the next page, we shall discuss the packaging and contents of the product.
«Prev 1 2 3 4 5 6 7 Next»

Luigi
Nice review there, Similar to what ive got atm, the thermaltake DH104...

I found the LCD to be a real dissapointment, took me ages for it to actually find my media, and then I had to use the desktop app to get at it as the LCD didnt find it :S

Anyway, nice one once again stuart!Quote

Rastalovich
Great review. Dont see enough of these reviews about.

Personally I think the prices of these scare people. They look good, have some nice gimmicks, but when all the screws are taken out - it's a pc case. For the same price u can get one of those oversized LL server eatx thingies.Quote

PV5150
Great review as always Stuart, and I'm inclined to agree with Rast's comments above. A thoroughly enjoyable read though

TopSecret
Thanks alot fellas, glad you liked the review. I was concerned over the price too, till I found out the price of small LCD's alone. I was shocked to hear how much they retail for (around £150ish). Considering this, I don't think that the price for the case was unfair. As Rast mentioned though, the LCD's are quite gimmicky and the novelty would soon wear off.Quote
Reply