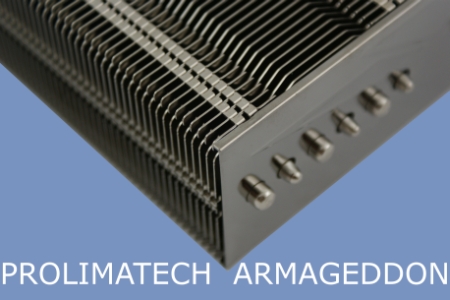 I suppose if you know about Prolimatech, it would be because of the critically acclaimed Megahalems CPU heatsink. But who could blame you as it was a cooler that took many by surprise, especially when it came from a manufacturer that very few knew. Prolimatech may also have toyed with small form factor coolers but we are pleased to say that the brand have returned to the competitive market of tower based coolers.

So is the Armageddon a Megahalems replacement? Well not quite, as the specifications speak for themselves.

The first thing you will have noticed is that the Armageddon is a slimmer cooler. While its proportions permits the installation of 140mm fans, the cooler is just 50mm deep. This of course means it has significantly less surface area than its bigger brother. When you consider this and the fact that a fan of ~800-1200RPM range has been suggested, it is clear that the Armageddon seems to be less of an all out "performance" cooler than a silent cooler.

tinytomlogan
Quote:
I need the forum link before the review can go live so there is always a few minutes that there is no link

killablade
Was this the thing that could influence your advice in that one thread I can not remember the name of?

silenthill
I can see why you didnt overclock the 930 to 4.2GHz (its max stable overclock) because then we will be seeing temperatures around 90 c. Can anyone tell me why would anybody spend 50£ on this fan when you could get an Ultra-120-1366RT eXtreme for 40£ and that will keep any monster overclocked cup tamed. I really dont see the point of producing these products if they cant compete on price or performance maybe these companies are fishing for stupid people who dont read any reviews and just buy on impulse.