Dominating the overclocking scene for over 6 years, OCZ have always been know among enthusiasts for their extreme memory and high performance power supplies. Not content with being "king of the hill" in these two sectors, OCZ now have their sights firmly set on the high-end air cooling market.

When purchasing a new CPU from Intel or AMD, you will quickly find that the stock coolers simply aren't up to the task. This is where solutions from other manufacturers come in to play - and specifically the OCZ Tempest cooler which I'll be taking a look at today.

About OCZ
"Entering the memory market in August 2000, OCZ Technology was built around the determination to manufacture the best high speed DDR and RDRAM. OCZ was founded by enthusiasts, for enthusiasts, and our commitment to the end-user has not digressed. OCZ Technology has been an innovator in many areas. We were the first manufacturer to make Dual Channel optimized memory available to the public, which originally took advantage of nVidia's Twinbank or Dual DDR architecture, found in their nForce chipset. We have now taken that technology and tailored it for the Canterwood, and Granite Bay chipset's. OCZ developed and was the first to implement ULN technology, which has been a critical element in our manufacturing process for some time. We at OCZ diligently work to improve communication with CPU and motherboard chipset manufacturers prior to the release of their products. Only in this manner can we fine-tune our memory's SPD settings, ensuring a synergistic relationship between the memory module, memory controller, and microprocessor. In today’s rapidly evolving semiconductor industry, such communication is not simply research, but a necessary component of our manufacturing process."

The secure packaging of CPU coolers is very important. Metals such as copper and aluminium can easily be damaged transit, hindering the cooling abilities of the heatsink. 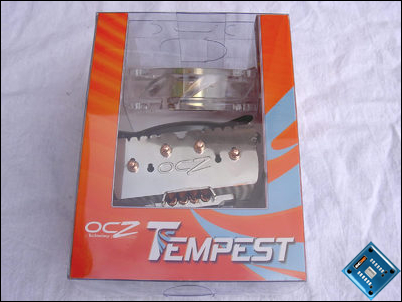 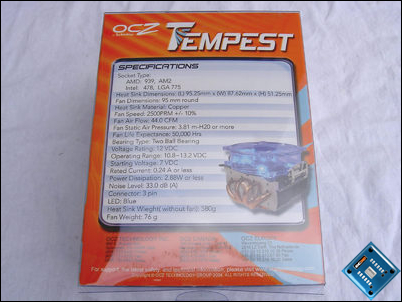 OCZ have chosen to package the Tempest in a clear plastic box with a card insert that spans all sides of the packaging. Around the back of the box OCZ have listed the full specifications of the cooler including its supported socket types, fan specifications, noise levels and the cooler weight.

One minor gripe I had with the packaging was that the heatsink did not appear to be secured in any way, allowing it to freely move around in the box. However, after shaking the box vigorously, I can confirm that it was not possible to cause any damage to the heatsink and therefore shouldn't cause any problems during shipping. 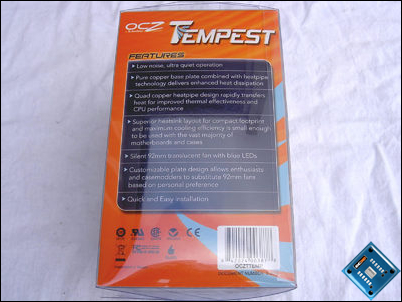 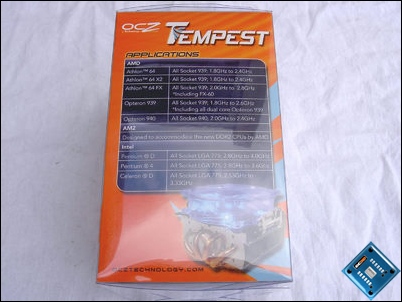 Both sides of the box contain further information on the Tempest, including a more in-depth description of the supported socket/processor types and a full features list which can be seen over the next page.