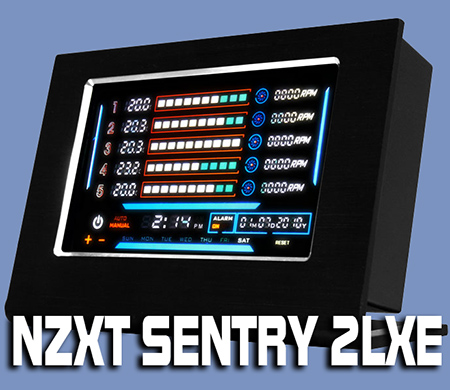 If there is one thing we can pretty much all agree on, it's that we like gadgets. Things that do something cool, or perhaps do something very normal but in a really cool way.

We can also agree that excessive noise from your system is a real pain. Anyone who was in the PC business back in the days of 40mm and 60mm fans endlessly whining away will know exactly what I mean, as will those of you with actively cooled motherboards. Perhaps those of you with Deltas or similar 12v monsters are willing to wear ear defenders in the name of cfm, but for the rest of us this noise is bothersome.

The move to 120mm fans was a huge help in reducing the amount of noise we have to tolerate, but as the fan sizes got larger, components got hotter, and cases became ever larger in an attempt to hold sufficient fans to get some good airflow over these hot parts.

Instead of having one or two tiny fans producing lots of noise, we now have 5 or 6 large fans shifting air to keep the latest hardware cool. Really we're back at square one, just with much faster hardware and a much greater quantity of air being moved.

This is all very well if you are one of the Delta brigade above, or have your system in a spare room and use headphones. But what if, like your faithful reviewer, you are someone with their PC in the lounge. Or perhaps your system is used as a total entertainment/office system rather than just gaming. You certainly don't want a bunch of fans going ten to the dozen when you're trying to balance your chequebook.

Enter the NZXT Sentry 2 LXE fan controller. It absolutely covers the noise element as it enables 'on the fly' adjustment of fan speeds allowing you to turn it all down when you're browsing the internet and push them all back up for your gaming session. Perhaps more importantly it also covers the gadget aspect. A far cry from the "dial" based controllers we're used to, this is entirely touch-screen and external too. But before I get ahead of myself.

Fan controllers being fairly simplistic beasts the technical specifications aren't overly complicated. Nonetheless as always we bring them straight from the horses mouth.

The Sentry 2 LXE fan controller though isn't designed just to do a job discretely. Oh no. This is definitely something to be displayed.

It screams Star Trek and completely solves the problem of not being able to see the fan controller now my PC is on the floor. Perfect

silenthill
Im thinking of getting the Coolermaster HAF X case for my open air system and to make the rig look amazing Ill buy the NZXT Sentry 2 LXE Fan Controller with it but my only concern is will it fit because I have three optical drives to go with it and Im also worried about the installation is it easy or will I be straggling with the Molex cables because the Coolermaster HAF X case has a lot of fans to be honest what I really mean will it do my head in.Quote

VonBlade
Quote:
It's external and all it takes up in your system is a spare PCI slot.


Quote:
Not at all. There is only one molex on the board itself and its positioning, as explained in the review, is such that it's the easiest fan controller installation around.

I've no idea why it's showing as orange to people. It's black here