In Action
Static shots don't do the Sentry 2 justice, so there is a video at the bottom. But for reasons of clarity you still can't beat a good photograph. The only thing that isn't clear in the photographs is that two of the fan blades, on the circular fan selector on the right of the Sentry 2, spin relative to the speed of the selected fan.
Starting at the top left is the basic display of the Sentry 2. Currently I have it configured for Fan One running manually at 70% (which I am using for graphics card exhaust), with the thermal probe on the graphics card itself. If you touch the temperature display for a second it moves from Centigrade to Fahrenheit as shown on the bottom right. Also shown is the fact the plus and minus buttons adjust in 10% steps. 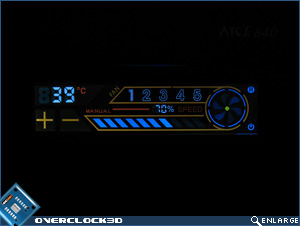 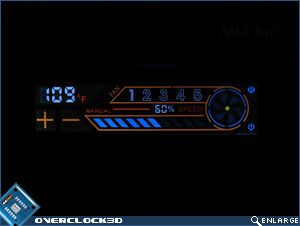 Further displays of the plus and minus abilities. Naturally it maxes out at 100%. On the other end of the scale the lowest value you can reach is 40%. Initially this seems strange, but logically it makes perfect sense. Low RPM fans will end up stopping around there, and if you want to reduce the speed of a high CFM fan below 40%, you might as well use a quiet one anyway. Thankfully NZXT have included a feature that a lot of fan controllers skip, and that is the ability to turn the fan off totally. With modern PC Chassis having multiple large fans, it's great to be able to shut some of them up when you're just browsing the net, or doing gentle tasks, but still have the ability to keep that graphics card cool when the gaming heats up. 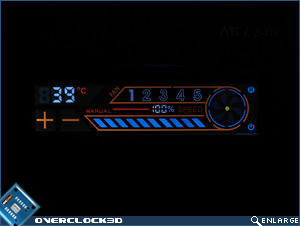 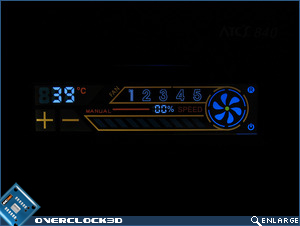 Finally, a demonstration of the excellent auto mode. If you make sure that the thermal probe matches the fan, which is easy to do as they are all numbered, then with careful placing the Sentry 2 will automatically adjust the fan speed to match. It gives yet another layer of control to the user, and control is what we all crave. With the ability to run five fans, it's nice to be able to leave two or three on auto and only adjust those you need rather than manually setting them all or, if like me you prefer not to leave expensive hardware in the hands of a chip, having them all automatically controlled. Be in no doubt though, the NZXT Sentry 2 does a great job at automatically adjusting the speeds.
Finally on the bottom right is the alarm setting. By tapping the temperature display you can access the alarm settings. The plus and minus buttons again help adjust the temperature level at which you'd like the alarm to be triggered. Thankfully this alarm sounds different to the dead fan alarm, allowing you to quickly gauge the problem and deal with it. 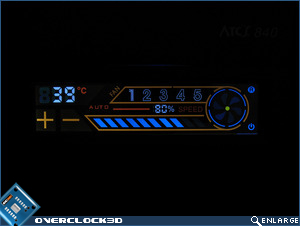 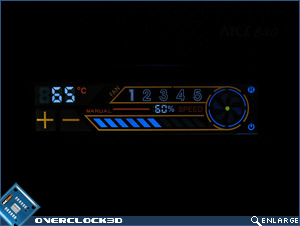 Finally here is a video demonstrating how easy it is to change between the various settings, how little pressure is needed and how speedily the Sentry 2 reacts. The video doesn't replicate the clarity of the display which is fabulously clear and easily viewable from literally every possible angle you can see the screen.
Phew. Time to sum this up.
«Prev 1 2 3 4 5 Next»

zak4994
I don't like the look. Too retro. Reminds me of my dad's car stereo from 7 years ago.Quote

VonBlade
Not quite sure what you mean there Zak

Did your dads old Blaupunkt have a touch screen and no buttons?

How else could you design something for the chubby fingers of todays gaming youth?Quote

ToeJam
hmm, i feel your strereo type chubby gamers dont seem to care to much about fan speed, more for people who enjoy computers in other ways

zak4994
Quote:
The look mate. Not the buttons lol. It looks like a car stereo.Quote
Reply