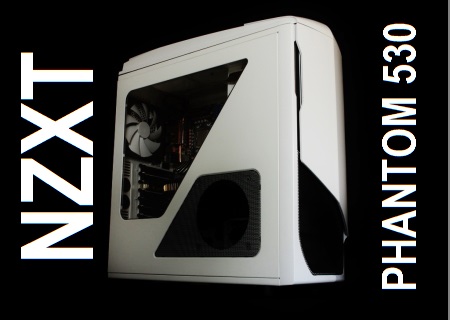 Back at the start of this decade NZXT released the original Phantom.  Representing as it did a bit of a change in aesthetic direction it wasn't without its detractors.  The main criticism levelled at it, and as such, subsequent continuations of the breed was that it was insubstantial and "plasticy", although it has to be said that these comments came predominantly from those who had never actually seen ones in the flesh.  Wind the clock on 3 years and following the larger 820 and 630, and of course the smaller 410, we now have the 530, sitting as you might imagine both size and price wise between the 410 and 630.

In trying to make a little more sense as to where the 530 sits in the range, it's perhaps easier to think of the 530 as a cut down 630 rather than a larger 410.  This is in the main due to it offering much the same functionality of the 630 in a smaller enclosure.

Feronix
Is it just me (or the photos) or is this case just really tall compared to the depth?

Either way, it looks nice. I liked the exterior of the 410/630/820 better but it's not bad. Definitely a good case from NZXT, as I had expected tbh.Quote

SieB
Looks like a decent case, you can see a lot of similarities with it and the Switch 810 though. Not that is a bad thing.Quote

WYP
Looks great, the new window works wonders for the looks of this case.Quote