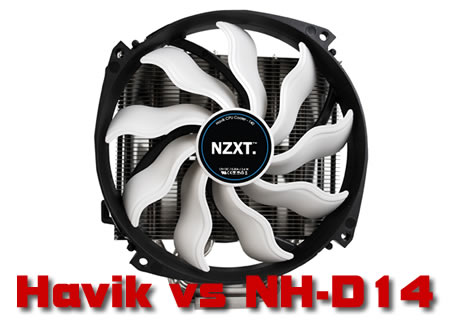 There can't be many readers of OC3D that wont remember the NZXT H2 vs the Fractal R3 face of review we did some time ago. You I'm sure will also remember how badly NZXT reacted to this review. SO badly it has taken us all of this time to finally get a Havik sample out of them, it did cross our minds at one point just to buy one and do the review anyways. But taking on the persistence / borderline harassment leaf out of the hand book from a couple of other websites NZXT finally buckled knowing they had another cooler due out and OC3D's review wont really mean anything so late.......... Shame that.

Anyways its time to have a look at the specifications then get straight on with what will be a rather interesting video review.

The last test is at 4.4GHz, 200x22 @ 1.45v and is an extreme test that only extreme coolers will ever pass. Any cooler in this graph is a one of the elite few that has the cooling ability to dissipate the heat created during this grueling test.

The introduction to this review is quite a bit more cutting than you are probably used to here at OC3D, but we had to get it out there that we were very annoyed by NZXT's reaction to what was only ever honesty with the H2 Review.

They stalled for so long and have only just let us have a Havik sample thinking we cant do any damage now, which is a shame really because the only damage we would be doing would be to OTHER manufacturer sales because to put it simply the Havik is awesome.

The mount is a two stage affair and works very well, everything fits tightly together so the screws and the spacers don't keep falling out all over the place. It all works very well and if you can write your own name you should be able fit this in your rig.

The fan clips are rubber which is a nice touch to stop the fear of one coming loose and shorting out your GPU, but at the same time because they are rubber it would have been nice to have seen one or two spares in the box as I'm sure over time some will break. Also talking about the clips if there isn't much room above your CPU heat sink at the top of the case, make sure you fit the clips at the top of the case first as you will find it easier to stretch the lower ones into place with a bit of extra room.

Fan wise they do seem noisier than the D14 fans but this is pretty much expected as the Noctua fans are famed for their near silent operation.

So it may have seemed negative up to this point although we are only really pointing out some minor observations but the surprising points start now really. It did always fall behind the D14 in terms of performance but as the voltage and clocks increased the gap narrowed, quite the opposite to what we were expecting. During the 4.4GHz test which is nothing short of the most extreme test we could possibly run with a silicone killing 1.45v coursing through the poor old i7 950 the gap closed to just 0.5c! This is the first single tower cooler to have ever performed this well in our 4.4GHz test.

So to summarise, it's a single tower cooler that comes with a pair of relatively quiet 140MM fans that shouldn't effect the main ram slots on most motherboards allowing those of you crazy enough to have massive ram to finally buy a decent air cooler should you need one, and also get near on NH-D14 performance levels.

Its an epic cooler that NZXT really should have sent us sooner, we would go as far to say that this is THE best single tower performance cooler on the market, for those of you stubborn enough to have massive ram and 100% want an air heatsink we honestly think this is the best possible option out there at the moment!

We would like to thank NZXT for having the bravery to let us test the Havik finally. Discuss in the forums.

wotevajjjj
really surprised, I really tought it would get it's ass kicked... now imagine 2 of these on 1 chip... would beat anythingQuote

Solidarity
It performed much better than i thought it was going to.Quote

Terrifictez85
Great review Tom, now hopefully people will see why i rant about this cooler lol

Need to persuade NZXT to create a twin tower version, would be a beast of a cooler.Quote

SieB
There was a member on here that posted his temps using the Havik to cool his 990X at 4.4ghz months ago showing it was just as good as the D14.

Nice to see it get a gold award with a full review and vid though and it's good to know NZXT have finally stopped sulking over the H2 review.

yassarikhan786
Quote:
I remember that

. StreekG is his username iirc.

Brilliant review and really impressive cooler. I might buy one to replace my Hyper 212+, seeing as I have tall ram.Quote
Reply