Fans are predominantly the main source of extracting surplus heat from any PC. With an ever increasing prevalence, many users are now requiring efficient and effective cooling solutions for retaining an acceptable level of heat extraction from their computers. With the increased popularity of alternative methods of cooling, such as watercooling now becoming mainstream; gone are the days when people had to put up with high cfm, screaming banks of fans resounding from their cases.

Further, advancements in active air cooled heatsinks has meant that PC hardware can be cooled efficiently whilst retaining your sense of sanity. For everything but extreme cooling, high dB fans have become a thing of the past. We have also seen a move towards the introduction of HTPC's, where the modern PC becomes almost part of the furniture; and there is certainly little tolerance for exceptionally loud fans.

Noctua, an Austrian based cooling company, has predominantly set its sights on providing end users with a new level of quality and performance by paying attention to the users' needs and providing sound-optimised premium components, which serve their purpose in a smart, precise and reliable manner.

It should be known that this is my first experience with any of Noctua's range of cooling solutions and I must say I'm eager to see how they perform. So let's get down to business. 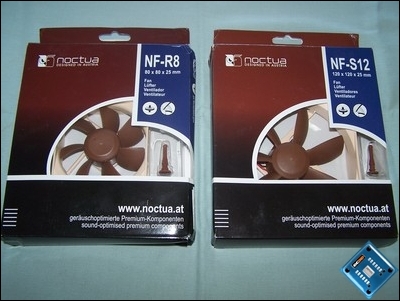 According to the Noctua website the NF Series of fans are offered only in 120mm and 80mm configurations, but the 120mm fan does have a 1200 or 800 rpm variant available. The specifications for the NF-S12 and NF-R8 fans have been included below. (These were taken directly from Noctua's website)


Now that we've seen the specifications of the review specimens, let's delve a little deeper.

JN
Silence is golden...or was that brown

FarFarAway
Aye silence is brown. They are awesome fans. I know, I've got two of em

They really are awesome fans though

MikeEnIke
Quote:
I actually like the colors myself. Quite different. Also, great CFM for such a low noise output

May have to invest in a pair of these.Quote
Reply