On the 5th of November, Austrian based cooling company Noctua released their highly anticipated NF-P12 120mm Fan. The NF-P12 shouldn't be considered as the successor to the NF-S12 merely because it promises better static pressure than what was seen from the NF-S12. The NF-P12 and NF-S12 are designed to compliment each other. Let's hear what Noctua had to say about the NF-P12:

The pressure-optimized Nine Blade Design of the NF-P12 (P stands for pressure, power and performance) has been specifically developed for high-impedance applications such as CPU coolers, water-cooling radiators, power supplies or cases with restrictive fan grills. It achieves outstanding static pressure and high airflow at very low noise levels.

While most conventional 120mm rotors possess seven comparably narrow fan blades, the NF-P12's Nine-Blade Design uses nine large, closely spaced blades with a relatively low angle of attack in order to achieve maximum static pressure and high airflow. As a result, the NF-P12 provides no less than 1.68 mm H2O at 1300 rpm, which is something that other fans merely achieve at 1600 rpm or more.
Now what we are about to conduct is a series of tests to see just how much static pressure the NF-P12 cooling fan will provide. This is not a full review, but should be considered as an addendum to the review conducted previously. Due to severe time constraints static pressure testing was not able to be conducted, nor included in the original review. If you would like to see the original review then head here 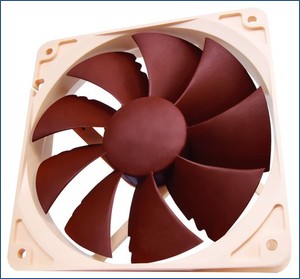 Furthermore; the equipment that I have used for the static pressure testing phase of this review is not, and never will be equal to the testing facilities that Noctua employ. The static pressure results here should be taken as an indication, and I'd like to think of it as a pretty good indication, but once again professional testing laboratories win out over a kitchen table simulation every time.

So without further delay let's get down to the nitty gritty and see how we're going to test the Noctua NF-P12 cooling fan...
«Prev 1 2 3 4 Next»

PV5150
No, thank you mate. I've only added the info that we couldn't get done for your review. But I'm glad you liked it

I'll put a link in your review now as I'm about to head off to bed.Quote
Reply