With the introduction of highly overclockable CPU's like Intel's Core 2 Duo range of processors, we have seen an increase in the damand for cooling solutions that will take the demands of extra heat produced by the chipsets, but are virtually silent. With ever increasing frequency, motherboard manufacturers are turning to proven 'heatpipe technology', in order to deal with this extraneous heat. Heatpipe technology has been used on CPU heatsinks for some time now, and is testament to how effective it really is. The benefits of heatpipes when cooling is not only the heat being drawn away more efficiently, but that it allows the manufacturer to make the heatsink totally passive and silent, or include relatively low cfm fans to provide additional cooling.

Noctua, are an Austrian based aftermarket cooling company, with whom I became acquainted after reviewing their NF-R8 and NF-S12 cooling fans. They had asked if I would be interested in reviewing their new NC-U6 chipset cooler, and I eagerly jumped at the chance. The NC-U6 chipset cooler utilises heatpipe technology and is definitely a great looking cooler; but how does it perform? Let's get it into the OC3D Labs, and take a look. 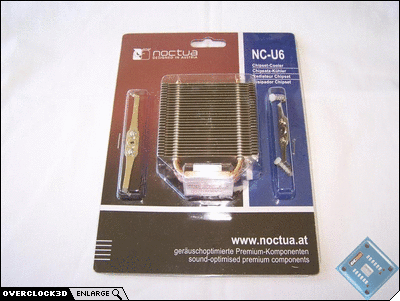 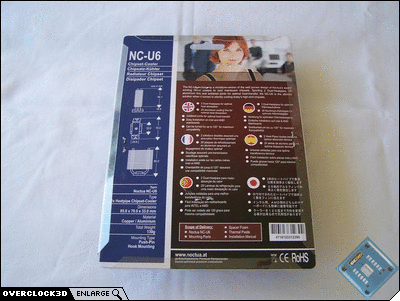 The NC-U6 implements a miniature-version of the well proven design of Noctua's award winning NH-U coolers. Sporting 2 Dual-Heatpipes, 29 aluminium fins and soldered joints for optimal heat-transfer, the NC-U6 is the ultimate solution when it comes to silently cooling today's high-end chipsets. The NC-U6's specifications have been taken directly from Noctua's website and included below.

Now that we've seen the specifications of the NC-U6, let's delve a little deeper...

The packaging that Noctua have chosen to use with the NC-U6 is a fairly standard affair, but is neatly presented and provides ample protection for the chipset cooler. The NC-U6 fits snugly into the bubble pack, and all other necessary fittings are included in behind the cooler itself. 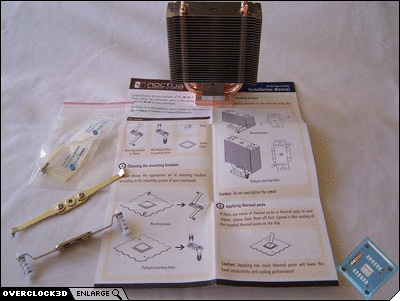 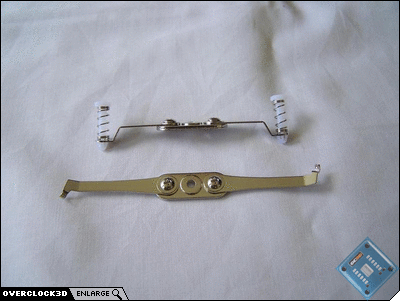 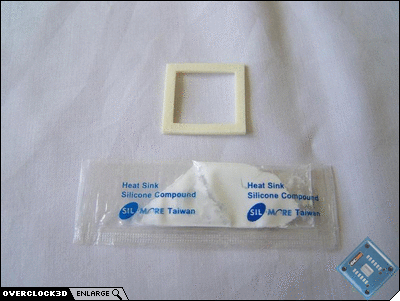 The installation guide provided with the NC-U6 is very well written, with ample pictorial content for the less tech minded. The NC-U6 is intended to be used on both Intel and AMD platforms, so appropriate installation hardware has been included.

I must admit that I had reservations about the strength of the included mounting hardware, particularly with the plastic lugs and springs. But, upon closer examination, my fears were allayed.

Noctua has also included thermal paste and a foam shim to protect the chipset transistors from shorting on the copper base. The thermal paste was particularly interesting because it appeared that the water content had separated from the TIM itself. I managed to get some degree of consistancy from the thermal goop by massaging the packet, and again coaxing the water back into the mix. However, the compound does seem extremely watery, perhaps Noctua could have a look at this problem and find some way of alleviating it. Regardless, there are alternative TIM out there, but for the sake of this review, we will be using the compound supplied.

Rastalovich
Looks really nice, I think the price tag isn`t too bad either. Definately something to consider to replace some of the awful ones mobo manufs put together.

Thing that amazes me is if u look at the item seperately, it looks like it`ll be an awkwardly looking skyscraper of a hs. But when u see it mounted in situ, surrounded by cards etc, u realize it`s more suitable than u might have thought.

Price I seen this @ Performance was about $35 >.< I was thinking it`d be cheaper dollar side.Quote

Mr. Smith
That is a nice little cooler. Quality review too