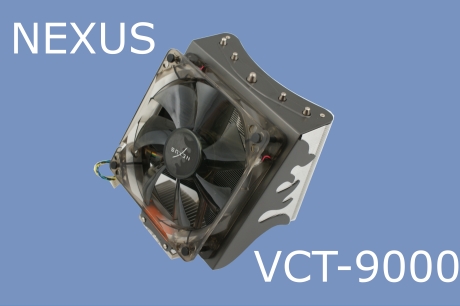 Aftermarket coolers aren't just for those who intend on undertaking obsene overclocks. The traditional heatsink that comes bundled with today's Intel and AMD processors have a number of limitations that inevitably lead to end users purchasing something more capable. While temperatures remain to be the 'make or break' factor, noise levels are just as important. So is your desktop computer whining invariably like a sick puppy? Well look no further as this is what today's review is all about.

Nexus is a name that may not ring a bell for many of you. Formed nearly ten years ago in The Netherlands, Nexus started life as designers of fans and heatsinks. Sporting the goal of "Building a Strong and Reliable Trademark for Silent Computing", Nexus are here to show off their latest offering; the VCT-9000.

So what exactly does Nexus' new cooler have to offer?

On paper, the VCT-9000 sounds very promising. Featuring a number of direct contact heatpipes, a dense fin structure and a fairly large set of dimensions, perhaps we're on to a winner? Let's continue.

silenthill
This cooler is all about style and low noise, it really looks nice and stylish and I think it was designed for people who dont overclock but are more concerned with appearance and quiet environment and the packing looks quite good too but 50 £ is asking too much if it was around 35 £ I think it will sell quite well and NEXUS is not a well known brand.Quote

alienware
It's highly probable it works a ton load better on AMD. Usually when a cooler offers poor performance on Intel they are better suited to AMD and vice versa, good Intel coolers tend to put in a poor show on AMD cpus.

Without sounding like a misery guts this is my only complaint about cooler reviews here on OC3D. I know it's not possible for all of the testers to own two complete sets of kit but it is important to give a wider view of what the cooler is capable of accross the brands.

Any way, nice review as always

alienware
Infact yes, I think my analogy could well be correct. Coolers with direct contact heat pipes are usually wicked on AMD.Quote

silenthill
Quote:
what about the Titan Fenrir it was great on both the AMD and INTEL CPUsQuote