DoubleTwin
Moving on now to Nexus's Hard Disk Mounting kit, designed to stop vibration resulting in a more silent hard drive. Let's have a look at the packaging. 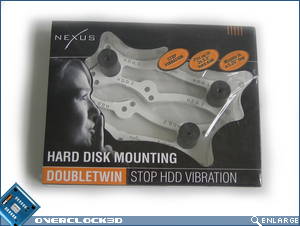 As you can see from the image, the box is rather average. A plastic window shaped like the actual kit allows you to see in on the mounting brackets. Three orange ovals in the top right corner describe what the brackets achieve: "Stop Vibration", "Fits up to 2x3.5" hard disks" and "Mounts in a 5.25" bay". Let's now look at the specs:
Specifications - Taken from Nexus website.
- Model number: DoubleTwin
- Dimensions: 113x34x23 mm
- Compatibility: one or two 3.5" HDD
- Weight: 45 grams (per unit)
- Materials: Solid Aluminum, Solid Rubber, Mounting Screws
- Warranty: 3 Years
Right, now for a closer look at DoubleTwin. 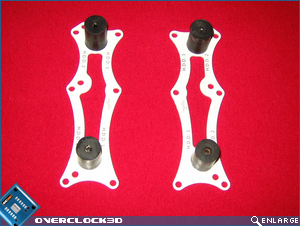 As you can see the build is pretty solid and the rubber absorbers look like they will do the job. 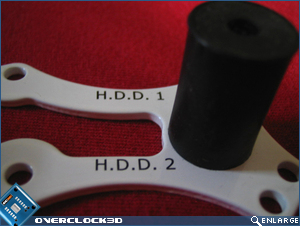 So far they look quite promising. Let's fit them to a harddisk and see how it goes. Installation is relatively easy. All you need is a screw driver and some standard screws. Once the hard drives are fastened to the mounts, they do look pretty, uhm, cool. I think my only doubt about the DoubleTwin so far is the fact that they take up space in the 5.25" drive bay. Below are some pictures of what the drives look like when mounted to the DoubleTwin. 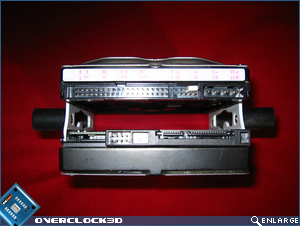 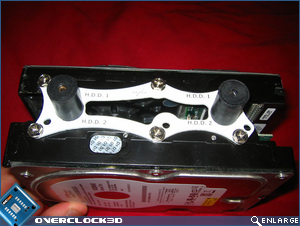 As you can see from the picture on the left, mounting two harddisks to the DoubleTwin still allows space between for airflow, so there is no need to worry about overheating the drives. Another interesting thing is the bottom drive (SATA one) is mounted upside down, once again helping cool the chip on under-side. 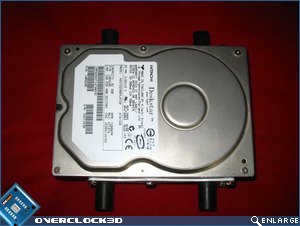 Overall, the DoubleTwin does its job; it certainly stops the vibration of the drives resulting in near silent operation. But I did test with two drives - one my latest and most modern SATA2 Western Digital and the second an old IDE Hatachi Deskstar. What this showed me is that the mounting kit did nothing to help the new Western Digital, mainly because modern hard drives have very little vibration, whereas for the old rickety IDE drive, the kit silenced the drive's operation. If you have an old hard disk and want to silence the vibration, this mount kit will do the job. If not, then you will not gain from this at all.
Now, let's move on to another.
«Prev 1 2 3 4 5 6 7 Next»

I am to surprised with the Hard Drive cooler.Quote

ali_james
Nice review man, is this your first?

I like the look of the hard disk cooler, very good results from it too.

Toxcity
That HDD cooler was a huge surprise. I am very impressed with it.

This was my second review.. first can be found here.Quote
Reply