Introduction - This case is overbuilt, in a good way

Lian Li put a lot of effort into this case, and it shows

It often feels like many PC cases are designed using checklists. Tempered Glass? check. RGB fans? Check. Mesh front for airflow? Check. This has left us with a PC market where many cases lack personality and soul, features that make specific cases unique and convince us that the engineers behind them were genuinely enthusiastic about their jobs.

With Lian Li's new LANCOOL III chassis, we have a case that has spirit. In many ways it is over-engineered in the best way. It is clear to us that Lian Li created this chassis as a labour of love, and not as a simple box ticking exercise. Why do we say this? We say this because Lian Li has included features that don't need to be there, options that elevate the Lancool III above many of its peers. These features make it clear that this case was designed by a real hardware enthusiast, and not somebody that's merely copying the popular features from competing designs.

If we sound enthusiastic about the Lancool III, it's because we are. There is a lot that we like about this case, and in a sense this review is our love letter to the case's designers. They did an excellent job here, and we are looking forward to seeing more of this with the team's future case designs.

Having recieved this case pre-launch, we only have access to this case's US price tag. We hope to update this review with UK pricing soon, but here is what PC builders should expect to pay for a Lancool III. The addition of RGB fans costs an additional $10, as does the case's white option. All models ship with three front-mounted fans and a single rear mounted fan.

In the UK, LAIN LI's LANCOOL III is available to purchase at Overclockers UK.

By shipping all of the LANCOOL III's models with the same number of fans highlights the intent of LIAN LI's design team. They wanted the LANCOOL III to deliver strong cooling performance, and refused to cut costs with their non-RGB model by shipping the case with fewer fans. Many manufacturers ship their non-RGB cases with too few fans, compromising their designs to hit a lower price point while forcing their users to either deal with sub-optimal airflow or purchase more fans.

Being a large case, the LANCOOL III supports E-ATX motherboards that are under 280mm wide, which should come as great news for anyone building a workstation system with high-end desktop processors like AMD's Ryzen Threadripper lineup. Both side panels of this case are tempered glass, and aside from the case's aluminium door handles, most of the Lancool III is built using steel.

We will discuss liquid cooling and radiator support later in this review, for now we will say that the LANCOOL III supports front/bottom mounted 360mm radiators and a top mounted 420mm radiator. This should be more then enough for all modern PC setups, even ultra-high-end ones.

Storage-wise, the LANCOOL III has two 2.5-inch mounting points behind its motherboard try, three 2.5-inch shots above its PSU chamber, three 2.5-inch mounting locations behind a flip panel, and four 3.5/2.5-inch cages under the case's PSU tray. These spaces are ideal for storage drives, RGB controllers, fan controllers and other accessories. There is plenty of room in the LANCOOL III for large creator systems that feature a lot of storage drives and accessories. 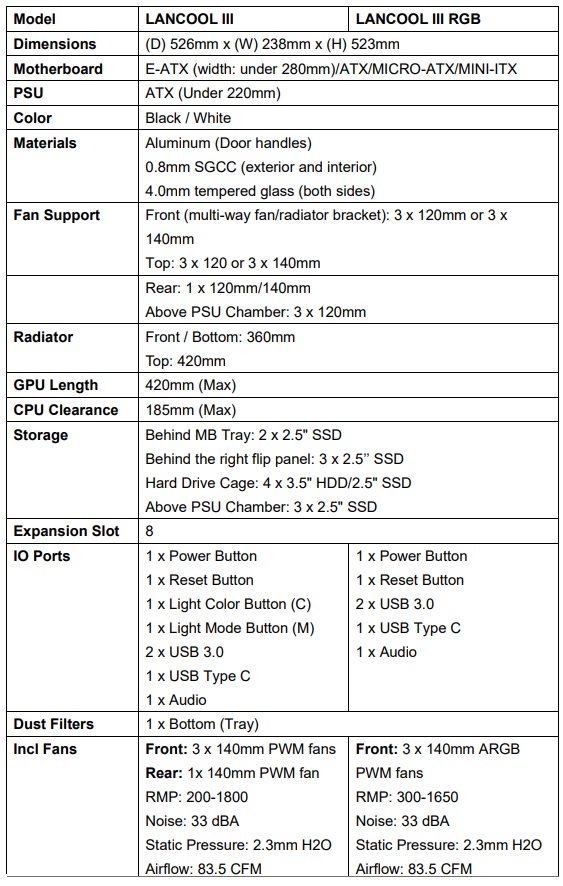 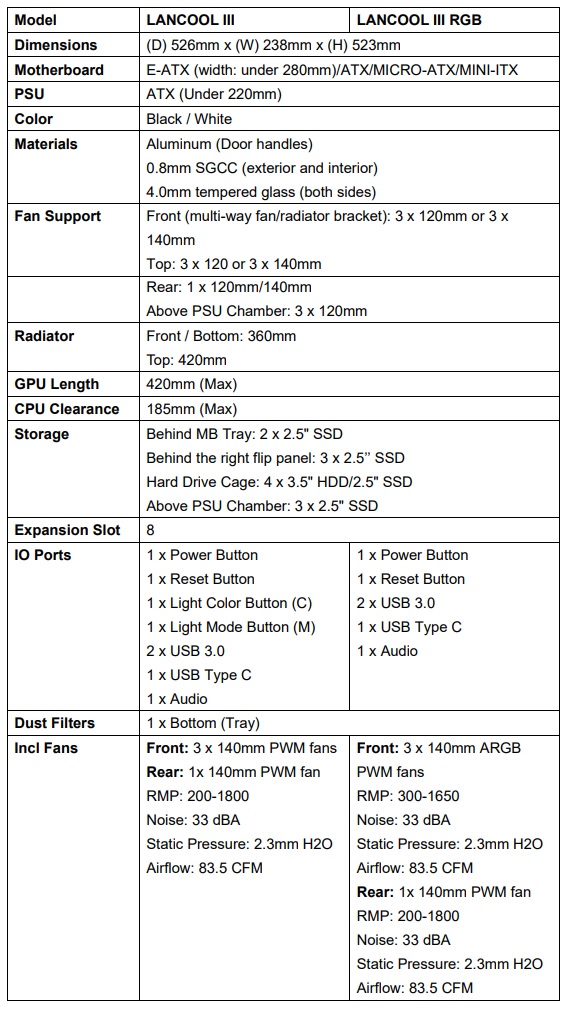 Peace ą
The opening part of the article is misleading as in the 2nd page's top picture AND the table on the bottom of the 1st page, it's cleary visible and said that the RGB version does NOT ship with a rear mounted fan...
//EDIT: This means that not all versions ship with the same amount of fans. Later in the article it's said that usually, manufacturers ship their non-RGB versions with less fans and LianLi are a good example of the opposite.

The 1000 RPM Testing graph also doesn't have a green indicator for the case.

Otherwise it's a darn sexy case for this price! Sorry for the nitpicking!Quote

WYP
Quote:
It does ship with a rear 140mm fan. The picture on the second page is must be an out of date image from Lian Li. I will fix that shortly. I will also make sure the charts are fixed.Quote

I built in the Lancool ages ago (for a PC I was selling off) and it was incredible. I then saw all of the improvements they made to the LCII. So much so that when my pal asked me to order him a case from OCUK (because I get free shipping) I actually chucked in ┬Ż30 and bought him the LCII rather than the case he wanted. He was absolutely thrilled.

It's so nice to see the ingenuity going into this case. Lian Li are deffo OGs, so it's nice to see them still really pushing the envelope. Those front "handles" are a genius touch.

It's just the sheer engineering pron that goes into this stuff. Incredible !!Quote

Lonestar166
As always, an excellent review Guv. Will you eventually do a gaming build for us in this case?

I see and understand your enthusiasm regarding this case, it definitely ticks a lot of boxes for me as well. It may very well be the case I choose for my new build. I just did a quick check online and I'm not sure if it is available yet here in Toronto Canada.
Cheers Tiny One, have a great day, hi to puss.Quote

Dawelio
Quote:
Yeah, totally agree. Just look at their UniFans, such an innovation in itself and they just keep on innovating them, new connectors, removeable corner connectors if you don┬Æt want them etc.

Lian Li is certainly one of the very few companies that are genuine enthusiasts and that are bringing both innovation and customer feedback to their products.

Not like Corsair, who still haven┬Æt figured out their headache of cable management mess that is their fans. And iCUE as I┬Æve read many still dislike a lot.Quote
Reply