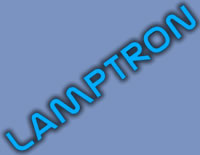 In the world of fan controllers manufacturers such as Zalman, Akasa and Scythe are often the fist port of call for enthusiasts looking to bring some silence to their high end PC systems kitted out with large numbers of fans. However, while most fan controllers do this job perfectly; taming anything from four to eight fans from a single drive bay, certain fans out there such as those available from Delta and Panaflo draw far too much power and can easily burn out a standard fan controller in a matter of seconds.

For this reason, a fairly new player to the scene: Lamptron have brought it upon themselves to produce a rheobus based fan controller capable of taming up to six fans rated at 45w (or 3.75 amps) each. Considering that most standard fans consume less than 0.5 amps and even some of the most powerful Delta fans require less than 3 amps, the Lamptron FC-2 certainly sounds fully equipped to put the likes of the Delta GFB1212VHW and TFB1212GHE monsters back into their cages. However, before we get down to business, let's see what China based Lamptron have to say about their latest creation:

Lamptron Innovative Fan Control/Rheobus-FC2 is a working result of Lamptron end users and Lamptron Design Group.
The Control Panel is CNC milled from blocks of 3/4" thick solid aluminum.
Each channel supports up to 45 Watts. The knobs are all LED lit a beautiful blue color.
This is the unit to get if you want smooth speed control and you will be adjusting your fans often.
The Lamptron FC2 is meant for the power user that wants the best!

Luigi
This is a very nice read, such a big shame it didnt live up to its claimes.. I would love to have my pc kitted out with deltas quietly purring, then jam them up and suck my room in!Quote

Shame its performance sucks though. I was looking around for a good fancontroller, but this one is certainly not on the shortlist.Quote

Shame the controller doesn't really work... Would be nice to be able to tame Deltas down to a half reasonable level.Quote

JN
Quote:
Well spotted. Will fix that in a sec.

Yeah I'm mass disappointed to. I really wanted to use a pair of these in my next build, but as I've got a box full of about 20 Delta's here which sound absolutely awful when hooked up to this controller, it gets a big fat thumbs down from me.Quote

Bungral
Quote:
Is there any voltage you reckon that Deltas will still run but be near silent?

If so then someone coming out with a seriously good fan controller would be well worth the effort. Whack them up to hurricane for benching and then back down for normal use.

If you come across a good controller for Deltas, let me know and I'll buy some fans off ya