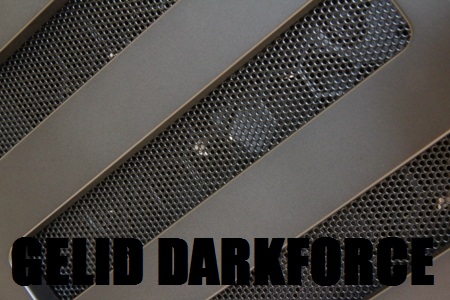 The Interior of the case is finished in a satin Black which nicely counterpoints the matte and satin of the exterior.   A large CPU cut out makes things easier when it comes to swapping out the CPU cooler.  Gelid have provided 5 oval cable management holes in the case 4 spaced vertically along what would be the right hand edge of the motherboard and the fifth horizontally at the base.  Round the back we see that although there is some space for cable management Gelid have not been over generous with the 15mm space they have allowed back there.  They have however been more than generous with no less than 8 cable tie mounting points. 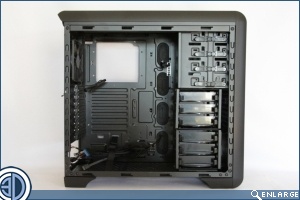 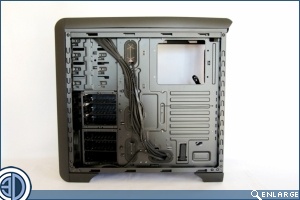 Taking a closer look at the drive bays, the 5.25" bays are all of the tool-less type, with an innovative hinged  mechanism locking the devices in place.  under the 5.25" bays live the HDD racks.  Separated into 2 sections of 3, each pod of 3 is removable to allow accommodation of GPUs over 11.5 Inches (allowing up to a maximum of 16")  Each drive drawer is removable and is able to hold both 2.5" and 3.5" drives via screw mounting from either the side or underneath. 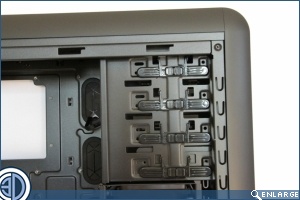 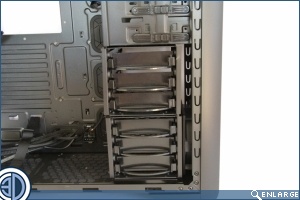 The images below show the internal drive bays in progressive states of removal.  At the very bottom of the case lies an additional internal drive bay area, which can be left in place if all other bays have been removed, or removed itself to aid in fitting of additional floor fans or as Gelid claim, a 120 or 240mm radiator.  I have to honest though slotting a 240mm in the base is going to be a snug fit and you're going to have to take into account the size of your PSU and the way the cables exit it. 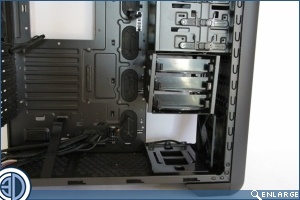 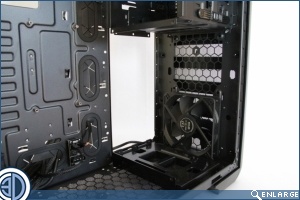 While we're looking at the front of the case it should be noted that although Gelid have only fitted a single 120mm fan it is possible to fit 2x120mm fans in this area.  Unfortunately the only filtering here is provided by the circular mesh which makes up the grill itself, and can only be cleaned by removing the front of the case. 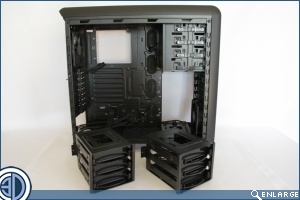 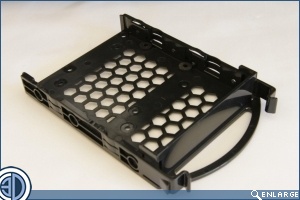 While we're down the bottom lets have a gander at the PSU mounting area.  The Darkforce is able to accept full size ATX PSUs, but anything longer than 150mm will start to obscure the lowermost cable management hole as well as affecting the ability to install any rads in the base.  Anti vibration is provided by small raised rubber pads, as well as a securing strap should you be concerned that your PSU may make a bid for freedom.

The final thing I want to point out in the base of this case is something I'm particularly pleased about.  Those of you who have read my other reviews will know I have something of a fetish for having braided cables.  Well I'm pleased to announce that Gelid have succeeded where others have failed and braided the majority of the front I/O cables, with those not braided being black anyway.  Top marks to Gelid for this. 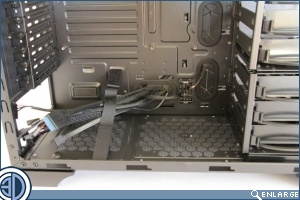 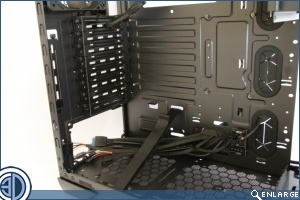 Before we leave the interior and move to the build lets take a look at the roof area and cooling in general.  We already know we can put 2x120 or 140 fans on the base, and perhaps a 240mm rad.  We know the front will take 2x120mm fans and comes fitted with one already.  We also know that the rear comes with a 120mm extract.  What we haven't seen yet is that the roof of the case will also accept 2x120mm or 2x140mm fans internally.  I had a look to see what the odds where of getting a rad up there and I have to say although a rad would just about fit there's no clearance to the motherboard for fans to fit in so it's a bit of a non starter. 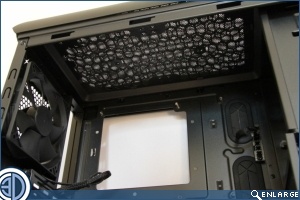 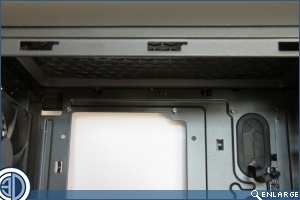 The sharp eyed amongst you will have noticed a few little 3 pin connection blocks strategically placed around the interior of the case.  These as you've probably guessed are fan headers.  The lower most header is fed via a 4pin molex providing power for 4x3pin headers.  One of these can be used to piggyback some juice up to the upper most header which will then be able to output to 3x3 pin headers.  When I saw this nifty little feature I instantly thought how the hell did I fail to spot the fan controller on the front I/O panel, so following a quick face palm went to look for it assuming I'd missed it as it was so stealthily located so as not to ruin the sleek lines.  Turns out the reason I can't find it is that it isn't there.  Shame really after going to the trouble of providing the ability to link all fans together not to provide the ability to control them all. 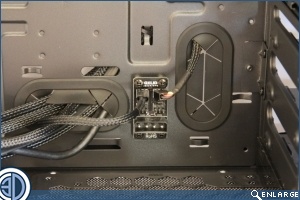 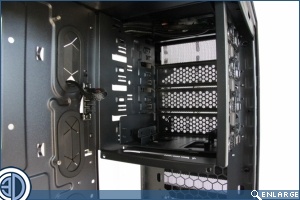 SieB
Another 690 II OEM design, do people even try anymore

I really wish companies like Gelid just focused on their strengths. What's the unique selling point of this case? Derivative, bland looks, average price at best, average build quality. How anyone at Gelid thought it's a good idea releasing it is beyond me. Case might not be terrible on its own, but when put against the competition there is really no reason for anyone to buy this case. The R3 has the minimalist looks and sound insulation, Utgard better features and a more competitive price, lower end Corsair cases offer better looks and build quality for the same prices. I could go on with this. Lesson for Gelid and other similar outfits is if the best you can do is release an adequate, me too, product, then just don't bother.

I hope this one is shaping up nicely.Quote

daniSAUR
Quote:
Just about to say this!

magicc8ball
At first I really liked the color of the case but as I kept on reading it just got more and more bleh. To what Sieb said no there are very few that will try and make something worth buying. Someone makes something that works good and then everyone else just jumps on the train and keeps riding even after the consumers and tired of the same old thing...

Good review Tom! I am looking forward to your 680 review as it should be coming out really soon

Computer crazy
Nice review, however it is competing in an area of the market which is already filled with great cases. The design isn't anything massively different or new either.