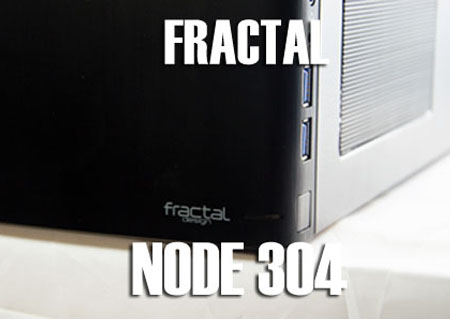 Fractal have made a sterling effort to create a great mini-ITX case. Have they succeeded? We'll explain our thoughts below.

As soon you remove the case from the box, even if the logo wasnt situated at the front of the case you could tell it was a Fractal case. Fractal have created a formula for creating a sleek, stunning cases and have continued to use it for some time now. It's these design choices that make a lot of Fractal cases a good choice for home theatre PC's that could be situation in someone's front room beside the TV and not look out of place.

The Node 304 caters for those who may also look to use this case as a network-attached storage device as it is able to cater for 6x 3.5" hard drives which is a rare feature with cases this small. However the most impressive feature of the case is infact its air flow and cooling potential. We couldn't help but notice that we had ample space surrounding the motherboard which would allow for larger CPU heat sinks to be fitted if stock cooling was inadequate. That cooling potential, when matched with the airflow from the 3 front 90mm fans and the rear 140mm which remained quiet throughout testing, is something that cannot be over-looked.

Whilst the Node 304 performs well in some aspects, unfortunately we found it wanting in others. For example, we found the general installation a little tricky at first due to the limited space surrounding the power supply. For users with a non-modular units, things can quickly get cramped and messy. Trying not to obstruct the air flow provided by the case fans we felt was somewhat a test of how one's PC building ability can be measured.
With that in mind, the length of the power supply also affects what size graphics card can be fitted. Fractal have openly stated that a PSU size of 160mm limits the GPU size, this means the likes of the Corsair AX and AXi series PSU's can be used so with up to 860W available whilst staying within the required form factor this could pretty much power and CPU/GPU combo you could possibly want to install in this case.

Priced around the region of £65-£70, the Fractal Node 304 is a little on the expensive side compared to some of its rivals. However, it is justified as it comes supplied with all 4 fans and a built in fan controller - a feature that could significantly add to the cost of a case that doesn't come with one fitted. The build quality is solid and the case is nicely ventilated, plus with the ability for this to be used as a smart looking HTPC and/or a nas unit makes it stand out from the crowd and not only justify its price but also the OC3D Gold award.

Thanks to Fractal for sending the 304 over for review, you can discuss your thoughts in the OC3D Forums.

BeyondNight
Not to be intruding or anything but i though the fractal fans in the case and the mounts were for 92mm fans not 90mm ? as i can only see the 92mm fan dimension listed on there site.Quote

tinytomlogan
They are indeed 92 mate

One-Hand
Any chance you could remove the hard drive mounts and mod the case so a radiator would fit between the metal bars that are used for the drives?Quote

Mullet
Nice looking case.... have an option on one