Well it looks like the S36 is off to a cracking start, straight into the lead out of the gate.  But hey, who cares about the undervolted temps?  Onwards and upwards.

At the higher levels of heat generated by the increase in voltage required for the 4.0GHz overclock, fan performance, although still a factor becomes less critical, replaced instead by a coolers ability to conduct the heat up the heat pipes and more crucially the total surface area of the fins enabling convection to the atmosphere.  In the case of AIOs and water cooling the surface area of the radiator and the efficiency of the contact plate begin to play more of a role.

Not so good as we had hoped, the S36 has slipped a little which is surprising for a radiator this big.  If you look though, there's actually only 0.7 of a degree between the top five so all is not yet lost.

The S36 has gained a bit of ground back but is still a degree behind the Nepton 280L. 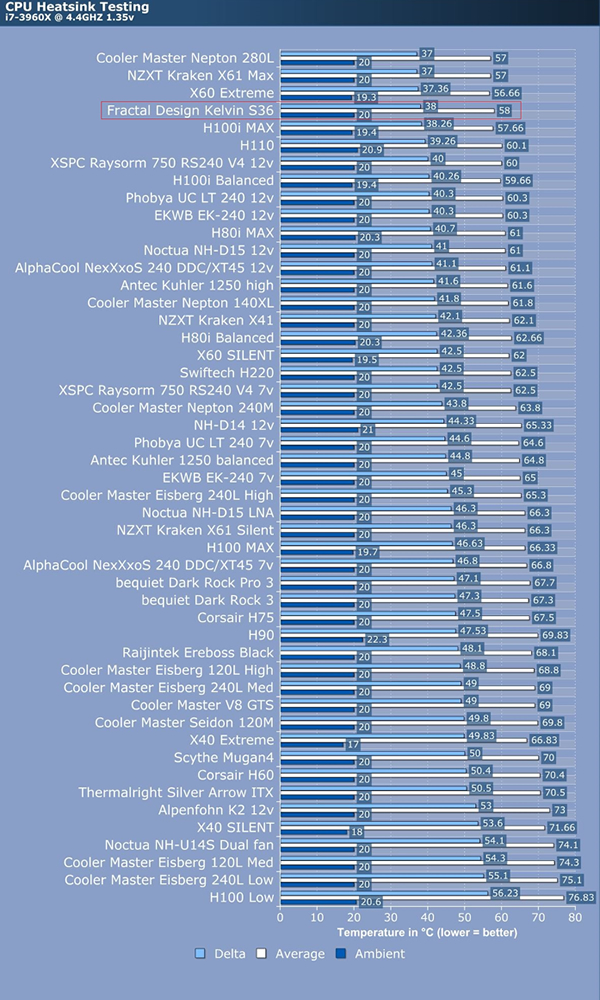 Only the most effective coolers are capable of making it into the hallowed 4.6GHz club and as you can see in the graph below there isn't a single air cooler in this graph, even the NH-D14 does not have enough cooling potential to be featured here. So all that has made this graph so far are the AIO big players and dedicated custom watercooling kits.

There's nothing like a close race to get your heart pounding and the S36 sure got us worried for a while.  As it is though it romps home with a win.  The real test of the Kelvin series though will come when we look at how the S24 measures up. 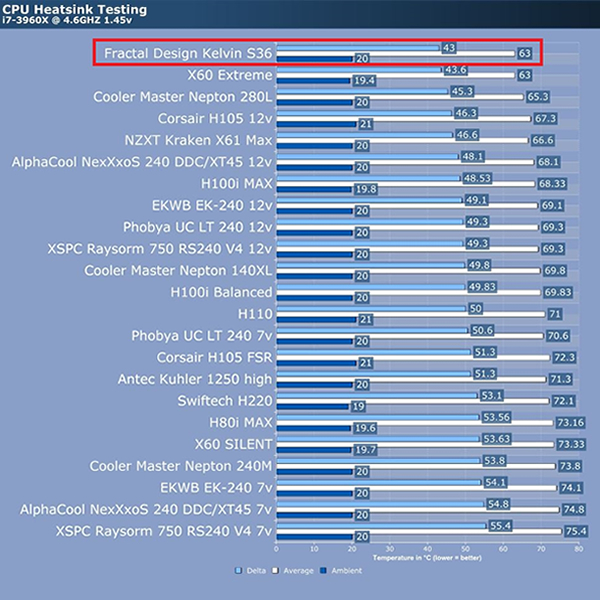 TPC
For that price an absolute beastQuote

Do they have any plans to sell the pump/block just on it's own? I wouldn't really want the rad, or the fittings, or the tubing, or the fans and I would be tempted to mod the casing but still I just like the pump unit. Does it run off a molex or a 3-pin guv?

Part of me feels like a Corsair 360 Rad isn't far off though. May be wrong but seems the logical step for themQuote

NeverBackDown
It didn't perform like i thought it would. I was expecting to pull further ahead in the last 2 graphs considering there's more surface area. I think it's the fans though. If they were less silent but ran at higher rpms they would have really taken the temps down. Though still isn't worth the noise. Just something worth pointing out.

Now i want one... best AIO on the market while being silent? Yes please!Quote
Reply