With the R6 stripped down to its underpants, building into it is simplicity itself.  With a standard ATX board, there's plenty of room, especially with all the baffles, bells and whistles removed.  As you can see, we've made use of the vertical GPU mount, and, for a few quid extra, the flex PCI adapter.  What really calls out to us though is the sheer massiveness of the space up front for monster radage. 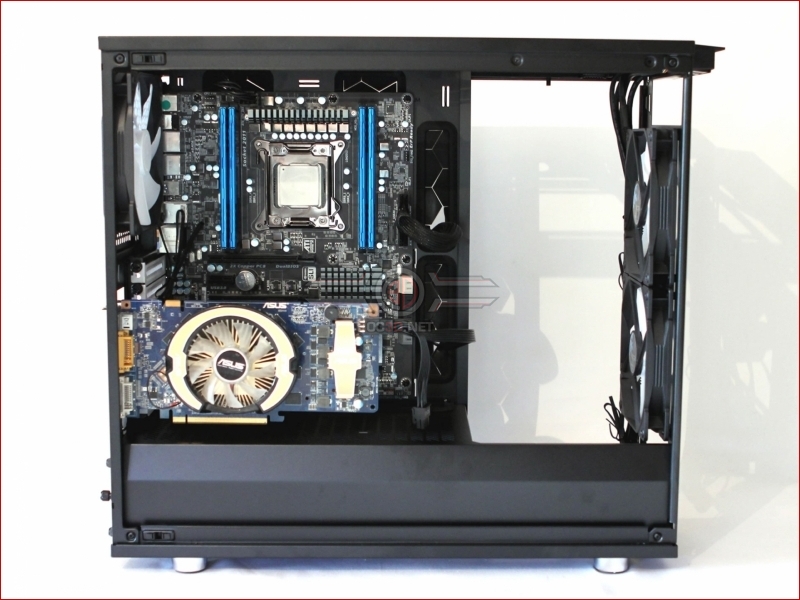 There may be some mighty wonderful things going on in the whole general mish-mash of case appreciation, but that's not to say that when we get down to the nitty gritty, there aren't some important little areas of attention to detail.  One of these little areas is the nicely grommeted cable management hole just underneath the front I/O and USB/SATA area of the Motherboard. 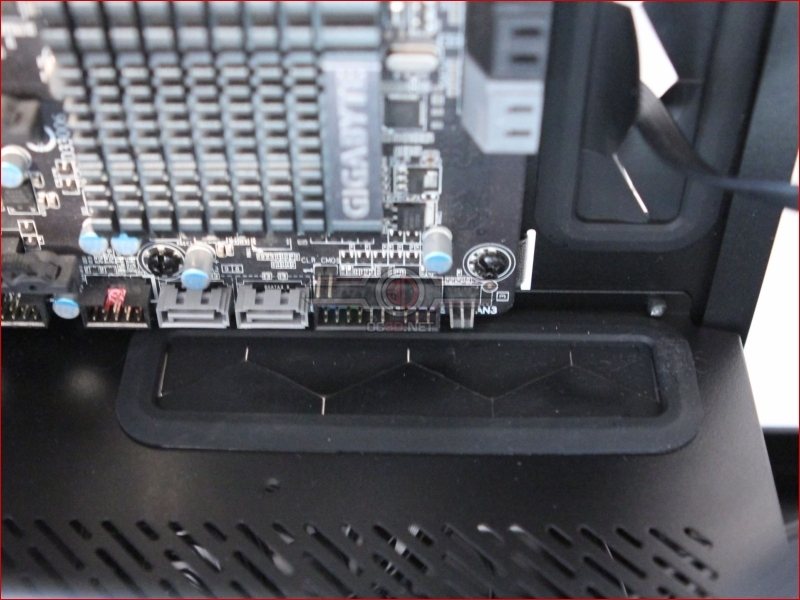 As we said earlier, there's a fair bit of space to be had up front.  In fact, getting as tape measure on it reveals that there's actually 175mm of room between the inside edge of the case and the beginning of the Motherboard tray area.  Now, with fat rads in mind, we defy you to find a push pull combination that would exceed this requirement. 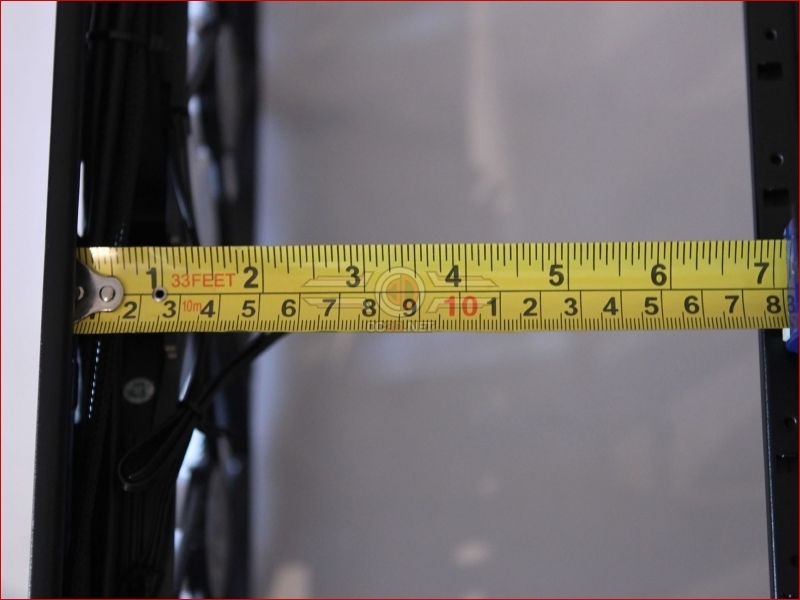 OK, so a 360 in the roof...That's no big deal right?  Well actually it is.  We can count on one hand the number of decent cases that can take a 360 in the roof.  But what if we told you the R6 could also take a 420 in the roof?  Yeah, us to!!!  As you might imagine there are a few caveats to that, not least of which is that there mustn't be anything higher than 36mm on the Motherboard in the respective area. 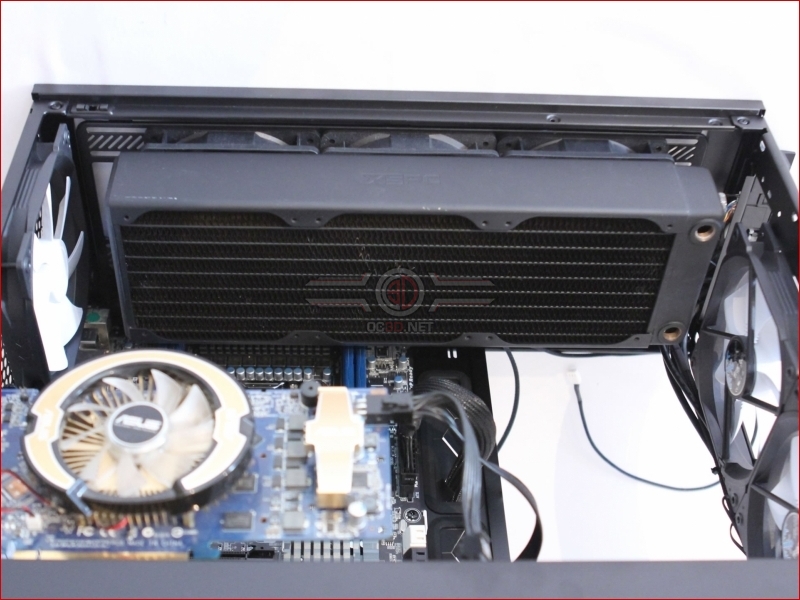 Even if you fit a 360, things are fairly tight.  here we can see that we have a maximum of 12mm between the rad and the edge of the RAM, and that's assuming you want to take your rad out before you un-click your RAM. 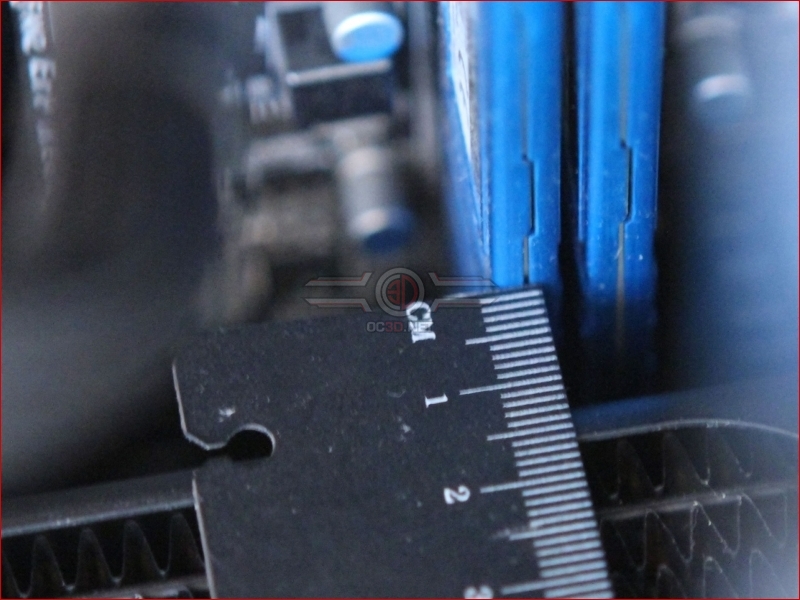 Even with a medium thickness rad in the roof, you might want to think twice before going push pull, as you're going to seriously encroach on your CPU and RAM area. 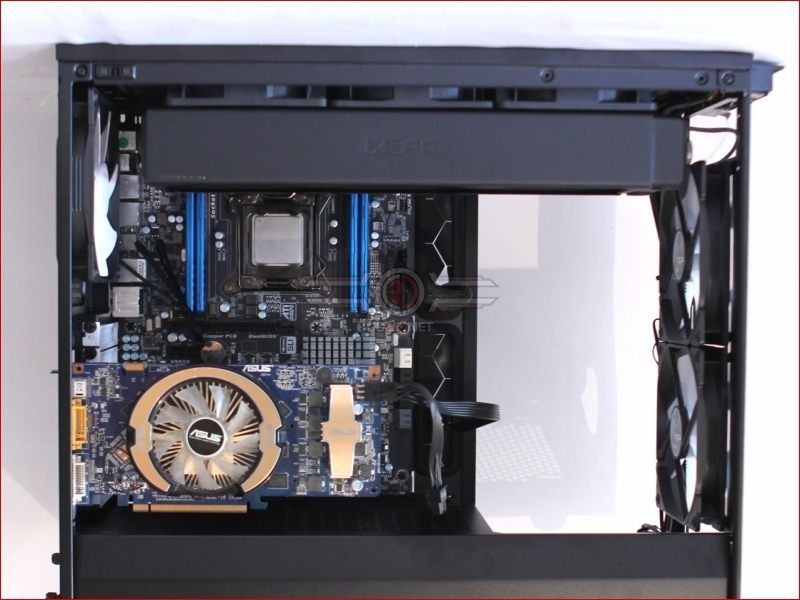 If the above images have yo a little worried that the R6 isn't the all round water cooling god we think it is, then you might want to dwell on what you can fit  in the front.  The answer of course, is pretty much anything you want.  With a good 175mm of space on offer we don't think there's a single rad you couldn't put in there in a push pull configuration, and still not have it look too cramped.  If you're worried about storage, then the panel that was removed from the front side earlier can actually be mounted in the vacant area on the motherboard side of the rad and offers the ability to mount 2x3.5" HDDs in a stealth position.  Man, it's almost like Fractal have really thought this case through. 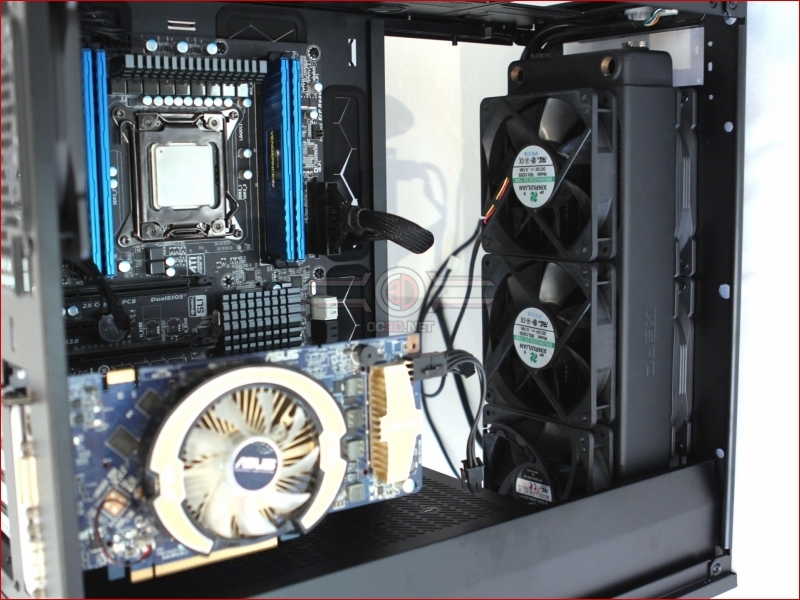 Avet
Oh Fractal. This could have been the best case of the decade.

Things i like:
-All that Fractal white...
-White bezels on the glass. So many manufacturers (Lian Li, NZXT) just put black bezels on white cases. Not good. Thank you Fractal for not cheeping out on that.
-Modular front part. You can have R or S beautiful.

Epic fails:
-What is going on with the top? Why put that monstrosity there? Why eat up top radiator space? Just make it like Define S and give it magnetic filter in the box, and make moduvent from metal. No need for that bulky thing. You could have saved a lot of money from pintless tooling.
-Front.. OMG! Why put stupid CD drive bay and waste such a good case. Tom you said you wanted to mod that vent mesh onto it. Imagine white Meshify front on this one. I am getting funny feeling in my pants only by thinking about it.

Because of that transformer front thingy i assume that there wont be a new Define S. This is kinda both. All i think about now is how to bash metal mesh with a hammer just to make that front panel look good.

Every single review i saw of Meshify C was "How masterful is that front?!" and every comment was "Where is Meshify S?". And this case could be that one. And what does Fractal do? Slab a big BLACK metal plate on white case only to have CD drive bay in which you probably can't put ROG DAC, or Fan controller because the door wouldn't close over the knob. If there was no CD drive bay there would be no point for a door. And we could have white Meshyfy R5. Are you reading this Fractal???

I know R series was your most popular case. But that was decades ago. When we had 80GB HDDs and we needed 10 bays in the front so we can install games and have music on our system. And we needed CD drive bays, because internet was slow and games came in small plastic boxes. Cmon Fractal...

Tom please give me a hint if there will be Meshify S. I wont tell. PM me.Quote

Avet
Quote:
It does exist, and it is made by HEX-GEAR (in my opinion). This could be the one to take the throne (i'm a poet now) if only it had better front and top. Every other thing is perfect.Quote

Bartacus
I find Fractal cases boring as hell, and this looks to be no different. Great to work in for sure, but it's so boring looking, plain jane black box.Quote