From our first glance at Fractal's Define 7, we knew that we were going to enjoy reviewing this case. Fractal is a company that listens to its community, and once we opened the front door of this case, we could see the truth of that statement.

At the top of the Define 7 sits space for a 5.25-inch drive, and unlike previous entries in the Define series, the cover of this drive bay is filtered. Better still, Fractal has allowed its users to mount fans in this location, which is great news for those who no longer use 5.25-inch drive bays. Why do we like the fact that this is filtered? Because we gave Fractal that feedback in the past. Our managing director, TinyTomLogan has even modded this feature into his Define R5. This is a great addition to Fractal's Define 7, but there's more to Fractal's latest enclosure than that.

Fractal's Define 7 is designed to be versatile, suiting the needs of those who still require disk drives while also catering to the growing majority of PC builders who no longer utilise optical media.

Another neat feature of Fractal's Define 7 is that the case's hinges can be moved to better suit the case's users. Want the door to open the other way? A few minutes with a screwdriver will fix that. Beyond that, Fractal's hinges really add to this case's premium feel, which is something which we have drawn attention to in this case's video review. 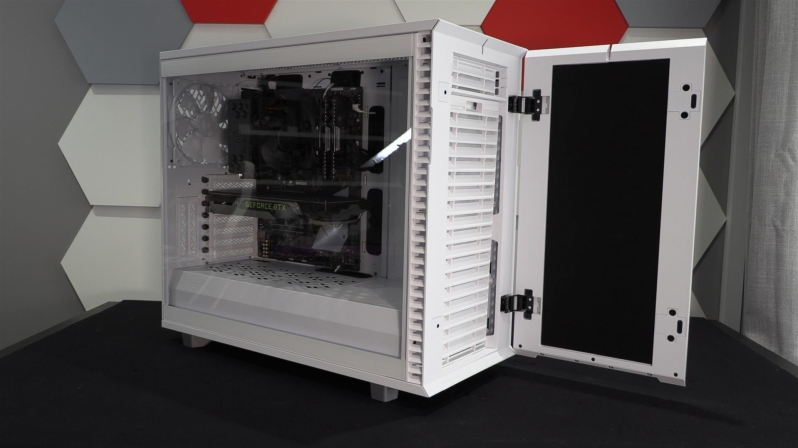 On the top of Fractal's Define 7 sits a large, vented top plate, which can be removed in a flash to reveal a large dust filter to reveal enough space for up to three 140mm fans. This factor makes the Define 7 easy to clean and provides enough coverage to ensure that anyone with a hoover can keep their systems dust-free with ease.

Modders will also be able to remove and paint their Define 7's top panel with ease, giving this case some easy customisation options. Fractal's Define 7 is going to be a hit with modders, and this case's easily removable top panel is just the beginning. 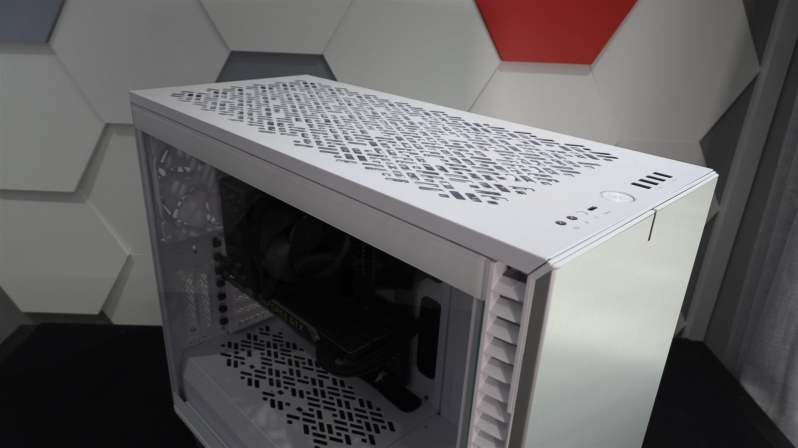 At the front of Fractal's Define 7 is two USB 2.0 ports, two USB 3.0 ports and a single USB 3.1 Gen Type-C port, which when combined with the case's standard i/O options will deliver everything a modern system needs in terms of connectivity. 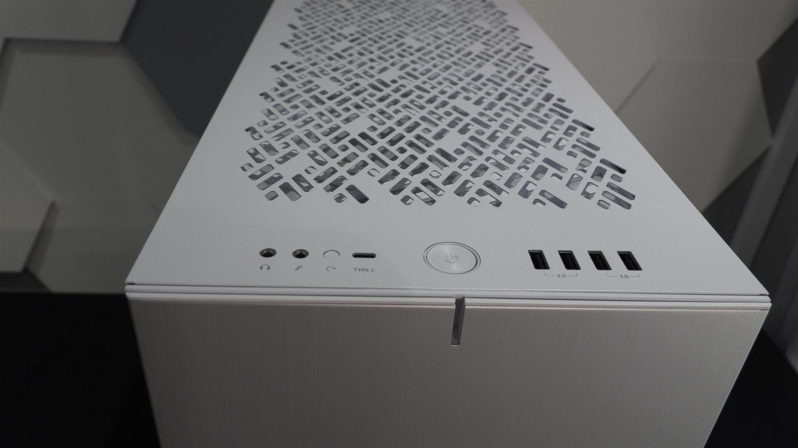 On the top of the PSU shroud of Fractal's Define 7 sits a large meshed section. This mesh hides the mounting holes for two 2.5-inch drives and allows a power supply to intake air from inside the user's PC. This option also allows additional airflow under the shroud, especially for users of three front-mounted fans.

while on the surface, this meshed design is an aesthetic feature, it actually serves a number of alternative purposes. This is some excellent design work from case boffins at Fractal, well done. 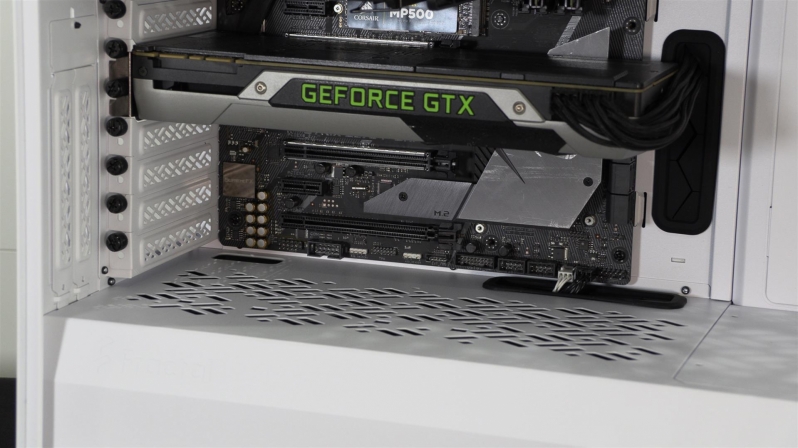 Users of Fractal's Define 7 are also able to remove the entire top panel of their enclosure, allowing for the easy mounting of water cooling radiators and other components. Even users of air coolers will benefit from the extra space that the removal of this top panel offers.

Looking closely at this case's top panel, we can also see mounting positions for a water cooling fill port, highlighting the extensive water cooling support which this case offers. Not many cases offer mounting locations for fill ports in their stock configuration, but Fractal has with its Define 7. 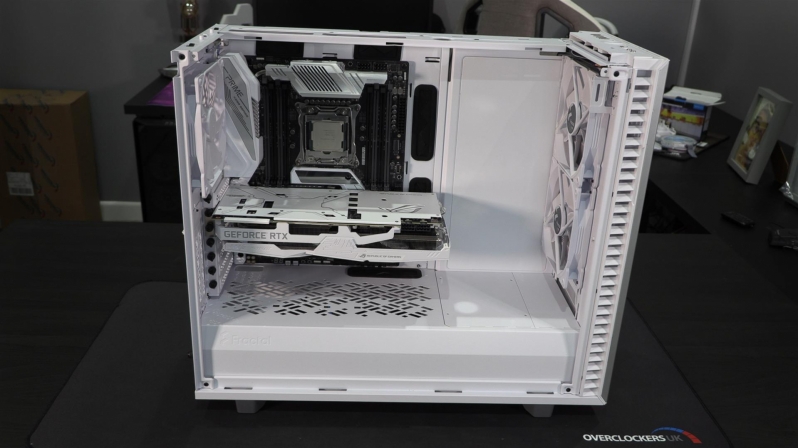 Unlike many of their peers, Fractal has considered all of their users when designing their Define 7. Below we can see two removable sections of their case's PSU shroud, with the first being for users of an additional front-mounted fan and front-mounted all-in-one liquid coolers while the second is designed for users of a large number of HDDs and large water cooling radiators with push/pull fan configurations. 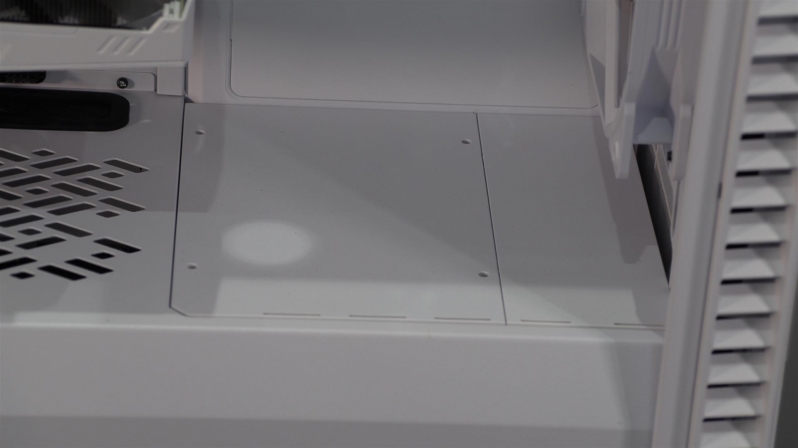 Moving to the rear of Fractal's Define 7, and we can see that there is ample room for cable management, with the case offering users 30mm of cable management space and plenty of velcro ties and regular cable tie clipping locations.

The cable-blocking plate at the base of Fractal's Define 7 can also be removed to allow the easy routing of additional cables, while also allowing for some extra clean cable routing runs. Cable management is a breeze in this chassis, which is great news for both PC building veterans and newcomers to the PC building scene. 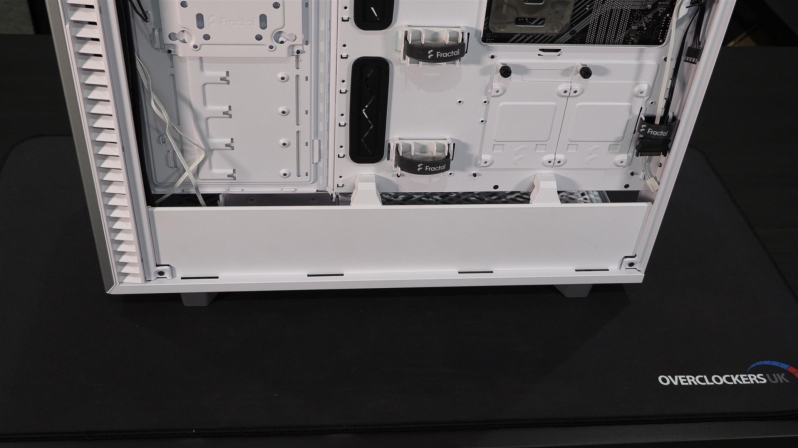 The image below shows what the Define 7 looks like with the above plate removed, revealing the case's two stock HDD mounting locations. 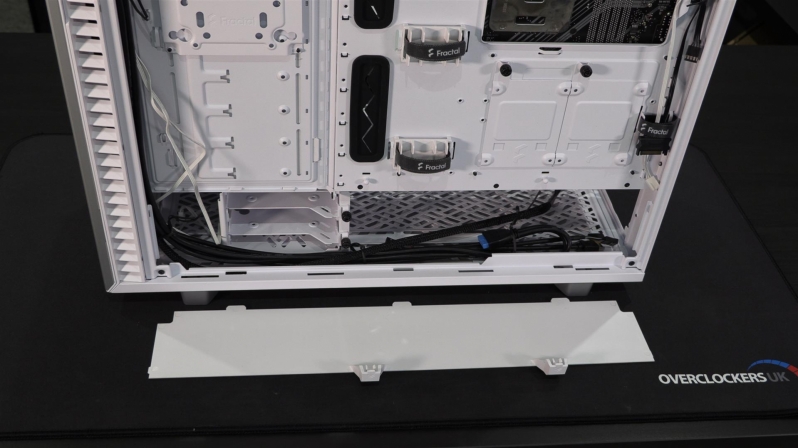