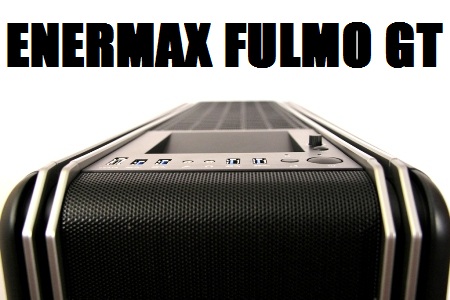 I arrived home from work just before Christmas to be greeted by a "sorry we could not deliver your package" leaflet, informing me said package had been taken to the local post office where I could pick it up.  I wasn't actually expecting anything through the post, but my good lady was, (a small pressie for me by all accounts) and so she quickly announced she would take a quick trip to the village post office to pick up said little package.  Some 30 minutes later she re appeared hot and bothered and using the sort of words you would normally expect to hear from a sailors parrot. Turns out it wasn't the expected "little package" after all, but the Fulmo GT which had arrived courtesy of Enermax. Apparently it took her and the lady at the post office by a good 5 minutes to heft the box out of the post office and into the boot of the car.

So as you've probably gathered it's a big case.  Big enough to take on the largest twin CPU motherboards, including the mighty SR-2 and as many of the largest and most immense GPUs that money can buy.  The "GT" in the name does not imply that this is a "Grand tourer", and as such the perfect case to take for a long drive across Europe, rather that it is a "Giant Tower".  Measuring a staggering 640mm in height and 674mm deep there's enough room in this case for a party.  So if you've just won the lottery and have splurged on the best and biggest hardware money can buy, and are looking for somewhere big enough to put it, or perhaps if you are simply looking for a case with plenty of room for air or water-cooling options then perhaps the Fulmo GT might be worth a look.

Solidarity
To question the looks of this case simply because it resembles another would be a bit like saying "yeah his girlfriend is attractive, but she looks a little bit too much like Claudia Schiffer don't you think?"

This part of the review reminded me a lot of Jeremy Clarkson reviewing the Jag XK. Anyway, the first thing the case reminded me of was the CM690, only with rubber gromets inside.Quote

SieB
Good review and it looks like a decent case.

I have a 690 II ADV sitting right next to me though and damn they are almost identical in looks. The Fulmo GT does improve on the looks though and it is obviously bigger and has better features and options.Quote

sources95
Ive been waiting for tom to rip this case apart

awsome review as per usual.Quote

tinytomlogan
Quote:
G-dubs did this review dude not me

nothingspecial
Price is the killer for me. If it was around the £100 mark I could cope with modding the bits I didn't like, but at £180 it doesn't even get a look in.

From yet another 690II owner. And it's a white one, thanks to Snow Drift