When I received the R1 for testing I remembered what Tom had said to me on the phone a few days earlier  "If you like the quality of Noctuas, you're going to love the R1".  I have to admit to not really following what he meant, that was until I started to unbox the R1.  The first thing that greets you when you pop open the lid is a slide out compartmentalised tray that contains all the fittings you could ever need for a whole host of Intel and AMD chips.  You also get a sealed warranty card and instructions, as well as additional spring clips, vibration dampeners, a fan splitter, a screw driver, a tube of TIM, a cuddly toy, a fondue set and a picnic hamper.  OK, so you don't get the last 3, and you'll have to be the wrong side of 40 to get the reference, but you get the idea. 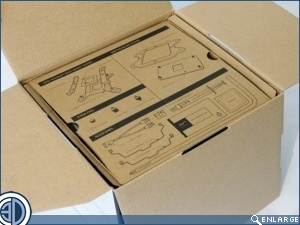 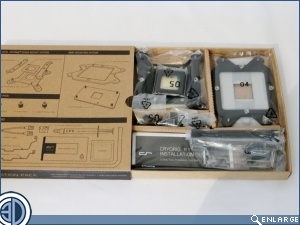 The R1 Universal is an almost identical model to the R1 Ultimate that we'll see on the next page.  The variance of course being that it has a low profile front fan which will enable it to be compatible with any RAM as it won't overhang the first RAM slot. 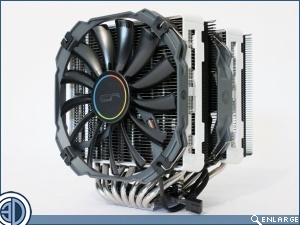 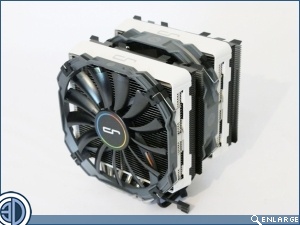 The cooler is a bit of a hotch potch of colours, moving from a grey front fan, through a white cowling, to a black fin stack, then to another grey fan and white cowling before terminating in a black fin stack.  Viewed from the rear however we can see that the seven heat pipes are very well distributed into the stack, which should greatly aid heat transfer.  What isn't immediately obvious from these images is that the number of fins and thus fin spacing differs between the two fin stacks, with the rear stack having more fins, more tightly stacked than the front.  The idea here is that as the air is compressed it will be forced to leave the stack more quickly and so aid cooling.  Cryorig have dubbed this their Jet Fin Acceleration System. 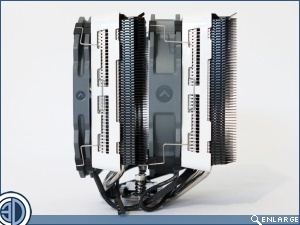 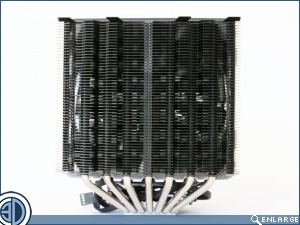 Here we can again see the striation of colours as we move across the top of the stack, along with the way the heat pipes are displaced antero-posteriorly within the stack as well as being laterally separated. 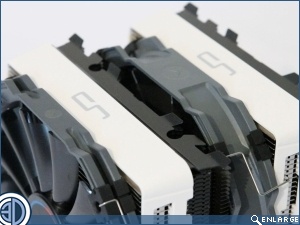 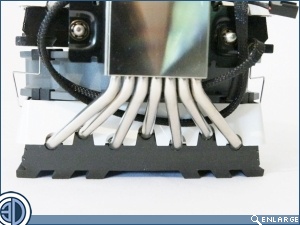 The R1 fills a good chunk of the interior of our new test rig, but was actually one of the easiest coolers in the Cryorig group to fit, thanks to the "Multi Seg" Quick mount system.  Although it's massive, a quick zoom into the front fan area does in fact reveal that there is no encroachment on the RAM slots, meaning that as stated there's a 100% RAM compatibility.  If though you're mounting this on a 2011 board, or anything else that has an additional set of RAM slots towards the rear of the Motherboard, you might want to remember the 35-40mm RAM height limit does still apply round the back of the cooler.  As anticipated, the R1 universal did well in the torture tests coming fifth overall and only 2.5 Degrees off the all conquering NH-D15.  Not bad for a cooler that can be used with tall RAM. 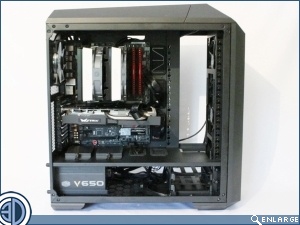 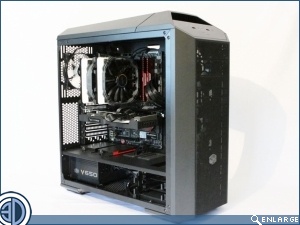