The Olymp is the top of the range model from Alpenfohn, and it surely is a beast.  The packaging is very nice with all the individual sets and fans being separated into their own boxes within the main packaging.  Also included is something we've not seen before.  The "Shock Killer Pole" is basically a set of two long rods that attach the the mounting hardware and travel up through the fin stack, thus giving support to the system during transport. 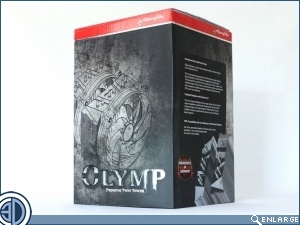 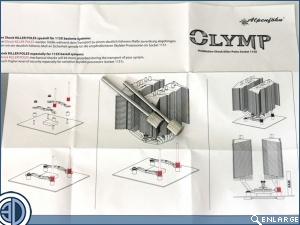 The Olymp is a twin tower 140mm fan based cooler configured in the traditional way with a fan at the front and one between the stacks.  Additional fittings are provided should you wish to add a third fan to the rear.  What isn't so traditional though is the interesting zig-zag layout of the fin stack. 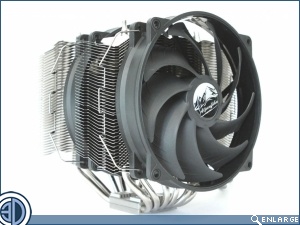 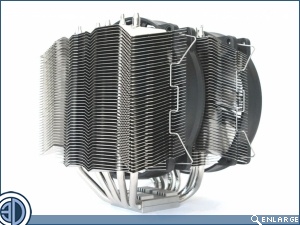 The fin stack is also off-set so as to minimise RAM issues, and although the fan does overlap the RAM it can be adjusted upwards slightly so as not to impinge on standard height RAM.  The heat pipes are unusually laid out in pairs within the stacks 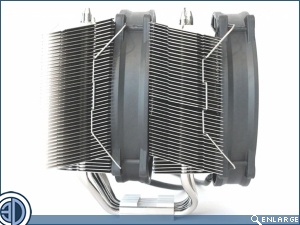 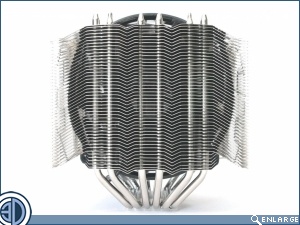 The top of the Olymp is very highly polished and with its angled appearance for some reason reminds me of the Cylons from the original Battestar Galactica.  Underneath we find that all is in order with evidence of very high quality work. 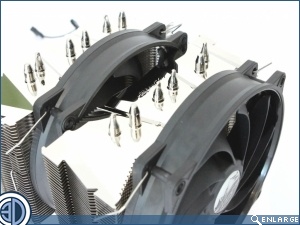 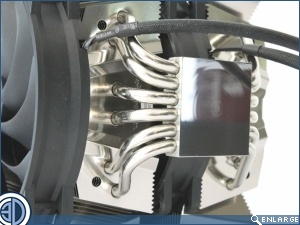 Fitting the Olymp was pretty straight forward, mainly due to the compression bar screws being situated between the two towers so as to give great access.  Like the Matterhorn before it though, the Olymp didn't feel as if it was very tightly clamped down, and could be easily moved with the hand even when all screws were tensioned down fully.  Our experience is that when this happens, don't expect good torture test results, and you know what, we were right again as the Olymp, which remember is a twin stack 140mm fan based cooler fell into the bottom quarter of the performance charts.  To be honest really quite shocking performance for a cooler this big. 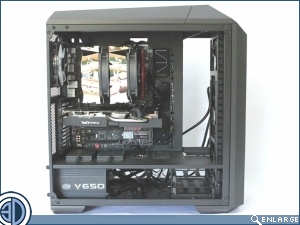 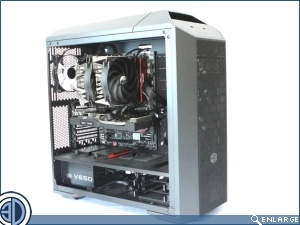