We're not entirely sure what this cooler is the Black edition of, as it's name is simply that, "The Black Edition".  Anyway, Gelid have given it a kind of cool name, so who really cares.  The other thing Gelid have given it, is ample packaging and protection.  Gone are the blister packs, and in there place carved slabs of expanded polystyrene. 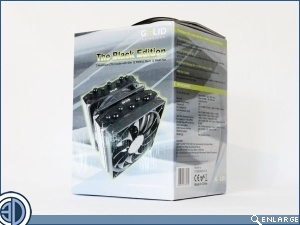 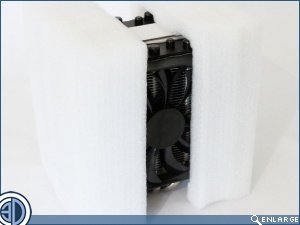 The twin stack cooler is based on the 120mm fan and isn't as massive as some we've looked at.  Ceratinly the 160mm height and just 109mm depth shouldn't cause too many problems. 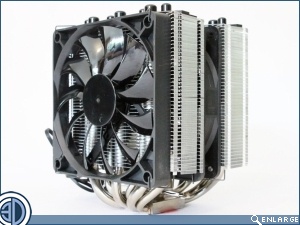 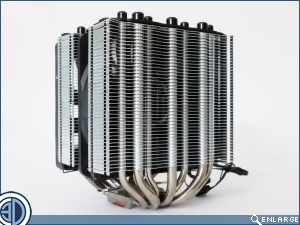 Gelid quote seven 6mm heat pipes, however, to us it looks more like three 8mm and four 6mm pipes.  Certainly four of them are thinner than the other three.  To fit this many into the contact plate Gelid have chosen to double stack two of the thinner pipes above and inbetween the larger ones.  After leaving the contact plate, the pipes spread evenly up the fin stacks which should afford for some decent performance. 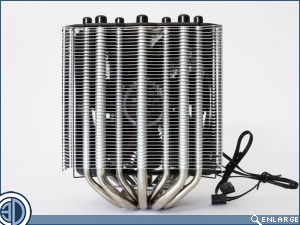 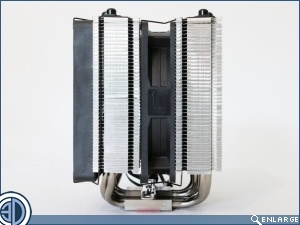 Although the body of the heat sink is left in its natural Aluminium, the top does have a rather attractive perforated shroud covering.  This covering is Matt Black and is counterpointed nicely by the gloss Black pipe end caps and the gloss Black slim front fan.  Looking underneath we get a better view of the heat pipe design, however we can also see what a mess the soldering is down here.  Why do we keep going on about the soldering?  Well if it looks crappy on the outside, the bit you can see, just think how crappy it's likely to be on the inside, and a crappy soldering job means that the heat won't get conducted away from the contact plate to the heat pipes as well as it could. 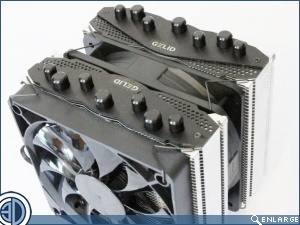 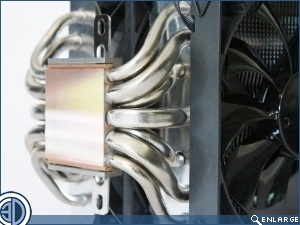 Thankfully Gelid modified their mounting system slightly from that used on the other two coolers, opting for a screw down central brace type system.  Although better, it was still astoundingly fiddly, with the narrow space to put your fingers into with the screw on the end being slightly reminiscent of trying to interfere with a woman when she was still in the next room!  And as for performance, well when you think that this is a twin stack 120mm fan based cooler, it really should have done better than coming 4th from last in the 120mm fan based charts, as this means it was beaten by many, much less massive and cheaper 120mm single stack coolers.  One saving grace it does have though is that it looks the part. and will fit in well with pretty much and case interior. 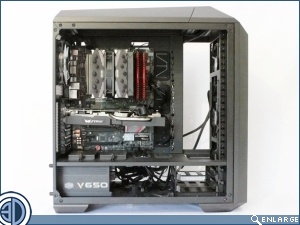 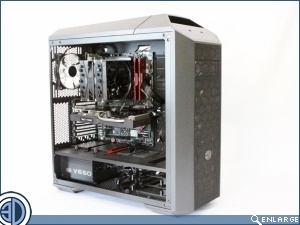