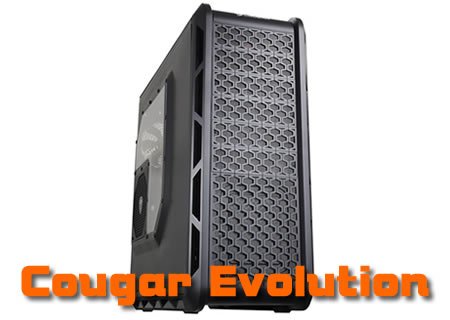 Cougar are a name many of us would recognise as being a manufacturer of power supplies rather than cases, but with more and more brands adding different product lines to their bow its not surprising Cougar have decided to give it a crack as well. The Evolution is primarily aimed at gamers so after staying up all night and being high on an overdose of caffeine I give the Evolution a thorough going over in the way its designers intended! 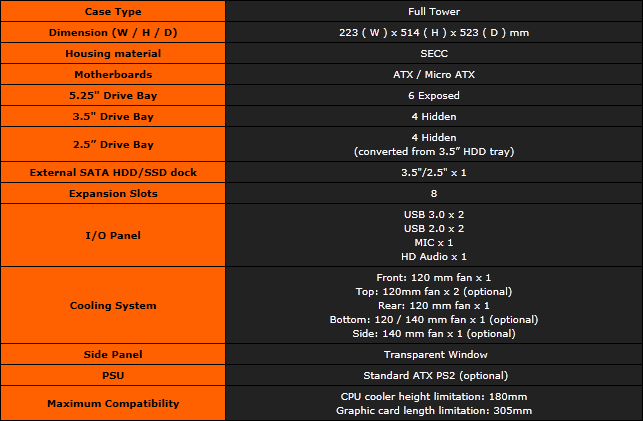 So have Cougar cracked it with the Evolution? The answer is they have come pretty close, the styling maybe a bit Marmite but I have a feeling that it will please many of the 'gamers' out there. It has some chunky styling elements but they all get balanced out by some other cleaner lines so all in all it seems to work pretty well. The large hexagon mesh is a feature I personally really like.

The hard drive bay is removable but I have no real idea why, it's normally to allow large graphics cards to be fitted yet its not really needed with this case that and the fact there's nowhere to put your HDD's afterwards. Should you have an SSD you could remove the HDD bay all together to help with the with the airflow from the front fan.

The HDD dock in the roof will please many of you and like the side panel fan is yet another aspect of the gameresque designing. The rubber top will actually help with HDD vibrations when being used which is a very nice well thought out touch. Add to this the fan controller and the ability to disable and activate two separate fan groups and it's becoming apparent a lot of thought has gone into the features on the chassis. I do wish they had used orange graphics and leds in the front of the case rather than the misplaced blue to have fit in with the design of their fans and PSU's, in this instance think it would have worked far better with the gaming features of the case.

The case comes with a front and rear fan out of the box but I would honestly recommend fitting one in the roof and either one in the floor or side panel to help keep your components cool as it doesn't appear to be the most freeflowing of cases with just 2 fans fitted. Once a couple extras are fitted however it performs very well and quietly too.

The long and short of it is the Evolution is a very good chassis, not quite great but its definitely a chassis that should be on your shortlist due to its long list of features, great price and gameresque design, because of all this we have decided to give it not only the OC3D Silver award but the Gamers Choice award as well. 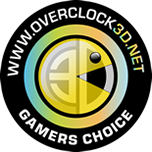 Our thanks to Cougar for the Evolution we tested today, you can discuss your thoughts in our forums.

Alicarve
I do prefer the look of this case to the haf x, good review as always

SieB
Yep, definietly looks better than the HAF, still not a looker imo though. It is competitively priced but I think there are other cases in the same price range that offer a lot more but Cougar have done well seen as it's only the second case they have made.Quote

steve30x
That blue background is a whole lot better in the videos tom.Quote

tinytomlogan
Quote:
Is deffo better, still a WIP with the lights thoughQuote

badtaylorx
ive been recommending this case on TH for a cppl months now.....glad to see im not the only one who likes it!!!