Corsair VS NZXT Battle of the AIO Watercoolers 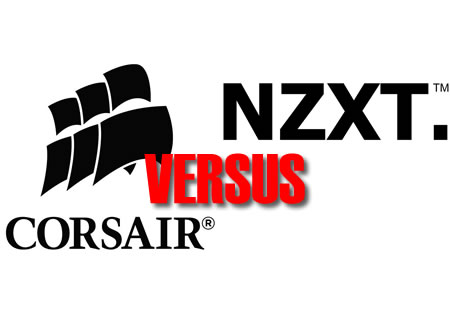 So the main idea of this review was to compare the new 140mm fan based coolers with the older 120mm ones. Initially we didn't think the Corsair units would get here in time but it was great to put them side by side with the NZXT's. The only real difference is the built in fan control and the LED on the front of the NZXT's. The cables are fixed to the NZXT's though and will need some clever fitting to not add too much clutter around the CPU area of your rig; it can be done but we foresee a lot of lazy installations.

The first thing to consider when choosing between the two is the spacing between the fans. The Corsairs are 20mm and will fit most Corsair cases, NZXT is 15mm which we think will end up becoming a standard as it did with the 120mm rads. Its worth noting a wide range of cases do support both, the CM Storm Trooper for example has elongated screw holes so that it can fit both of these units. In any case this should be you first consideration when looking at buying either of these.

Secondly it would be price, the Corsairs are much more stripped back and aimed at value. For example H110 is £25 cheaper than the X60 and comes with a 5 year warranty rather than NZXT's 2 year warranty. So you pay £25 more for the fan control LED on the front of the unit and 3 years LESS warranty cover.

Thirdly it's the fan control. The NZXT's have it, the Corsairs don't. It will really depend if you have your own fan controller or plan on changing the fans. If either of the answers to these are "yes" then we would save the money and get the Corsair because otherwise you are paying for features you don't need, will use, and its less cables you will have to try and hide.

So he AIO's from both brands perform very well with only really the fans to separate them, other than that performance wise they are identical. We have swapped the fans about to check this but we already know under the hood they are exactly the same. NZXT did favor a 2000RPM fan and for that reason alone is why they perform better. We do think that both fans are mediocre at best and think that a better designed fan could bring out the best from these units. To prove this we have got some Noctua 140mm static preasure fans in to prove that these units can perform well and be quiet. After all this testing it will be a good few weeks before we want to be doing any more testing!

Surprisingly our thoughts from this review may go against the grain with both manufacturers, because if it was our money we would buy the H100i. Why? Well performance is still great, prices have fallen a great deal, Aria have them for under £88 at the time of writing the review. Fan upgrade options is obviously much bigger with the 120mm layout but the single biggest point would be most performance cases support it with no faffing or worrying, you could even go as far as to say many case manufacturers design them to be able to support the layout of the H100/H100i now. Lets face it at £88 its almost a no brainer purchase.

So we Award the Corsair H90 and the NZXT Kraken X40 a very generous OC3D Silver Award. Noise levels are beyond what we expected for a 140mm fan based unit and for the noise they do create the temperatures are just not low enough in our eyes.

The big daddy gold award goes to the NZXT Kraken X60 and Corsair H110 in main part for the awesome temperatures. They are both a little rough around the edges and think they both have areas in which they can make them better all round performers.

Thanks to NZXT and Corsair for the samples tested here today, you can discuss your thoughts in the OC3D Forums.

UkGouki
thanks for this tom

now to fend off the trolls, because Tom said Corsair.. jeez
i see another troll video.. 4 stacked H100i rads with only 20 fans because we
want it believable... sub-zero cooling anyone? LOLQuote

Vlada011
I love CORSAIR.
But I would stay at 2x120mm, 240mm radiators.
They are always better for me.Quote

Smoke2049
Very helpful and the timing couldn't be better i was literally just going over which cooler would be best for my new build , Thanks TomQuote
Reply