Anyone who has followed OC3D for a while will know how much our leader loves a white product. If a company can produce a white one, we're getting hold of one and seeing how it looks.

It used to be that any attempt at white hardware quickly became a colour we like to refer to as "disappointing yellow". However, since the release of the Z97 Sabranco many moons ago, companies have proven not only capable of producing white components which remain white for years to come, but have adjusted their design philosophy to better show off this most pale of hues.

All of which brings us neatly to the latest additions in the Corsair Elite Capellix range, or perhaps in their H100i/H150i range, depending upon your viewpoint. The Elite Capellix combines an RGB pump with RGB fans and wraps it around Corsair's famous and successful AIO. It's common to see AIOs with RGB pumps these days, and you might get a few that provide you with RGB fans, but getting one which provides both of these things is much rarer than we'd like, particularly as RGB AIOs is the easiest way to get some delicious lighting into your system.

Rather than bang through a load of tests to prove that the white Elite Capellix are just as capable as their black counterparts, let's instead do a quick run through the looks and show you a video. After all, saying that the Corsair AIOs are good is like saying these words are written in English. Too obvious to bother with. 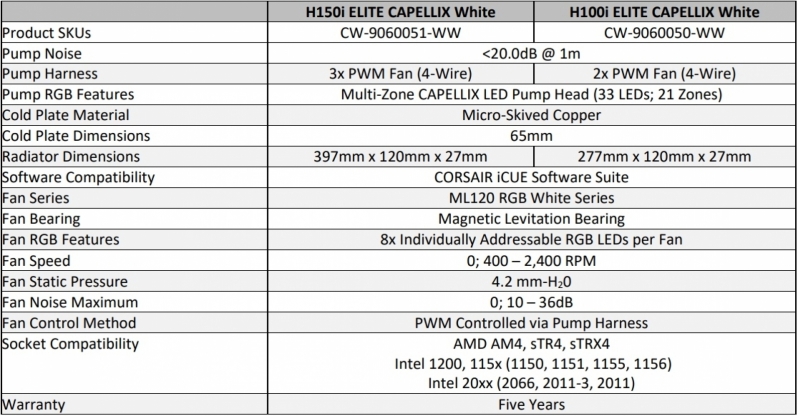