Unlike most fitting methods that use a back plate with spaced and separated notches for the various sockets, the H75 backplate uses a system whereby the mounting hole is extended on a pin that passes through from back to front making locating the mounting bolts on top of it considerably easier.  Each of the four protruding pins is located in a small sliding aperture, causing the pins to quickly find their own seating and position dependant on the CPU socket and therefor mounting hole location.  Sounds complicated, but it's actually one  of the simplest and most effective methods we've seen yet. 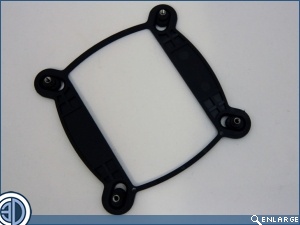 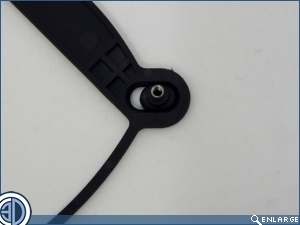 As we're using our socket 2011 test set up we won't actually be using the back plate, so it's onto the next step which is the insertion of the mounting bolts.  Separate bolts are supplied for the various socket types and are each easily identified. 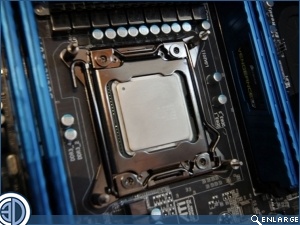 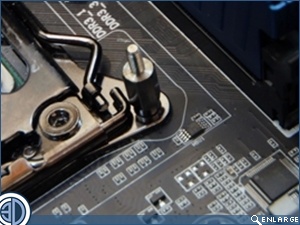 The instructions recommend that the radiator is attached to the case before mounting the cold plate.  As we're essentially making a radiator sandwich it makes sense to attach the inner most fan first using the supplied bolts.  Attaching the rad/fan assembly to the rear of the case while simultaneously passing the bolts though the second fan is quite fiddly but can be done with minimal swearing and pales into insignificance next to the anguish caused by fitting the V8GTS a few weeks back. (the physical scars are healing but the mental scars will always be there).  While fitting the rad it's worth finding a safe place for the cold head to dangle as the last thing you want is it swinging about and knocking a cap off your mobo. 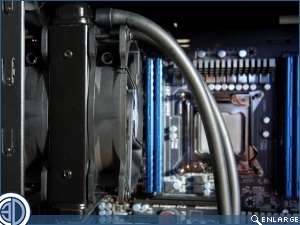 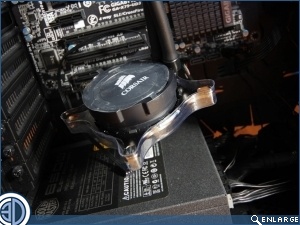 With the rad in place we can attach the cold plate.  Offering up the assembly to the motherboard, simply slide the grooved mounting holes over the threaded ends of the four mounting bolts.  At first you might think you've got something wrong as the holes are much bigger than the pins.   All becomes clear as you tighten down the final securing bolts, realising that they are tapered on their under-surface, again to aid them in finding their own centre. 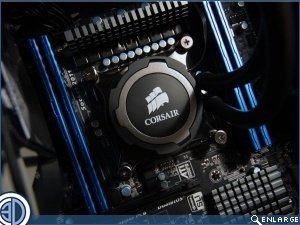 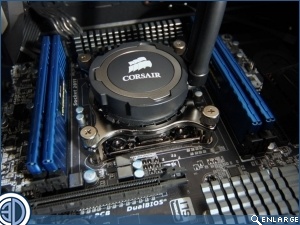 The pump is connected to any 3 pin socket, with the fans being either wired up individually or together via the supplied 4 pin PWM splitter.  As this is an AIO, that's all there is to do.  The attentive amongst you will notice that we've set up the fans on intake as this is how Corsair instruct it to be done, pointing out as they do Newton's Law of Cooling.  Corsair also urge you to consider the fan set up in the rest of your case to ensure that there is sufficient extract for the warm air.  In reality the fans can be mounted as an extract set up with only a degree or two of difference being made in the temps.  In fact, if you haven't got any ventilation in the roof of your case we would recommend that you set up as extract.  For the purposes of our testing we swapped the fans over to extract so as to re create the same conditions that all other AIOs are tested under. 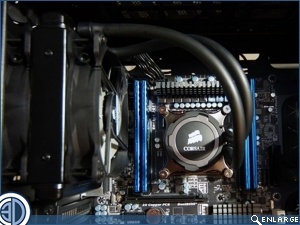 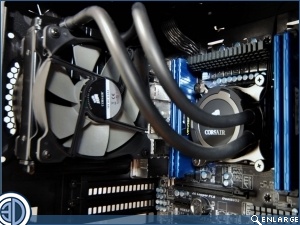 Our trusty Cooler Master "Test Trooper" does somewhat dwarf the H75, but then it's more likely that this cooler will find it's home in a mid tower or given it's diminutive dimensions even a SFF or cube case. 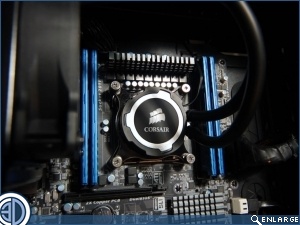 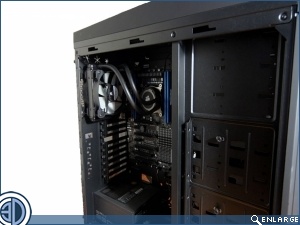