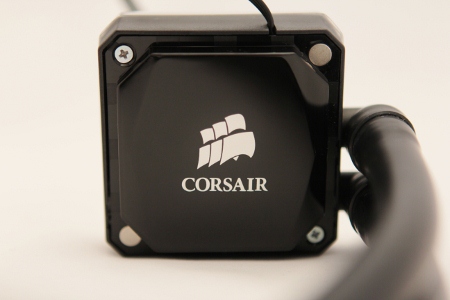 Unless you've had your head in the sand of late you'll know that Corsair have not only moved away from traditional CPU air cooling, but have also been refreshing their "Hydro" Series of AIO water coolers.  We've already taken a look at a cross section of the range back in January in the "Battle of the AIOs".  What we didn't do back then was have a look at what could be thought of as Corsair's Entry level AIO water cooler.  With the H60 costing just £60 it's price places it not only into the more affordable end of AIO water coolers but also into the same sort of territory as some of the larger Mid range traditional air cooling units.  However  unlike the larger air coolers the H60s diminutive size means that you're not going to have to worry quite so much about case compatibility and RAM encroachment.  Indeed, with SFF and HTPC becoming more popular the H60 potentially offers the ability to cool an overclocked chip in a case where the fitting of a large tower just isn't an option.

However even if you haven't had your head in the sand it's not barn door obvious from the naming of the H60 that this unit replaces the older outgoing H60, as the two share the same name.  Gentlemen, we give you the H60....Which replaces the H60...Eh?  Fortunate then that retailers have taken things into their own hands are referring to this unit as the V2.  Under the skin they are quite different, with the new unit sporting  a revised block and pump, along with rubberised as opposed to corrugated tubing, and even a new fan for the Radiator.

FTLN
Been waitin for this one, might have to rma my original to get one of these back

EDIT. Refreshed the page and there it was - BOOMQuote

tinytomlogan
Quote:
I need the thread here before I can put the review live dude. Just need to be patient

Ok, I just happened to open thread just before you provided the link then.

Thx for a clean honest review as we have come to expect from OC3D.

1 thing - I really would mind the graphs being sorted by best performance cooler (delta -load) if at all possible?
Although its not to much of a hassle comparing with the other logical contenders so not that big of a deal if rearranging graphs is a large job.Quote
Reply