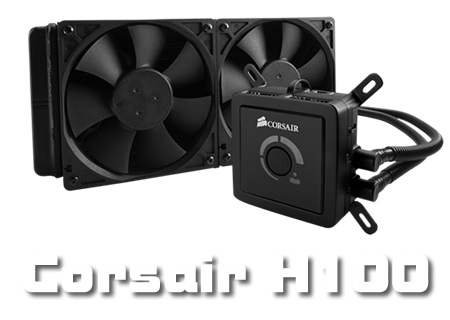 So we finally have the Corsair H100 in the OC3D labs. You all know it's the range topper in the Hydro series and you really don't need us to waffle on with needless introductions. Mainly because we have been inundated with requests to test the H100 since pictures were first leaked a few months back. So lets not waste time and get straight on with the specifications and testing.

Moving on to the 4.4GHz tests which we run at 200x22 with a 1.45v Vcore. The reason why there are not many results in these  graphs is because these are the ONLY coolers we have tested that have passed this hardcore test.

So you've seen the graphs, possibly watched the video and are bound to have noticed a Gold Award at the bottom of the page. "You best explain this and fast" I'm hearing you say in your strictest voice, thanks for not using the motherly one because we are all out of cougar jokes this week.

The tests we carried out with the adjuster on the main body of the pump at both minimum and maximum levels to test the difference between the two in both temperatures and noise levels. I am happy to report that in my eyes the option of having this Jekyll and Hyde option for a Corsair unit is brilliant. Before you had to set fan profiles or use fan speed controllers because, let's face it, the fans Corsair supply are far from quiet at 12v. The simplicity of just being able to press that button is brilliant. Another positive note is even if you have the dial all lit up and everything set to max when the system is at idle of low temperatures the unit will still slow the fan speeds down with them only ramping up once the temperatures start to rise.

So when testing at 4GHz the H100 was just over 2c warmer than the NH-D14, that was the only test it lost though. I say that in honest shock and I did retest  each one several times to make 100% certain. So yes as the graphs suggest when running the H100 at maximum in both the 4.2GHz and 4.4GHz the H100 was cooler than the NH-D14 and only beaten by full on watercooling kits. The trade off of these temperatures is some quite high noise levels, indeed it's far from silent. There's no taking away from the fact when testing the H100 does sit quite nicely between the air coolers and "proper" watercooling kits.

The fact you can still turn the H100 down easily is in my eyes its trump card, because its roughly a 4-6c increase but with a massive reduction in noise. So you can set your system up with some hefty over-volts and overclocks for 24/7 and still be able to keep things cool and quiet but with a flick of a switch you can unleash the full cooling power for those silly bench runs and even higher over volts that you would not want to be running 24/7.

So the recap is yes on max the H100 is still noisy like ALL of the Hydro series has been. The clever thing is though is that the fans can easily be set to spin much slower without temperatures rocketing. At around £90 the price does sting a bit, also unless you buy a Corsair case you may find this difficult to fit so its far from perfect. Taking everything into account though I think the H100 deserves the OC3D gold award and I'll openly admit this is the only Hydro I would actually recommend people buy. I just hope Corsair keep working on this range because they are definitely heading in the right direction now.

Thanks to Corsair for the H100 we tested today, you can discuss the results in our forums.

sheroo
Been looking forward to this one.

SieB
Better than expected but I personally still wouldn't buy one.

Pre-made watercooling beating the Noctua? The price of bacon better not sky rocket when the pigs escape from their pens.

On a side note, can't wait until you review the Corsair 400R and maybe the 500R later on

SieJoe
Is it me or does it just look cheap?!

You could change the fans for push/pull arrangement but more adding additional cost to an already expensive product!Quote