The Spec-01 may be a little bereft of fans, but it's certainly got the bases covered when it comes to cooloing options.  As usual we've shown the review case with our trusty Havik 120 for comparison, although at 160mm in height it is strictly speaking too large to fit into the Spec-01. 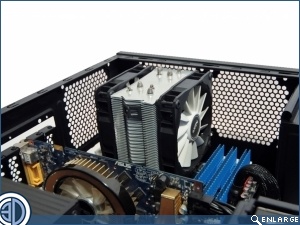 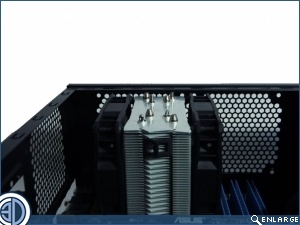 All is not lost though as the Spec-01 can take tower coolers up to 153mm in height, which still leaves a fair few on the shelf for you to choose from.  The absence of the rear extract fan and the off set roof fan mounts though do suggest that Corsair may be envisaging that you will be finding alternate means to cool your CPU. 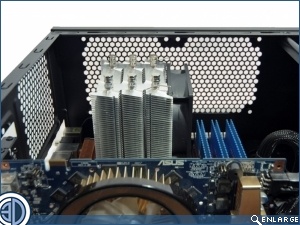 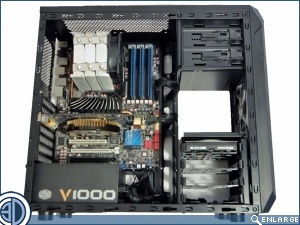 It must be stated that Corsair do not claim native water cooling support for this case.  That said seeing the off sets had us wondering what would be possible, as someone somewhere had the idea that the H100i should go in here even if Corsair aren't letting on.  As you can see, with 35mm of space away from the motherboard, if you're sporting normal or preferably low profile RAM and there's nothing else on your motherboard protruding more than 35mm it's entirely possible to fit a 240mm AIO in here.  We've actually fitted a Cooler master Seidon 240 as it's all we had to hand, but we suspect that Corsairs H100 will also fit this space just fine. 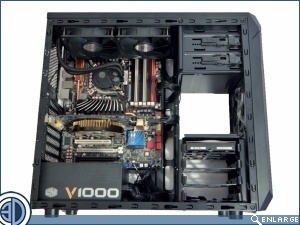 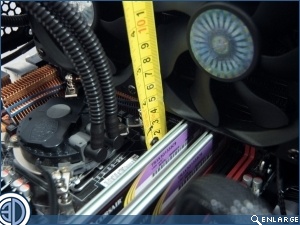 Let's not pretend that things aren't tight though, because they are.  And not just above the RAM and motherboard heat sinks either, we could only just get our screw driver onto the upper contact plate mounts to torque it down.  Still, if it fits, it fits, and that's that.  We also discovered that we were able to fit our XZPC RS240.  At 277mm long this is absolutely the longest rad you'll fit in the roof, and even then you'll have to orientate it so that the end tank is towards the rear, and appreciate that you're going to lose the option of a rear extract fan. 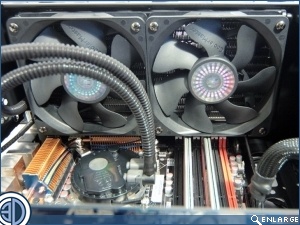 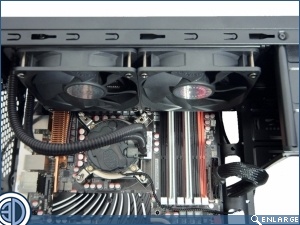 That's not where it ends though.  Remember we said the drive bay was only screwed in so could be easily removed?  And remember those additional sets of screw holes that looked to have a 15mm spacing?  Yes boys and girls the Spec001 can also take a 240mm rad in the front.  Again, it's tight, very tight, but it goes in and lines up nicely.  In fact with 130mm of space here between the front of the chassis and the anterior edge of the motherboard tray, if you choose carefully a 60mm thick radiator in push pull is entirely on the cards. 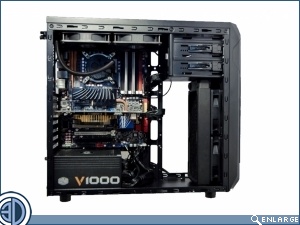 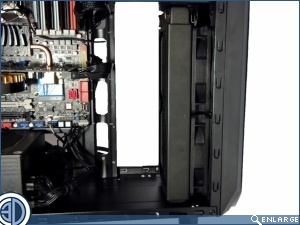 barnsley
Well done Corsair,nice to finally get a new standard set for budget cases. Now everyone else, please follow. To be totally honest though, there really isn't much competition. The NZXT source 210 is only the real competitor for it and thats much more basic looking.

-edit- Also the Silverstone RL04B is another competitor. Slightly better cable management but no window

RobCrezz
Wow, they are really nice cases for the money.Quote

This is perfect for one thing I have been tagged for in my family. Everyone comes to me to say "can you build me a pc, not much money;" Its really awesome case and I can see using it with mATX sized MB a lot for the family builds.

It is good to see such a great case at such a low price point.Quote