First, we will take a look behind the 678C's clean exterior, revealing a large removable fan filter and space for a 5.25-inch drive bay, a feature that makes the Carbide 678C one of the few modern Corsair cases that offers support for optical disk drives.

At stock, the Carbide 678C has a single 140mm fan at the front of the enclosure, but the case can support either two 140mm fans or three 120mm fans depending on the user's preferences. Airflow at the front of the chassis will be restricted by the case's flat front panel, with the enclosure offering very little breathing space, which is a problem that is common to most silence optimised PC cases. 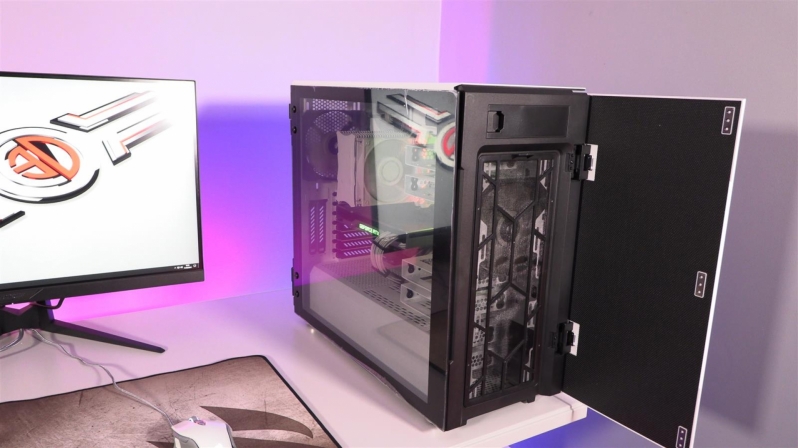 At the top of the 678C, we can also see power/reset switches, a USB 3.1 Gen 2 Type-C port and twin USB 3.0 ports. The power/HDD activity LEDs on this chassis are blue, which limits this case's potential colour matching options. White LEDs would have been preferable. 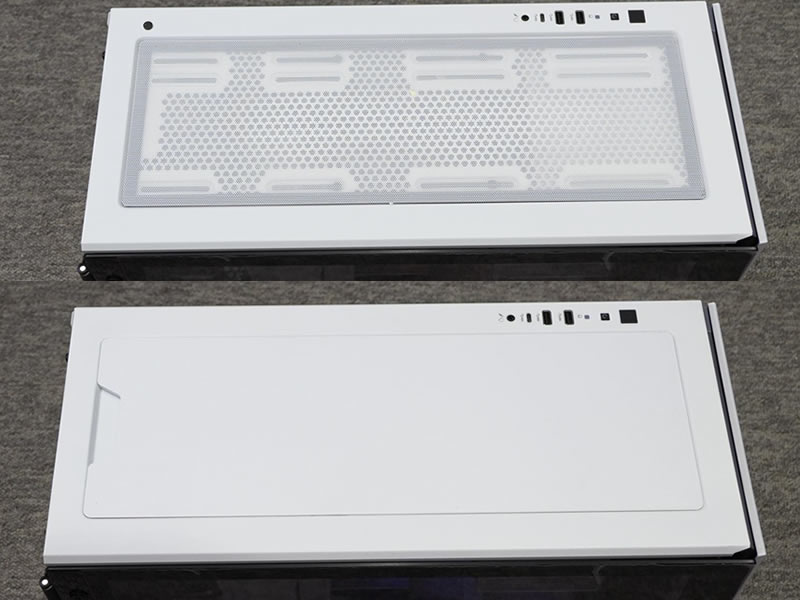 Moving to the rear of the case we can see that the 678C offers several high-end features, providing support for a vertical graphics card mount, a hinged tempered glass side panel and a large 140mm exhaust fan, which ensures that the case can contain even the largest of air-based CPU coolers. You can fit the likes of a Noctua NH-D15 in here with relative ease, a feat which is not guaranteed on PC cases with 120mm rear exhausts. 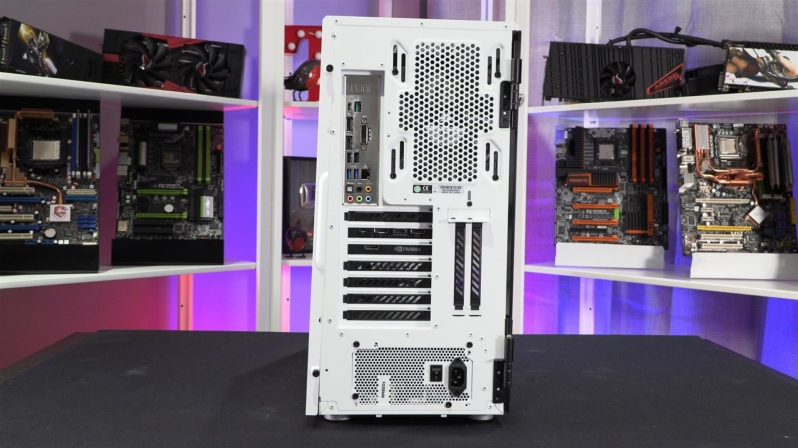 Looking at the rear of the case we can see that the Corsair Carbide 678C ships with three 3.5-inch HDD mounting locations, with two coming under the PCU shroud while four more are available inside the case's main compartment. All of these 3.5-inch HDD slots are removable, but Corsair only supplied two slot covers with the case.

This is hugely disappointing, as those who remove any of the case's HDD bays will be greeted with an unsightly hole in their enclosure and those who want to use all eight possible 3.5-inch HDD bay attachment zones will need to somehow acquire two additional 3.5-inch HDD bays. When this case is said to coast £179.99 in the UK, you would think that Corsair would supply users with all eight possible HDD mounts and six bay covers for those who decide to remove them, but they don't.

You can also see that the top three cable management holes also lack rubber grommets, something which won't be noticed if users have a top-mounted water cooling radiator but will be incredibly noticeable for users of air cooling. With Corsair providing a component which blocks the 678C's top fan mounts, it is hard to see why Corsair would remove these grommets, as this section of the case is obviously designed to be used both with and without water cooling radiators. In short, this aspect of the 678C isn't well thought out. 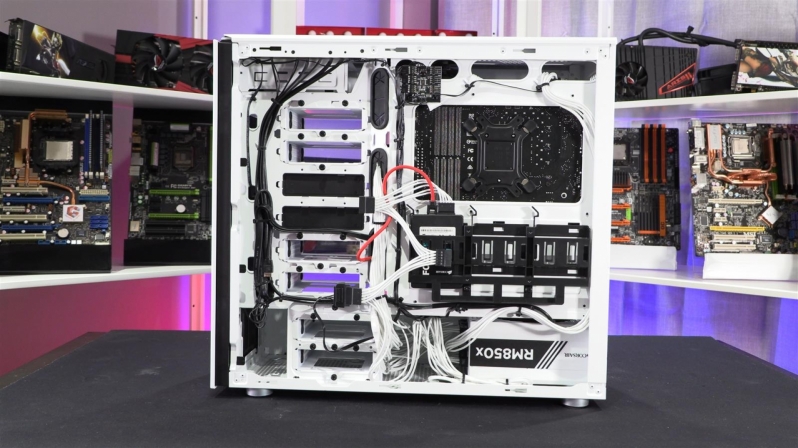 It is obvious that you can build a clean system with Corsair's Carbide 678C PC enclosure, with our all-white CPU cooler and Nvidia's Founders Edition graphics card designs fitting well in the case's white version, especially when used with white PSU cables.

In this image, the lack of rubber grommets in the top cable management holes are very noticeable, and the same is true when the case's side panel is attached. This makes this section of the case seem cheap, which isn't something which we believe should be said about a £179.99 PC case. 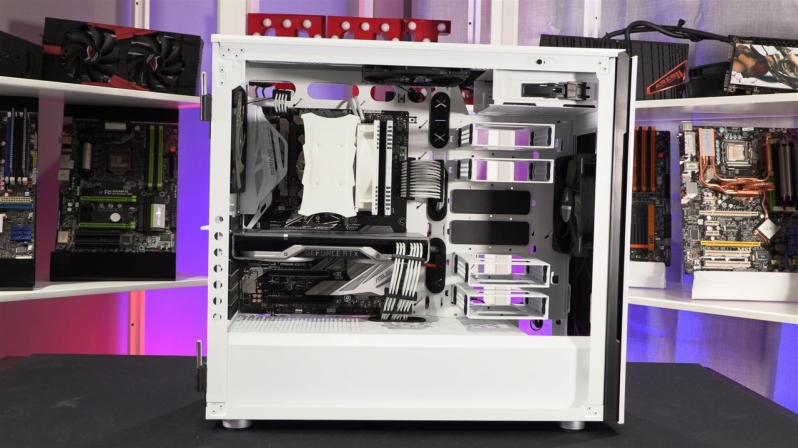 One of the first thing that we noticed when we were looking into the chassis what that there was a defect around many of the cases rivets, where Corsair's powder coating failed to adhere to the surface of several of the case's structural joints.

This is a defect that should never have left the factory, and at this time we cannot be sure whether or not this defect affects other white Carbide 678C cases. If we'd just spend £179.99 on a PC case, this kind of defect would be hugely disheartening, especially if you purchased matching components.

Corsair has been in the case game for a long time now, and such an error cannot be called anything less than a huge disappointment. We hope that this manufacturing issue has already been addressed at the factory level, but this case should never have passed any form of quality control check. 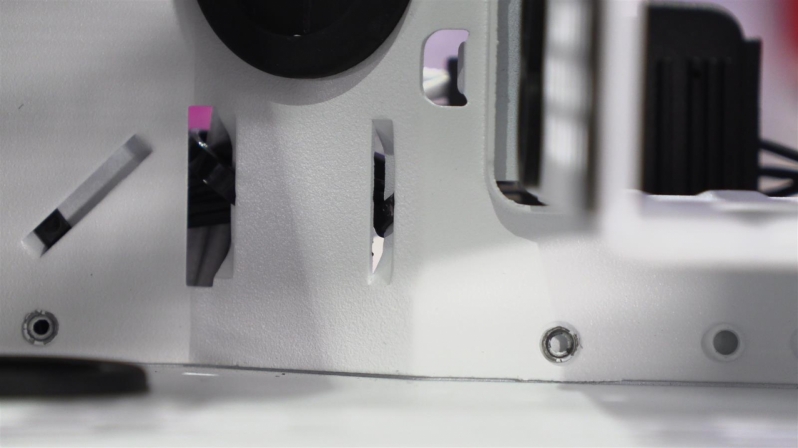 Another minor gripe that we have with Corsair's Carbide 678C is this huge gap at the front of the enclosure. Yes, we know that it enabled the mounting of large radiators, but many of Corsair's peers have supplied their cases with removable covers which enables their enclosures to offer a cleaner appearance when water cooling radiators are not installed.

When looking at this gap it was hard of us not to think of potential mods that could address this issue, such as a purpose cut acrylic cover. When marketing the Carbide 678C as a premium enclosure, Corsair should have considered this aesthetic feature, especially when considering the competition's offerings. 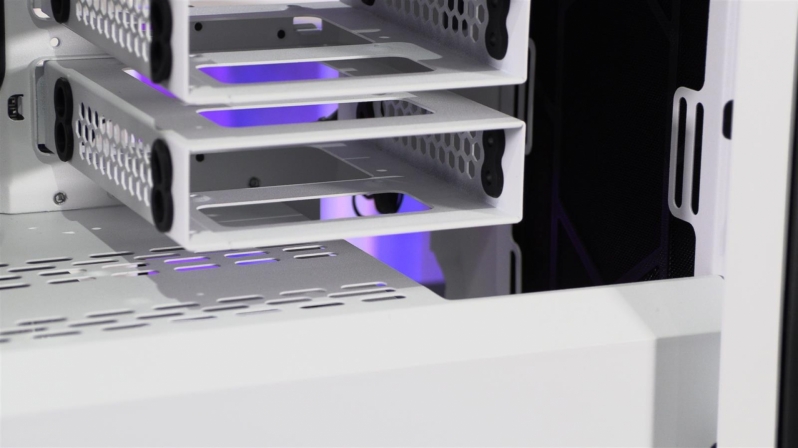 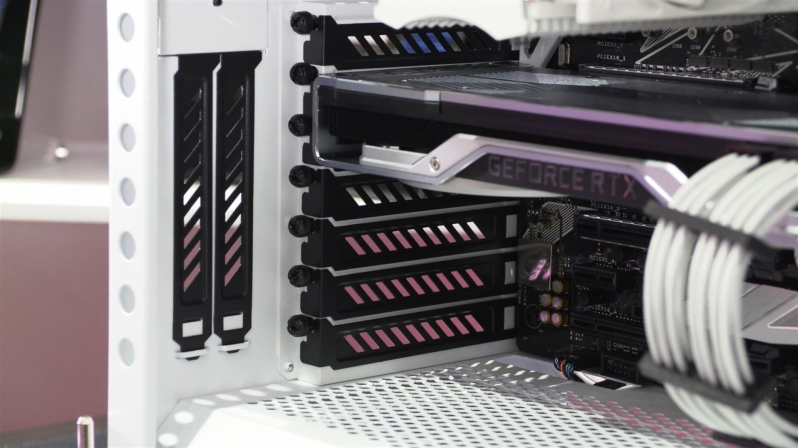 WYP
I can't wait for the bigger version, the 789! I'm really confused by the name of this case...Quote

Eddie long
Quote:
So the guvs secret is out he's a closet STEPS fan lol ,
but seriously its a shame that Corsairs stands are dropping , but i suppose that's what happens when the backer's behind them want there percentagesQuote

FTLN
I had to check the date twice on the video, this case is so 7 years ago with a glass panel !!!

Edit: Finished the video and you spoke about exactly what I was thinking towards the end, this a cheap Fractal knockoff ! !

Edit V2: Just been told that Corsair have laid most of their internal r&d team and are just reselling oem designs. So to have blooper of a case like this makes complete sense...Quote

russler
This case looks like a bigger version of a 275r I used in a budget build, must say really disappointing seeing corsair plummeting oh and that price is pure madness.Quote
Reply