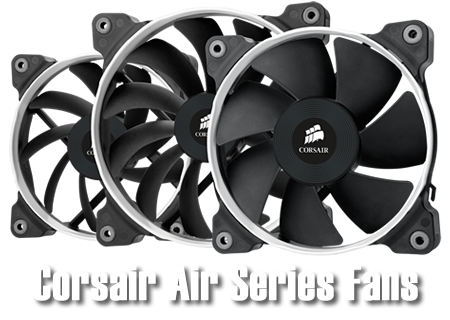 Corsair branded fans are not a new thing, not really. The Hydro series coolers all came with Corsair fans, the only problem was their mantra with those fans were "just make the coolers work" considering the users ears and mental state didn't seem to be ever taken in to consideration and its pretty much the main reason why most people left those fans in the box and replaced them almost instantly.

So recently when we were testing some other fans on the H100 we got told by Corsair to expect some 'special' fans from them very soon, instantly we thought they wont be very good or you'll need a mortgage to pay for them. So finally a couple weeks ago the assorted pack of SP120, AF120 quiet & performance editions plus a AF140 quiet edition landed at the OC3D offices. Now knowing that we had tested the H100 on a 3960X recently with a couple of different fans we thought this would be the ideal set up to test the new Corsair fans on and put them up against their toughest competition the Noctua NF-F12.

Head over the page for a look at the fans in our test system.

airdeano
they seem to tickle you pretty good. awesome review. gives alternatives of
choices with performance to back them up. currently unvolting the sp120 perf
fan and they are a schosh louder than the quiets but have 3° better performance
on a 60mm radiator (in push only) over the quiet edition. is there really a
necessity for push/pull with these. chiming on quietness, i don't think so...

Lollipop
I wasn't too sure if i wanted these or the Noctuas for my rig overhaul, and even tho i am one of the few people who like the noctua fans, i'll definitely get the AF and SP fans instead!

VengeanceUK
wow these are nice, may even consider swapping these in where i have the nf-f12's atm and put the f12's where the standard corsair h100 fans are atmQuote