Introduction
In recent times we have a variety of  cooling solutions employed by graphics card manufacturers in order to tame temperatures emitted by modern GPU's. In the thirst for better performance, enthusiasts often replace the reference cooler for an aftermarket solution in order to combat escalating temperatures. Furthermore, with the advent of multi-GPU setups like ATI's Tri XFire and NVIDIA's Quad-SLI effective air circulation becomes an absolute necessity to prevent overheating. 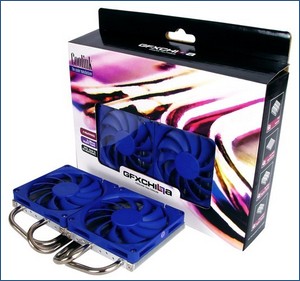 Today we have been fortunate enough to have been given the opportunity to test an aftermarket cooling solution for graphics cards - the GFXChilla manufactured by Coolink. So who are Coolink and what are they about? Let's hear it straight from the horses mouth:
Coolink is a brand of the Kolink International Corporation and stands for an effective conjunction of no-frills performance, excellent quality and attractive pricing. Coolink - the direct link to affordable high-end cooling!
Established in 1996, Coolink initially was widely known within Asia and it was not until 2005 that they emabrked upon a mission to take on the European market with earnest. Now in present day form, Coolink-Europe has now became a well recognised brand for high-quality cooling components in Europe too.
Anyway, enough of the chit-chat let's get down to business by having a look at the technical specifications of our review specimen. The technical specifications were taken directly from Coolink's Product Page.
Specifications
Height (without fan): 20mm
Width (without fan): 161mm
Depth (without fan): 115mm
Height (with fan): 30mm
Width (with fan): 161mm
Depth (with fan): 115mm
Weight (with fan): 330g
Material: Copper (base and heat-pipes), aluminium (cooling fins)
Compatibility: See compatibility list
Fan size: 2x 80x80x10mm
Rotational Speed (+/- 10%): 2000RPM
Acoustical Noise: 18dB(A)
Scope of Delivery: RAM- & VR-heatsinks, 3:4-pin Adaptor, Thermal Paste, Installation Manual
Warranty: 3 Years
MSRP: € 29,90
The Coolink GFXChilla has very good card compatibility with issues arising from only a few AGP cards and the obvious dual-GPU varieties. I have taken the liberty of including the compatibility list for you here.
Let's head over the page to have a look at the packaging and its contents...
«Prev 1 2 3 4 5 Next»