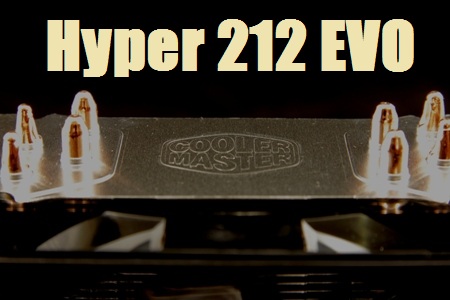 The Coolermaster 212 has been around for a little while now in the form of the original 212, the 212 Plus (reviewed here along with the TX3 Plus back in 2009).  Now in it's latest incarnation the 212 is presented as the 212 "EVO", confirming the thought that this is a further evolution of the previous models rather than a totally new design.  Retailing at £23.98 the cooler enters into a pretty competitive end of the market and will have to prove itself worthy.

So how much does the 212 EVO differ from it's immediate predecessor?  Well on the face of it, not a lot.  They look practically identical, they are essentially the same size. and allowing for inflation are slotted into the same price point in the market.  The fan mounted on the EVO does appear to be slightly different in appearance than the plus, being of the smoked black rather than than flat black variety, looking at the figures it appears to have much the same noise and CFM ratings as the older model.  So surely this isn't the same cooler with a slightly different fan?  Well as the saying goes, the devil is in the detail and the detail in question here is in the layout of the CPU contact plate.  Both the 212 plus and the EVO utilise the direct contact method for their heat-pipes, as opposed to having them embedded within the body of the contact plate.  the difference is that with the EVO the gaps between the heat-pipes are reduced thus creating a greater surface area for heat transfer and as such better cooling performance (that's the theory anyway).  click on the image below for Coolermasters own take on the differences between direct contact and Continuous direct contact. 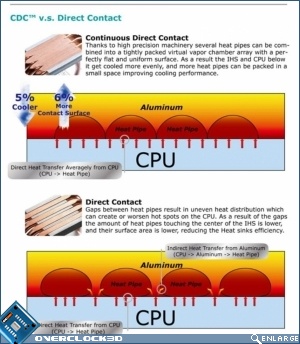 SieB
Not bad for the money, if you want to save a few quid it's perfect.Quote

SparkleDJackson
I was wondering when someone would put

integratable
IMO Xigmatek Gaia SD1283 is the king of budget coolers today. It costs cheaper than Hyper 212 plus, performs slightly better and quieter. So people, who ever wants a budget cooler, check it out.Quote

Yeeyoh
Does anyone know the difference I can expect between this (212 evo) and a coolermaster TX3? I don't do any overclocking (really) but the summers can get really hot and I don't have any air-conditioning. I've thought of other coolers but size is a huge issue as I'm using a Thermaltake V3 case and I want to keep my top fans....

P.S. thanks for the review.. I usually check overclockers3d when I want help/advice from people who know what they are talking about.Quote
Reply