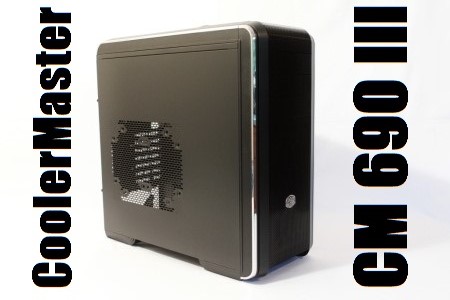 The word Icon is banded around with somewhat gay abandon these days.  Strictly speaking it refers to Christian religious imagery depicting figures of worship as an aid to devotion.  In more recent times the term has been attached to pretty much any-one or anything you care to mention, whether it be a pop group, a football player or even the "Iconic" chocolate hob-nob.  In overuse, the term then becomes somewhat diluted, losses it's meaning and drifts of into meaningless obscurity.  That is until something comes along that is truly worthy of the word.  In hushed tones we speak not of the second coming, for that was some years ago, but of the third coming (we should be so lucky), for CoolerMaster have seen fit to grace us with an update to the "Iconic" CM 690 class of cases.  Ladies and Gentlefolk, we're no experts at Roman Numerals, but pray silence as we bring you the CM 690 Eye Eye Eye.

The build up we've given this case should allude to our expectations of it.  You see the previous iterations of the 690 have been mightily impressive, and whether or not you consider them iconic it's hard to deny that they have had it where it counts.  So what of the 690 III then?  Well it's a fraction bigger, allowing more flexibility on the inside, but not so much as you'd notice from the outside, it has more than ample storage with room for endless configuration between 3.5" and 2.5" drives as well as room for tall coolers and long GPUs.  Throw in battleship build quality, native water cooling support for up to two 240mm radiators, a price tag of £85 and you might be starting to see why we're getting so worked up.

barnsley
Everytime I see this case it reminds me how much of a copy my enermax case is of this :l.

Anyway, good to see that its still a strong, solid performer.Quote

tinytomlogan
Quote:
Easy doofus I was still putting it live.Quote

Saltire35
There is an optional window panel with no fan mount.

But whether this is just available in the US, time will tell.

eBuyer usually stock the panels as they are the only place in the UK I've found that stock them as they did with previous generations of the 690.

jamesriley94
Quote:
Sure about eBuyer?
Specialtech, OCUK and Scan, along with a fair few others stocked the CM690-II's windowed side panel, and did it for about £8.

I never saw eBuyer have them tbh, although I don't really use them anymore.Quote
Reply